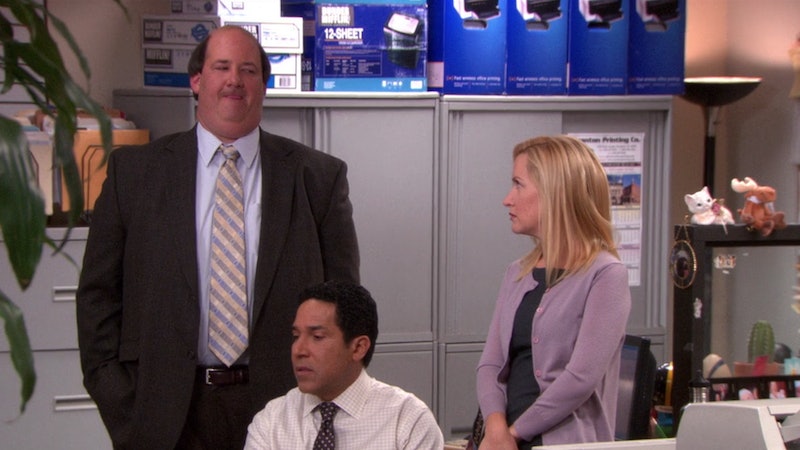 Five minutes into speaking with The Office's Angela Kinsey and Brian Baumgartner, it’s obvious they’re much more than co-workers — they're practically family. They’ve been friends for 14 years now — or, as Kinsey puts it, “since day one of The Office" — so it's not unusual for these two to finish each other’s sentences or frequently pause to crack up over shared memories. After so many years in the accountant's corner at Dunder Mifflin, they created a bond that rival's that between Angela and her cats.

“We were fast friends over in our corner,” Kinsey, who played Angela, tells Bustle.

Baumgartner, who played fellow accountant Kevin, nods. “We spent a lot of time together. And thankfully got along," he says.

More like this
On 'The Handmaid’s Tale,' Christine Ko Fights Back
By Gretchen Smail
The Best 'Grey's Anatomy' Intern Moments, From MAGIC to Glasses
By Grace Wehniainen
24 Years Ago, 'Friends' Dropped Its Most Underrated Ross & Rachel Episode
By Grace Wehniainen
Netflix Reveals First Look At Wednesday In The 'Addams Family' Spinoff Series
By Bustle Editors
Get Even More From Bustle — Sign Up For The Newsletter