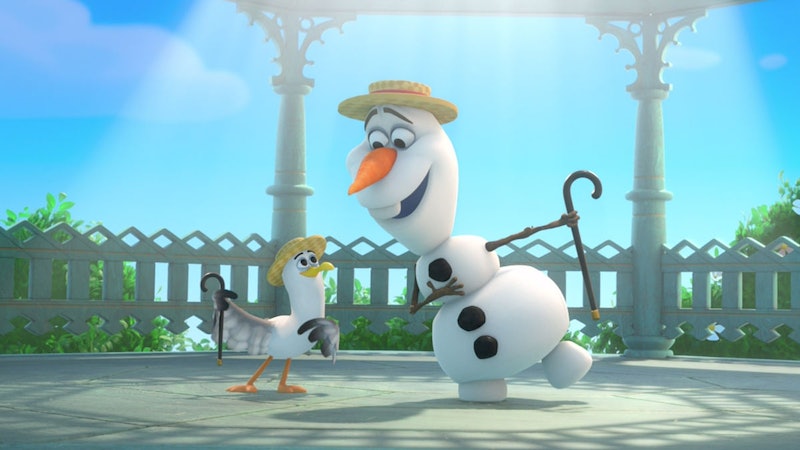 Undoubtably one of the most successful animated films of all time, Frozen became an instant Disney classic when it hit theaters in 2013, offering a story of sentimental sisterhood and silly snowmen alike. And while the film has its fair share of memorable moments and songs, there are some elements that will never, ever, ever make it into the Frozen films or their various short film spinoffs. I sat down with the filmmakers behind the latest silly Frozen offering, Olaf's Frozen Adventure, Stevie Wermers-Skelton and Kevin Deters, who revealed all of the storylines that never made the final cut. And boy, are they out there.

"One of them was Olaf getting stuck in a crevasse and it was based on 127 Hours," Wermers-Skelton says, sitting inside a conference room at Disney's animation headquarters in Los Angeles. "For hours and hours and hours," Deters adds with a laugh.

The idea is based on the 2010 movie starring James Franco, about a mountaineer whose arm gets stuck between a canyon wall and a boulder, and in order to survive he must cut his hand off with a pocket knife. Needless to say, the Disney version would have a much happier outcome than the based-on-a-true-story movie. Because Olaf is essentially made of three giant snowballs, the filmmakers had a much sillier solution in mind for their cartoon protagonist.

"We thought that because he can come apart, maybe his head is stuck under there but maybe he can push his butt out and his butt actually goes and calls for help by itself," Wermers-Skelton says.

By this point, both filmmakers are giggling at the idea, but this wasn't their only outlandish plot for the guileless Olaf.

"We had Olaf puts on a variety show. We had Olaf has an evil twin named Loaf," Deters says. Wermers-Skelton adds: "[Loaf] has the personality of Larry David. He's cynical and bitter and the complete opposite of Olaf."

Another proposed storyline involves Olaf befriending a marshmallow. "I did a drawing of the two of them... the huge size disparity... just going out and doing something together. The odd couple. That would be fun," Wermers-Skelton muses.

Though these ideas were too eccentric to make it into the film's final frames, Deters assured that these silly concepts are, to a large degree, "[just] things you do for yourself because they're fun."

And when it comes to crafting storylines, the filmmakers avoid listening to fans for input. While some filmmakers rely on Twitter, reddit, or fan blogs to discover what their fans are hoping to see on screen, for these filmmakers, doing such research would be "a slippery slope."

Deters explains: "I appreciate that there's a massive fan base out there, but... ultimately, we want to tell a story that's going to make us laugh and cry. What is the sincere story that we can tell rather than trying to chase the fan base? We have to rely on our abilities as storytellers and filmmakers and trust that people will follow where you take the characters. That's the hope anyway."

Olaf's Frozen Adventure hits theaters November 22, and two years later, in November of 2019, Frozen will make its triumphant return with its sequel to the original, Frozen 2. Though very little is known of the plot as of now, Wermers-Skelton and Deters assure that fans will have something to look forward to.

"I know a bit about what's going on in the sequel. We can't talk about it obviously, but there's some cool stuff which will involve the characters in a fun way," says Deters.

Perhaps Olaf will finally get stuck in that crevasse, or maybe Anna and Elsa will celebrate sisterhood with some chart-topping hits. Somehow one of these options seems a bit more likely.

More like this
Rupert Grint Just Shared A *Major* Update About Ron Weasley’s Future
By El Hunt
Anne Hathaway Shared A "Thrilling" 'Princess Diaries 3' Update
By Darshita Goyal
Kukulkan From 'Wakanda Forever' Has A Surprising Connection To Marvel History
By Grace Wehniainen
Twitter Is Overjoyed By Angela Bassett’s Record-Making Oscar Nomination
By Maxine Harrison
Get Even More From Bustle — Sign Up For The Newsletter
From hair trends to relationship advice, our daily newsletter has everything you need to sound like a person who’s on TikTok, even if you aren’t.