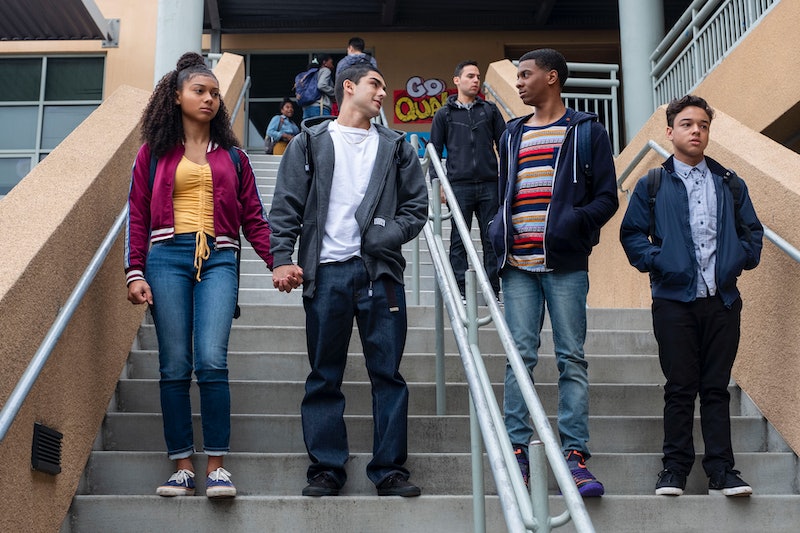 This article contains spoilers for On My Block Season 2. Jamal, Caesar, Monse, and Rudy might have survived being kidnapped, but now that the hoods are off, the four of them are facing down even more danger. Nearly a year after Season 2 left off with a massive cliffhanger, Netflix released the first teaser for Season 3 of On My Block on Tuesday, Feb. 18, along with the long-awaited premiere date of the new episodes: March 11, 2020. The teaser trailer didn't offer up very much information about why the four kids were captured by mysterious villains during the final moments of Season 2, but there are a few clues about who kidnapped the characters from On My Block.

Opening with a shot of a butler wiping down a sharp kitchen knife with a white-gloved hand, the teaser shows off the kidnappers' luxurious home, filled with taxidermied animals, armed guards and a luxurious pool. After the butler carries the knife out to the pool on a silver platter, a woman picks it up, before clapping her hands, signaling the guards to take the black hoods off of her captives' heads. The reveal? Jamal (Brett Gray), Caesar (Diego Tinoco), Monse (Sierra Capri) and Rudy (Jason Genao), who are alive — and completely terrified.

Just like Season 2 — which picked up in the immediate aftermath of Olivia (Ronni Hawk) and Rudy being shot at her quinceañera — the new episodes of On My Block will kick off with the aftermath of the group's mysterious kidnapping, and the terrifying situation they have found themselves involved in. "Basically ... it’s setting us up for our Season 3 drive," creator Lauren Iungerich told Entertainment Weekly of the kidnapping in March of 2019. While she noted that the abduction will "make sense" when it's revealed, the mastermind behind the whole ordeal is "not what you'd expect," adding, "I think that’s the fun of the show."

While the clip might not give away too much information about the people behind the kidnapping, the tone of the teaser does highlight the balance between comedy and drama that On My Block does so well. "What makes the show really hard to write and break in terms of story is taking us inside to something that is really heavy but still finding the humor in it," Iungerich explained. Sure, the group has been kidnapped and their lives are in danger, but there's something inherently absurd about a butler presenting someone a knife on a silver platter — not to mention Gray's pitch-perfect physical comedy. "It's a weird tone," she told EW in 2019, before adding that, "we have to bring the fun back amid these really heavy things."

Fans can see exactly how On My Block manages to do just that — and finally discover who kidnapped Jamal, Caesar, Rudy and Monse — when Season 3 arrives on Netflix on March 11.

More like this
Nicola Coughlan Shared A Lady Whistledown Excerpt From ‘Bridgerton’ Season 3
By Grace Wehniainen, Alyssa Lapid and Sam Ramsden
Netflix Reveals First Look At Wednesday In The 'Addams Family' Spinoff Series
By Bustle Editors
The 'Andor' Timeline, Explained
By Gretchen Smail
Alicent's Green Dress In 'House Of The Dragon' May Be An Act Of War
By Kadin Burnett
Get Even More From Bustle — Sign Up For The Newsletter