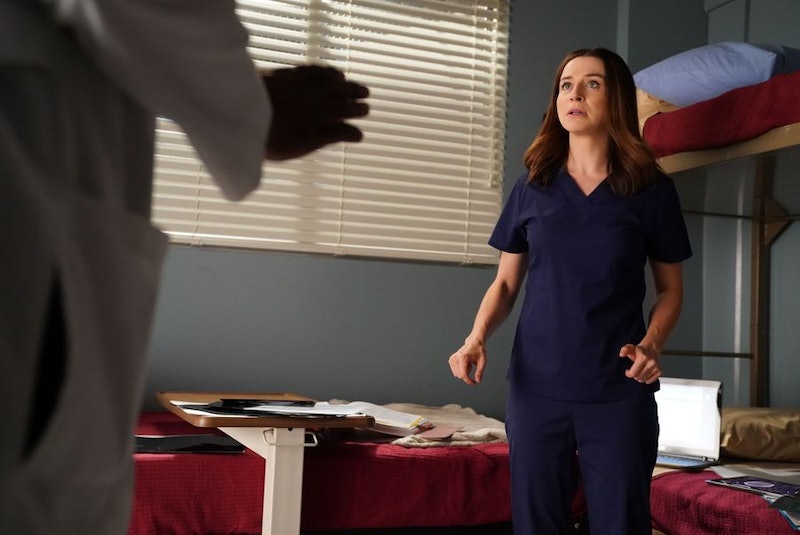 Another day, another drama on Grey’s Anatomy. As if Meredith and the rest of the gang at Grey Sloan haven’t suffered enough, one of their own is sick. Amelia Shepherd has a brain tumor. Haven’t we already done this once with Izzie? Look how that went! She went up in an elevator with George and never came back down! This time, though, the brain tumor is different — there’s one big clue that Amelia won’t die on Grey’s Anatomy.

That clue’s name is Owen Hunt. Owen and Amelia are both damaged people, brought together because they can withstand more hurt than anyone else they know. It’s why they work. But Amelia has been acting increasingly erratic within the confines of their relationship (and everything else, too), and Owen has had enough. Amelia disappears for weeks on end (she would make Edwards cover for her) and barely cares that Owen’s sister, Megan, is actually alive after a decade of being presumed dead. Those aren’t the actions of a person who has it all together. Amelia has a history of trauma (murdered dad, dead brother, dead fiancé, dead baby) and a history of drug abuse, but she’s clean. She’s trying to get over all the bad things that happened to her, but it’s easy to use all of those things as excuses as to why she’s been acting weird. But, that's not why. She has a brain tumor.

Right now, Owen and Amelia aren’t on the best of terms, and that’s why Amelia is definitely going to live. Grey’s Anatomy executive producer Krista Vernoff told TVLine and said that Amelia’s tumor has more to do with marriage than anything else. She said:

"You can look forward to the [story delving into the] complexity of what it is to have a marriage in crisis and then find out there’s this illness, and then potentially know that the illness caused the crisis. Does that allow you to come back from the crisis?"

That doesn’t exactly sound like a death certificate for a much-beloved character. And look how cozy Owen and Amelia are while filming the 300th episode of Grey’s Anatomy in September 2017.

That’s a happy couple right there. Or at least happy-ish. As happy as two people like Owen and Amelia can be.

Amelia’s tumor as plot device could go one of two ways — the first is that she tells Owen and he doesn’t care because he’s had enough and then she dies and he’s tortured and forced to explore his future without a wife and how callous he was before she passed. I’m going to take a hard “no” on that one. The second is what will probably happen — Amelia admits she is sick, and Owen steps up to the plate, because if a former Army surgeon is anything, it’s good in a crisis. Amelia will be forgiven of her wacky behavior (#tumorproblems), and she and Owen will rebuild their relationship, one tumor-free moment at a time. There also could be the question of, “Does Amelia really love Owen?” She seems to have had that tumor an awfully long time — way before her courtship with Owen — and maybe her love is the tumor talking and not her. Another interesting complication is Megan, because she wants to go home to Iraq and while Owen doesn’t want to lose her, he’s going to have to care for his sick wife. Brain tumor wife trumps abdomen surgery sister (at least in this case).

Amelia isn’t going to die tragically because, at this point in the series, no one could handle it. I say this a lot, but these people have been through enough! Let someone be happy for once. So fear not, Grey’s Anatomy fans — Amelia Shepherd is (probably) here to stay, brain tumor or not.

More like this
'Grey's Anatomy's New Intern Got Advice From Dr. Bailey Herself
By Grace Wehniainen
‘SNL’ Finally Spoofed Nicole Kidman’s Weirdly Beloved AMC Ad & Nailed It
By Stephanie Topacio Long
Rhaenyra's Sons May Not Last Much Longer On 'House Of The Dragon'
By Grace Wehniainen
Laenor’s Fate On House of the Dragon Differs from The Book In One Crucial Way
By Kadin Burnett
Get Even More From Bustle — Sign Up For The Newsletter