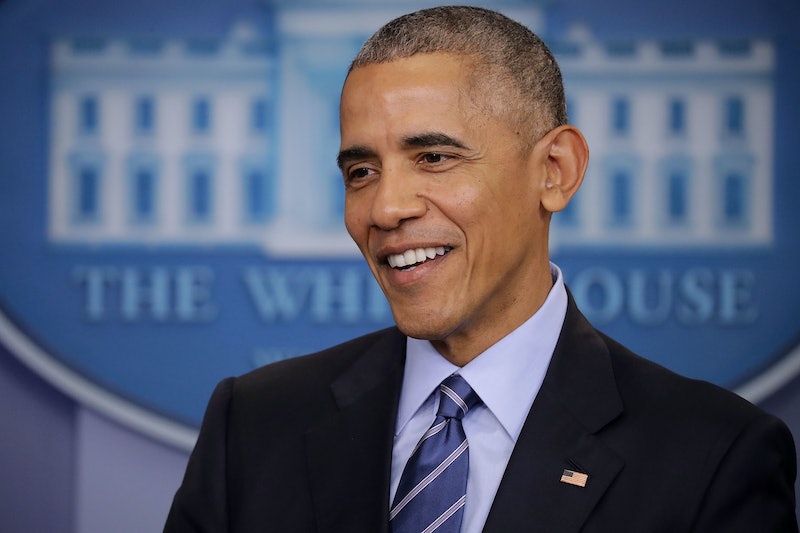 As President Obama's second term comes to an end, it's appropriate to reflect on his last eight years of public service. When he moves out of the White House in January 2017, he'll leave behind a legacy that many Americans will remember as optimistic and inclusive. That's a mark he has left in many of his former positions, as evidenced by one particular moment in young Obama's life that proved he would become quite the memorable leader.

You probably already know that Obama was born in Hawaii and graduated from Columbia University with a bachelor's degree. But it was during his further education in law school at Harvard where Obama seems to have first solidified his place in history. In 1990, Obama was elected president of the Harvard Law Review. He was the first black man to hold the position.

Many of Obama's goals from his time on the law review may sound familiar. "I personally am interested in pushing a strong minority perspective," he said at the time, according to the New York Times. "I'm fairly opinionated about this." He wanted to turn the review into a "forum for debate" by bringing in new writers and new perspectives. The future POTUS had already spent some time as a community organizer for low-income residents of Chicago, but his powerful career in public service and advocacy was only just beginning.

It wasn't just within the law review that Obama's reputation was flourishing during his time at Harvard. Looking back on Obama's legacy at Harvard, Professor Laurence Tribe told PBS' Frontline, "The better he did at Harvard Law School and the more he impressed people, the more obvious it became that he could have had anything. But it was clear that he wanted to make a difference to people, to communities."

Obama's legacy in both his school and public service has remained historic. Along the way, he has used those positions of power to advocate for marginalized populations, from the low-income residents on the south side of Chicago to the millions of young, diverse voters he mobilized in each of his presidential elections. He'll soon move on to a new phase of his career, but the legacy will likely be no different.