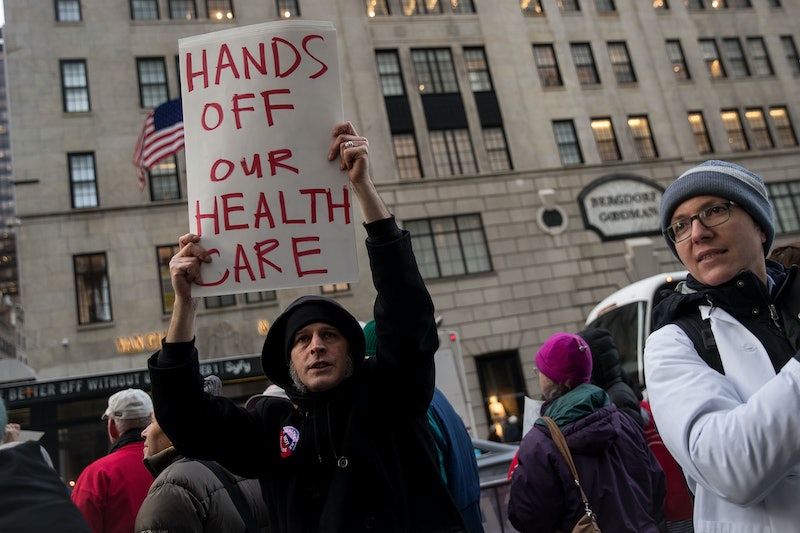 There is no shortage of question marks looming over Donald Trump's nascent presidency, but one of the biggest — one that could impact millions of Americans — is the future of the Affordable Care Act. Trump has had his sights set on dismantling one of the hallmarks of Barack Obama's presidency since the early stages of his campaign. His actions during his first week in the Oval Office have left a lot of people worried about what could happen to their coverage. But there's another group, the people who aren't currently insured, who are even more confused about what to do next, particularly with the Jan. 31 Affordable Care Act enrollment deadline looming. Here's the one thing you should do if you don't have health insurance right now.

On his first day in office, Trump signed an executive order instructing agencies "to waive, defer, grant exemptions from, or delay the implementation of" any provision of the Affordable Care Act that poses a financial burden, according to The Hill. If that went over your head, I don't blame you. The order was both broad and non-specific, which has left health insurance providers and patients nervous and confused.

But as The Hill detailed in its report, health plans anticipated the order and called it a "small step" that would likely only affect the individual mandate portion of the Affordable Care Act, which means that people would no longer be penalized for remaining uninsured. So, at the very least, if you're uninsured and plan on staying that way, at least you probably won't get a fine! Silver lining?

In all seriousness, if you're on the market for health insurance and you're worried about the possible effects of the Trump administration, the best thing for you to do right now is buy into the marketplace anyway. Yes, really. Policy experts who spoke to Consumer Reports believe that there is little that could be done to strip away insurance from people who are already enrolled — for this year, at least. So if you're locked in for 2017, it's unlikely that your coverage would be affected by any sort of policy change until 2018. Then, as Consumer Reports put it, "all bets are off."

In other words, get it while you can. It seems like a grim way to approach healthcare, but there are a lot of preventative measures that you could take with the year that you are all but guaranteed insurance. That gives you a year to get an IUD, which can serve as birth control for three to ten years depending on the type, for free. IUDs, which are currently completely covered by Obamacare, can cost uninsured women thousands of dollars. And that's just one example.

Hopefully, Republicans and the president will follow through on promises to find a suitable replacement for Obamacare. As Consumer Reports noted, there have already been some proposals to replace the Affordable Care Act, and for the sake of the millions of Americans who would left without insurance if the current system is dismantled, I hope they can find an alternative. Until then, though, sign up for Obamacare and rest easy that you'll be covered — for now.