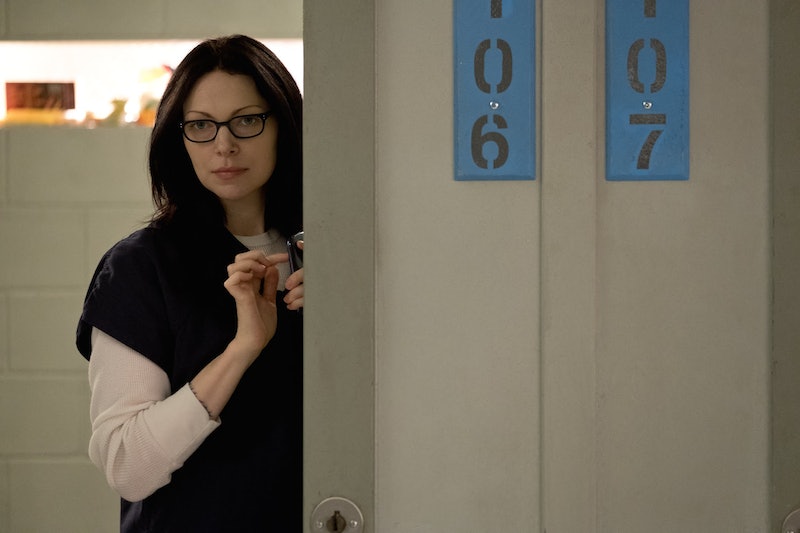 The first teaser for Season 7 sees the cast, including Taylor Schilling, Danielle Brooks, Laura Prepon, and Dascha Polanco, sings the show’s theme song, Regina Spektor’s “You’ve Got Time," as they traverse across the set one last time, ending with Schilling and Prepon in a loving embrace. The tears are starting already.

Last season, Piper (Schilling) was finally released from Litchfield Penitentiary after marrying Alex (Prepon) in a very sweet wedding. Blanca (Laura Gómez) was supposed to be freed along with her, but instead, she was transferred to an ICE facility. And Taystee (Brooks) is being forced to stay at Litchfield forever after she was found (unrightfully) guilty for murdering Piscatella (Brad William Henke) and sentenced to life in prison. Can Twitter start a campaign called #JusticeForTaychee?

In the upcoming final season, “the ladies of Litchfield come to terms with the fact that prison has changed them forever,” as stated in Netflix’s official synopsis of Season 7, reported by Entertainment Weekly. “Piper struggles with life on the outside, while life in Max, as corrupt and unjust as ever, goes on without her. Taystee’s friendship with Cindy still hangs in the balance as her life sentence looms, Gloria and her kitchen staff are confronted by the hard truth of Polycon’s newest profit stream, while others chase drugs or dreams and grapple with the reality of their place in this world.”

Not only will we see the new lives of our favorite characters for the final go-around, but the seventh season will also feature an episode helmed by Natasha Lyonne, who portrays Nicky on the show, in the first time a cast member has sat in the director's chair. ”The idea that Jenji [Kohen, the show’s creator] let me direct an episode of her show means everything to me,” she said in an interview with The Hollywood Reporter. “It was very meaningful to get to end that journey that way.”

Lyonne also dished to THR about how Nicky and the other characters truly grow up and reach the emotional peek of their journeys during the final season. “What’s been really wild to explore this year, and feels like a fitting way to get to play Nicky in the end, is that she’s really grown up. The incredible thing about getting to make a show for seven years is that the journeys are wired into the fabric, so we embody them with the weight and experience of that.”

This episode is just one of the many reasons that the final season of Orange is the New Black will be memorable and special, to both the cast, and the fans.

More like this
The ‘You’ Season 4 First Look Shows Joe’s New Identity And Potential Victims
By Bustle Editors
The ‘Emily In Paris’ Season 3 Release Date Is Here, Plus The First Footage
By Bustle Staff
Here's When 'The Crown' Season 5 Will Premiere — And What To Expect
By Bustle Editors
'Fate: The Winx Saga’s Cliffhanger All But Begs For A Season 3 Renewal
By Brad Witter
Get Even More From Bustle — Sign Up For The Newsletter