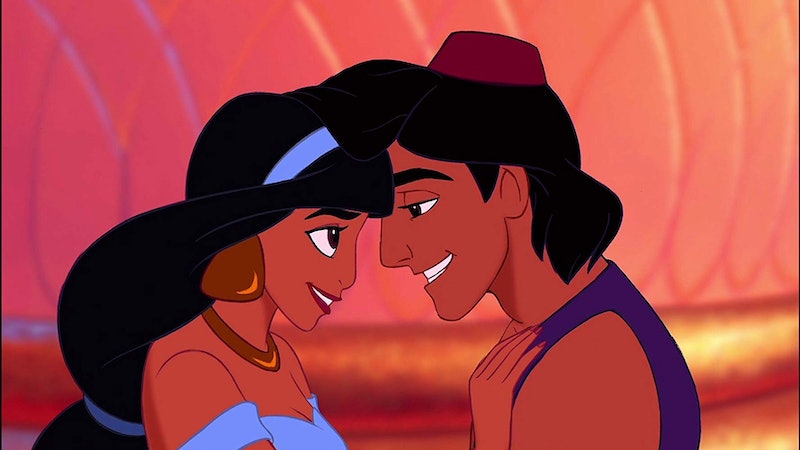 As promising as Disney's new live-action version of Aladdin looks, there's really nothing like the classic animated 1992 original. Whether or not you were a fan of the Genie as voiced by the legendary Robin Williams, or the colorful and imaginative animated musical numbers, the first Aladdin is a nostalgic experience that immediately transports you back to your childhood. So if you'd prefer to watch the original at the comfort of your own home rather than hit theaters for the story's latest iteration, or if you just want a little recap before you see the Guy Ritchie-directed film, out May 24, you need to know where you can stream the original Aladdin.

Sadly, while the original motion picture soundtrack is readily available on multiple platforms like Spotify and YouTube, the movie itself isn't currently available to stream on any of the popular entertainment streaming platforms. It's not on Amazon Prime Video, Netflix, or Hulu. However, you can purchase the Blu-ray or the DVD of the "Diamond Edition" of Aladdin on Amazon — until they're out of stock, that is. For now, the movie is in Disney's Vault, so it's a little hard to find.

Aladdin story is timeless, and shows the best of what Disney has to offer, which is one of the reasons it's been remade. At the center, there's a touching romantic narrative between two non-white characters. Jasmine is a a strong and fierce presence, and Aladdin is charming and clever. Add the comic stylings of Williams and the incredible music, and you have a Disney classic.

That iconic score includes unforgettable tracks like "A Whole New World" and "Friend Like Me" — both of which we will definitely be hearing in the live-action movie. To this day, Jasmine's singing voice, Tony Award-winning actor Lea Salonga, continues to sing "A Whole New World" at concerts and appearances. The 1992 musical animated film was such a hit that it has also since been adapted into a Broadway musical, which has been running for the past five years.

After the original movie, Disney also dropped a sequel in 1994 called The Return of Jafar, wherein the former vizier is freed from his captivity in the lamp by a crook named Abis Mal, and goes out to seek revenge on Aladdin. Two years later, a third movie called Aladdin and the King of Thieves came out, which tells viewers more about Aladdin's past, his family, and the truth about who he is. (If you're willing to make do with the straight-to-video sequels, The Return of Jafar and Aladdin and the King of Thieves can both be purchased on Amazon to stream immediately.) Also, loyal Disney Channel viewers would also know that an Aladdin series ran for three seasons from 1994-1995.

Though there's not really a way to watch the original movie other than buying the actual DVD or looking for your old VHS tape, it's likely that Disney's own upcoming streaming service, Disney+, will have the original Aladdin and all of our other classic Disney favorites when it launches in November. So if you're looking to watch the original movie, and maybe even make a Disney Classics marathon of it, you'll just have to wait until fall.