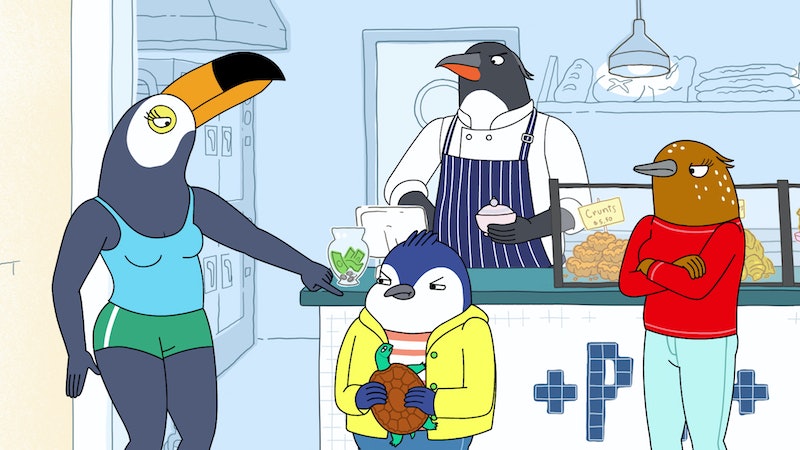 Spoilers ahead for the entire season of Netflix's Tuca & Bertie. When heading into a show created by a Bojack Horseman illustrator, you should expect to feel a lot of feelings. Netflix's new series Tuca & Bertie delivers on that front, particularly in the back half of the season. A particularly hard-hitting storyline comes in the form of Bertie's apprenticeship with Pastry Pete, an older, famous baker she hopes to learn from. At first, it's great to see Bertie tapping into her passion, but things quickly become uncomfortable in a way that's difficult to come to terms with.

Pastry Pete helps her knead dough, standing too close and touching her arms too much. He talks authoritatively — he knows she needs something from him, and he relishes being the one to bestow his wealth of knowledge on her. This all comes to a head when he asks her to stand over his experimental banana roux, pushing her head closer and closer to the steaming pot in order to smell it better. He never asks her out or outright propositions her, but he treats her body and her personal space as his own property to intrude upon as he likes, and doesn't seem to give it a second thought.

It's frustrating to watch Bertie endure this treatment without raising her voice. You want to scream at your television, "Tell him to back off!" but she never does, And what's more, she even develops a crush on Pete, running to touch herself in the bathroom after some of their encounters and waking up to sex dreams about him.

Things become even more tense later in the season, when Dakota, another wide-eyed young woman, comes to town and ends up apprenticing alongside Bertie under Pastry Pete's eye. He pulls the same move on her, banana roux and all, while Bertie watches in disbelief. Despite Dakota's perceived naiveté, the young woman doesn't stand for it and immediately screams at him to stop touching her. Dakota also tells Bertie off for not warning her about their boss when she rightfully starts to realize he'd done the same to her.

Bertie knows she should stand up to Pastry Pete, and that she should have protected Dakota, but it's not that simple. Pastry Pete represents a source of happiness for her, and she's not ready to let it go. She's willing to put up with his inappropriate behavior if that means he helps her become a better baker, which is her main respite from a draining 9-to-5 office job. She's nursing a passion and he's helping. And she's also apparently flattered by the attention.

Toward the end of Tuca & Bertie's first season, we get even more context about Bertie's past with predatory men. She confesses to Tuca that as a child, she gave up her dream of swimming after an older, manipulative lifeguard at summer camp abused her when she was 12 years old.

Throughout the series, there's really no right or wrong answer to what Bertie should or shouldn't do in her situation with Pastry Pete. Tuca & Bertie leaves things murky, uncertain, and tense, as is so often the case when these things unfold in real life. Bertie is obviously starting to move past her trauma and take back her own agency when the season ends, but there's no neat and tidy conclusion, and that makes it all the more real. When you're faced with those kinds of power dynamics and bad behavior, there often aren't easy ways out. Tuca & Bertie embraces that uncertainty and complexity, and Bertie's story is all the more resonant because of it.