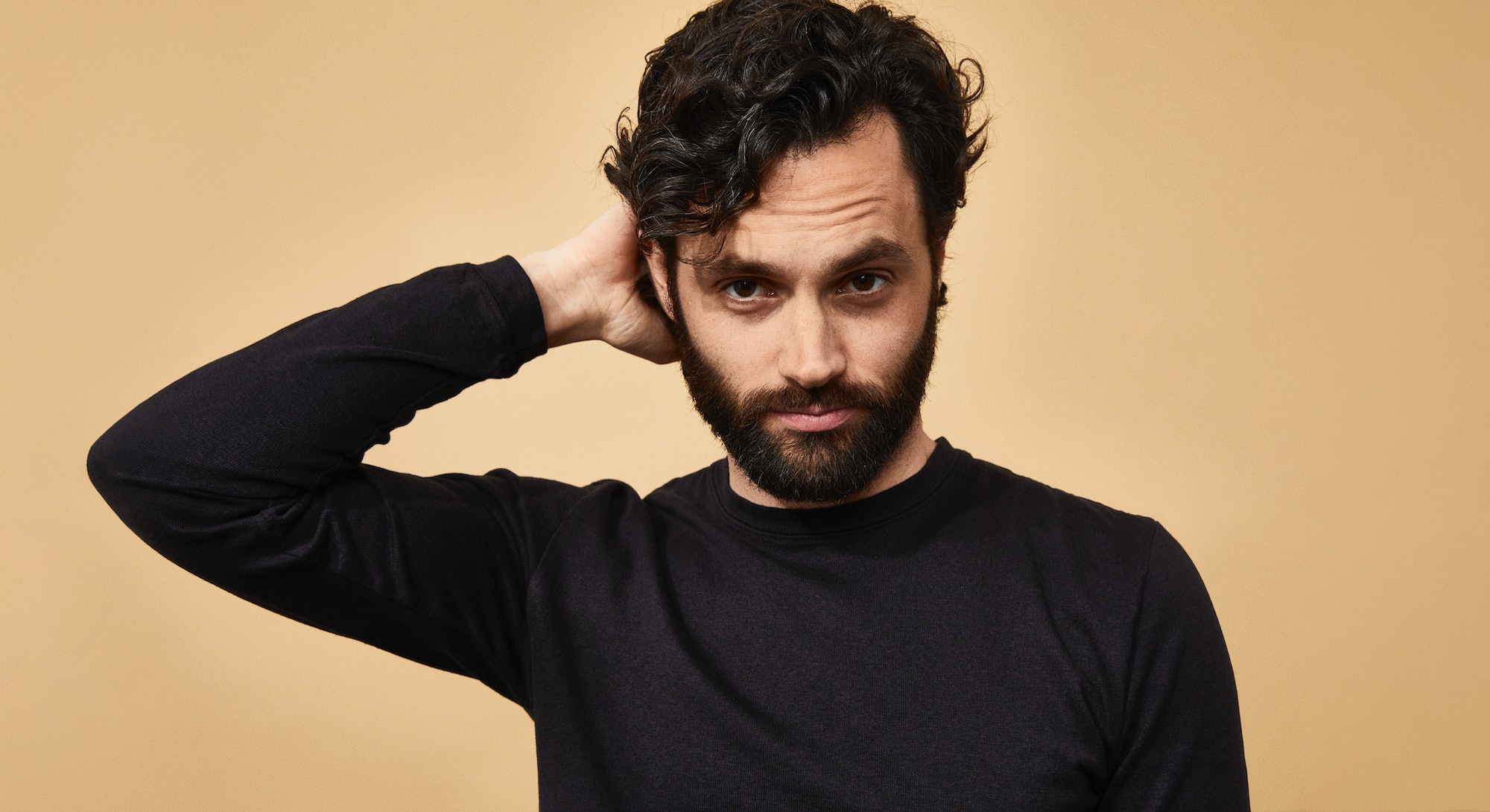 It’s a dry January morning and Penn Badgley is a magnet for fuzz. A groomer on the set of our photoshoot takes a lint roller to his all-black sweatered torso, which seems to embarrass the 33-year-old actor, as if someone has wiped his nose or tied his shoes for him. “I have this in my contract,” he jokes.

Badgley has been uncomfortable with the trappings of fame since 2007, when he begrudgingly rose to prominence as Gossip Girl’s Dan Humphrey. "He was the New York version of the Adam Brody character in The OC," Badgley dismisses. "If you spend enough time with the sort of protagonists we're accustomed to seeing, which is, you know, confident, young, white men… they can [all] become insufferable."

Badgley's latest insufferable protagonist is of the criminal kind. Joe Goldberg, the disarming sociopath at the center of Netflix’s YOU, is in many ways, the apotheosis of the kind of unchecked privilege that preoccupies Badgley. A few hours after the Bustle photoshoot, he makes an appearance on The Late Show with Stephen Colbert, downplaying the praise he’s received for his performance in YOU: “If you put a fully clothed person staring at a woman in her underwear in bed when he’s not supposed to be there, it’s inherently creepy. You don’t have to do anything.” When Colbert insists on a demonstration, Badgley turns to camera, smiles, then darkens his face into a dead-eyed stare. The crowd dutifully applauds him for doing absolutely nothing.

With 18 months of Goldberg-adoration under his belt, that sheepishness has sharpened into a critique of his own privilege. As Badgley once put it, the show acts as a “litmus test to see the mental gymnastics that we're still willing to perform on a cultural level, to love an evil white man.” He rejoined Twitter in September 2018 after a two-year hiatus, and it's where he frequently weighs in on social justice debates, while simultaneously admonishing fans for romanticizing a predator. "Maybe this [is] on us, guys. We made a really likable serial killer," he tweeted to Netflix in January 2019 in response to a breathless fan who argued "you can't be in your right mind with Joe's dreamy smile."

That "dreamy smile" is now hidden under a beard thick enough to conceal the angular jaw and hollowed cheekbones that make him so menacing onscreen, but an intensity remains. “I know everybody's fully capable of understanding these deeper themes,” he says of the responsibility he feels to help sift through the show's heavy subject matter. “[I like to] encourage that part of it.”

“Some of my closest friends ... they're all able to interact with [these issues] in a different way from me. But I'm very white. And I’m famous.”

In the years after Gossip Girl ended, Badgley went through a breakup, poured himself into music, got married, and became a stepdad. During our conversation, he is prone to long pauses and meandering tangents, trying out his words as if putting together a jigsaw puzzle. The young, brash 20-something who once told Details in 2008 that “one of the things that's been my bread and butter with all these television shows I've done is that I don't give a sh*t,” has disappeared, but his political activism has remained.

While still on Gossip Girl, he was photographed hoisting up a sign that read “Bring Back the Glass-Steagall Act” at Occupy Wall Street in New York City, and he wore a “We Are the 99%” T-shirt on set while Michael Bloomberg, New York City’s then-mayor, presented the Gossip Girl cast with a proclamation from the city. “When I'm invited into those kinds of places by people who really know what they're doing and think it's warranted, I'm happy to be there,” he says. Showing up uninvited, he adds, is “where I think people with privilege have been well-intentioned but mistaken.”

While he regularly speaks out about global injustices, and has worked with the Tahirih Justice Center helping to reunite a Guatemalan immigrant with her separated, U.S.-born daughter, he's cognizant that his understanding of them may be limited. “Some of my closest friends who are, say, African American or mixed or, you know, Iranian or Turkish or Russian… they're all able to interact with [these issues] in a different way from me,” he says. “But I'm very white. And I’m famous.”

Badgley attributes his political and spiritual inclinations in part to his father, Duff Badgley, a former Green Party candidate who once described himself as “more radical politically than Penn will ever be.” During Badgley’s teen years, he says, “my father was probably one of the only people in my life really striving to live a spiritual life and recognize the ways that we're all indoctrinated into a culture that's to some degree arbitrary.” He also credits R&B and hip-hop — in particular D’Angelo, whom Badgley once called the only person he’s truly idolized — with giving him a deeper connection to spirituality.

“There were points where, as a young white kid, the only contact I had with God was through black music,” he adds, before diverting into a circuitous tangent about the moral ambiguity of loving music that is rooted in persecution and broadly appropriated. “We call it soul music, which is kind of offensive.”

“We all want to change the world. How can you do that without politics?”

Badgley also became Bahá'í, a religion founded in Iran in the 19th century that advocates for the equality of all people and faiths. Bahá'ís are encouraged to refrain from partisan politics, something that’s difficult to practice in such a divisive climate — especially on Twitter.

“We all want to change the world. How can you do that without politics?” he asks. “It seems that political identity has somehow superseded the human identity. It seems like once you've decided what you are, then you're beholden to that faction, as opposed to being beholden to being human.”

A few moments later Badgley’s publicist interjects to let me know he has to leave. Soon, though, he's back, leaning over the couch where I’m still lingering to direct me to his Twitter feed, where he’d written about the tragic death of Danye Jones — the son of an instrumental Black Lives Matter activist — for more context. “I think it was 2017,” he says. “No, 2018.” He wants to make sure he gets it right.

Grooming by Jillian Halouska using OGX at The Wall Group