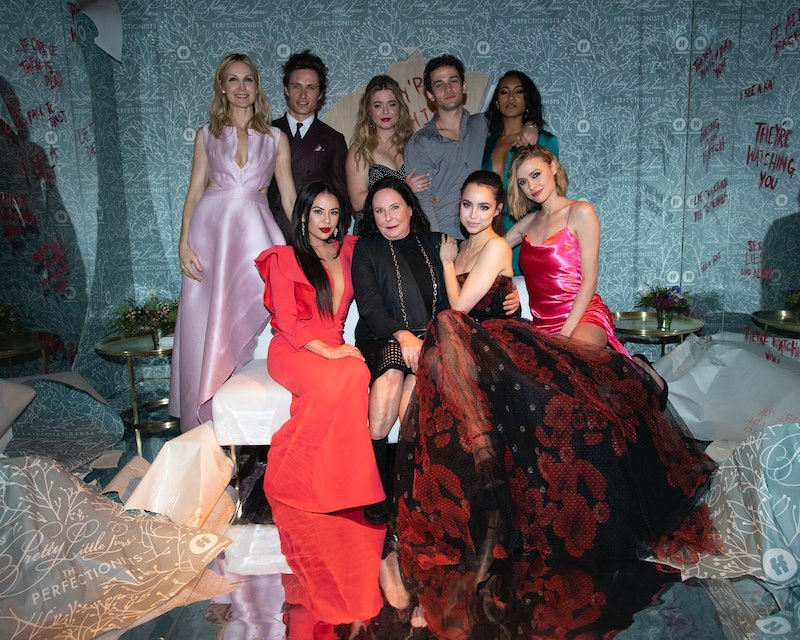 Spoilers ahead for the Season 1 finale of Pretty Little Liars: The Perfectionists. As PLL: The Perfectionists comes to a season close, there are more unanswered questions than ever. Bustle talked to series creator I. Marlene King about that jaw-dropping Perfectionists finale, as well as what fans can look forward to in Season 2, if Freeform renews the series. And she really spilled all of the beans.

The finale saw plenty of surprises, both in terms of the mystery surrounding Nolan's death and the Perfectionists' personal lives. There are new characters, a new villain, and plenty of new drama — Jeremy's being shot was just the beginning.

During a phone interview with Bustle, King shared some details about which characters will be back next season, as well as some of her favorite details about the show's relationships. For one thing, fans disappointed that their favorite on-screen couples are no longer together — yes, we're talking about Alison and Emily, and Mason and Mona — shouldn't lose all hope. There's still a chance that both of those couples could get back together. And in Mona and Mason's case, it could be sooner rather than later.

Here are some of the juiciest tidbits the Perfectionists creator revealed.

"They have such great chemistry together! I ship them," King says of Mona and Mason. The quick-thinking brainiacs bonded over their love of chess, but their romance was short-lived. Claire fired Mona over the relationship, only to re-hire her when Mona threatened to blackmail her over Claire's own relationship with Mason. But as fans have noted, Mason and Mona (unlike PLL's Ezra and Aria) are both consenting adults, and Mona isn't Mason's teacher — so there's no ethical reason they can't date.

The Pig Mask Will Be Addressed

I asked King if Dana Booker was behind the pig mask, or if the Professor is stalking the perfectionists IRL. And if you're still confused about that scene, don't worry — there will be answers about who was under the mask soon. "The answer to that is gonna come pretty quickly in Season 2," King says.

Luke Is Probably Sticking Around For Season 2

During the finale, fans met Luke, who bullied Dylan in high school for being gay. It turns out, Luke was acting out because he was afraid to come out himself. While characters like Dylan and Nolan are comfortable in their own sexuality, Luke wasn't always that way, and King wanted to show that experience, too.

"I really wanted to bring a character like that into the show. I'm from a small town, and it took me a long, long time to come out to myself, as well as my friends and family," King tells Bustle. "We live in a bubble in Los Angeles and New York and bigger cities. But people in small towns are still really faced with the stigma of trying to be true to who they are. So I wanted to represent somebody like that in a positive way on the show."

Luke did seem pretty sorry for how he treated Dylan, and it will be interesting to see how their relationship develops in Season 2.

Alison & Emily Could Be Together In The Future

It's a big "if," but Alison's future isn't totally set in stone. For now, though, Alison is on her own journey, which meant having to leave her Rosewood life behind.

"I want her character to have a chance to go on a long — and probably bumpy, but rewarding — journey," King says of Alison. "And that doesn't mean she won't ultimately end up with Emily. That just means, for right now, she needs to have the freedom to live her life, in every aspect."

Literally Everyone Is A Suspect

It's hard to see why the Professor would need recordings of Mona and Alison sharing their fears if they were in on the plan. After all, they recorded them alone, not in front of anyone else. But anything is possible at this point.

Ray Hogadorn Could Return, Too

When I mentioned the two empty chairs at the Crimson Society meeting, King said they weren't necessarily intended for students. "I think the list is open to university students, faculty, teachers, and staff," King says. And staff could include Perfectionists janitor Ray Hogadorn, whose name showed up alongside Caitlin's and Alison's on Mona's computer program.

Another possibility for those two empty chairs is Zoe, who was there when the photo of Dylan and Nolan showed up in Ava's presentation. "We'll definitely see some more of Zoe," King says.

There Could Be More Nolan Flashbacks

Fans have gotten to see more of Nolan and Ava's relationship, but there's still a lot missing from his backstory. If the pilot is any indication, Claire wasn't the most caring mom towards her son, and more flashbacks about the Hotchkiss family could fill in some of those gaps.

"That's definitely a strong plan for Season 2," King says of the flashbacks. "I think there's so much we don't know about his relationships with our perfectionists, as well as maybe some people we haven't met in our world yet."

If Freeform does renew The Perfectionists for another season, there's plenty of material for the writers to work with. Whoever the Professor is, the creepy possibilities are endless at this point.

More like this
Nicola Coughlan Shared A Lady Whistledown Excerpt From ‘Bridgerton’ Season 3
By Grace Wehniainen, Alyssa Lapid and Sam Ramsden
'Elite' Season 6 Is Arriving Sooner Than You Think
By Gretchen Smail and Grace Wehniainen
What’s New On Netflix: Ana De Armas’ 'Blonde' & A Nick Kroll Special
By Arya Roshanian
The 'Reasonable Doubt' Cast Includes A 'Save The Last Dance' Reunion
By Grace Wehniainen
Get Even More From Bustle — Sign Up For The Newsletter