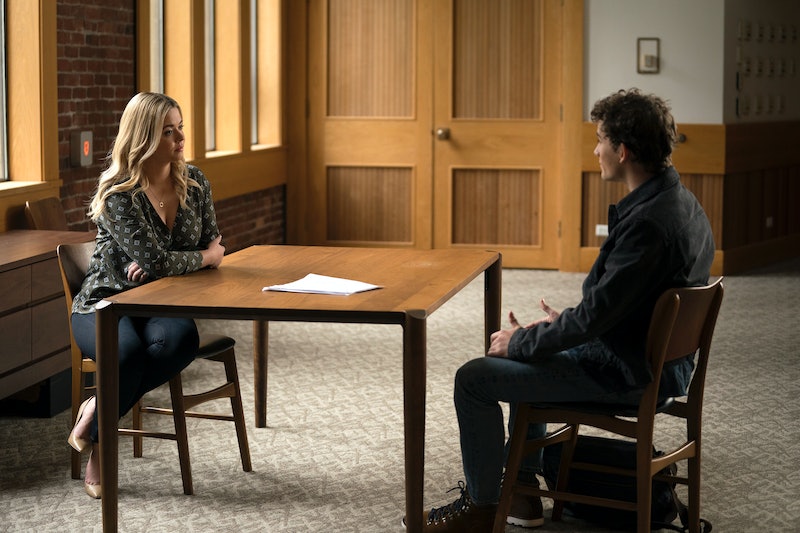 Dead Week might have doomed Dylan's school career on PLL: The Perfectionists, because he ended up cheating to get all his work done in time. The cellist tried to get an extension on his music project, in part because it's been too painful for him to physically play, but no dice. So, he chose an old cello sample from a 1918 composition and turned it in as his own. The only problem is that whoever is torturing the Perfectionists knows his secret, and Eli Brown, who plays Dylan, says in an interview with Bustle that "it's not looking good" for him.

Assuming Dana is the "A" in Beacon Heights, Brown says it's "really unfair" to the Perfectionists that she's able to discover all of their secrets so quickly. Dylan had barely even turned in the plagiarized assignment before Dana was playing it over the loudspeakers in the student union and giving Dylan a knowing look. The glare said it all, I know what you did, and I'll use it to destroy you. "She knows way too much ... it’s killing all of us and it’s not cool," Brown says of Dana. "I don’t know where she gets this information."

Brown adds that he thinks Dana chose to play the song rather than go to the school with what she knew because she's trying to use it against him to get him to crack. "I think that she’s trying to use it as leverage to get one of us to rat," Brown said.

Dana (or whoever is torturing them, it could potentially also be someone else) believes that one or more of the Perfectionists had something to do with Nolan's death, and she'll pretty much stop at nothing to get them to admit that. "She’s wicked smart and sharp as a razor and very menacing," Brown says of Dana. "I think she means business, so she scares me."

She may be keeping Dylan's secret for now in order to use it against him, but it sounds like the school does find out at some point. "[Dylan] definitely goes through the wringer [in the next few episodes]," Brown says. "He has to speak to various ethics committees and professors, et cetera. It’s not looking good."

Most colleges take cheating very seriously, and BHU is likely to do the same. At the end of the episode, Dylan feared he could get kicked out, and he very well may. But even though his academic career is in jeopardy, Dylan may have found someone who will stick with him through it: Andrew. The couple reunited during the May 1 episode, after Andrew forgave Dylan for hooking up with Nolan and not telling him about it.

"It's a very sweet scene," Brown says, reflecting on the pair's make up moment. "It's very beautiful and heartwarming and then they’re back at square one. They’re good, they’re happy again."

As part of his agreement to return home, Andrew made Dylan promise that "from now on we're totally honest with each other." Dylan agreed, "No more secrets." But he didn't tell Andrew that he cheated again — only this time on his homework.

Brown says he doesn't think Andrew would be happy if he found out Dylan was keeping another secret, but the actor doesn't think it will stand in the way of their relationship. "It's not like the secret is that [Dylan] cheated on him again, you know?" Brown says. "I think that, no matter what, they can figure their stuff out."

BHU doesn't go easy on its students, and Brown says things are about to get even more intense. So it's a good thing that Brown thinks Andrew will stick around. Dylan's going to need all the support he can get from his friends and loved ones if he's about to take on BHU for cheating and Dana Booker for exposing his secrets.