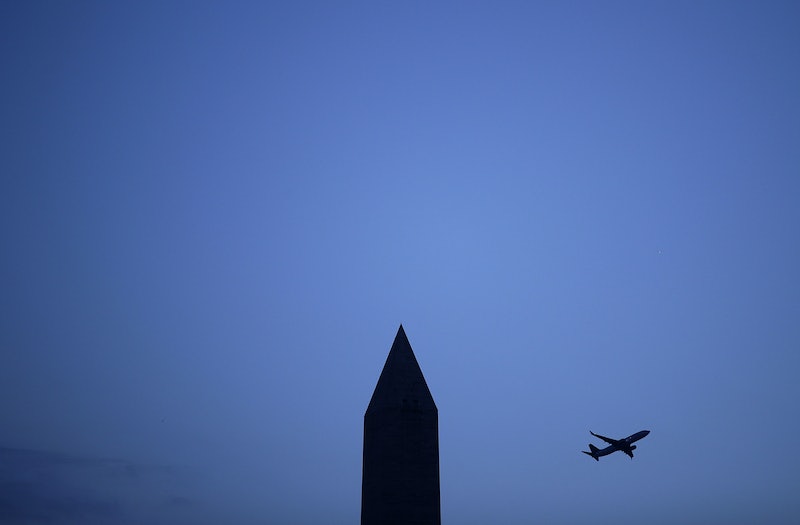 Women from all over the country (and world) are seemingly in transit to the Women's March on Washington in full force. On Twitter, photos of flights to DC for the Women's March are popping up everywhere, and they show large commercial planes full of marchers, many of whom are wearing pink"pussy hats."

Indeed, one airline, Southwest, even changed a Baltimore-bound flight's lighting to pink in honor of the myriad of marchers on board. In another instance, Virgin American went the extra mile to welcome marchers, displaying a sign at the gate of one of its DC-bound flights that said "Good Luck on the Women's March."

The Women’s March is expected to draw crowds at least five times greater than Donald Trump’s Inauguration ceremony on Friday. Indeed, media outlets suggested that around 245,000 people are estimated to march in tomorrow’s event. If the packed flights to DC are any indication, these high numbers are probably quite accurate.

Seeing so many women from all over the country traveling together to march in solidarity for women's rights is incredibly inspiring and provides a wonderful foreshadowing of the unity and perseverance that we will see at tomorrow's Women's March on Washington.

Former Clinton staffer Jack Miller shares a compilation of photos of flights headed to Washington completely full of women who are attending the March (and wholeheartedly demonstrating their excitement!)

2. Pussy Hats at the Gate

A flight full of Women's March attendees in Utah gets together for a picture prior to boarding their Washington, DC-bound flight.

3. Activism at All Ages

An adorable baby wearing her very own "pussy hat" heads to Washington, DC.

A Southwest Airlines flight bound for Baltimore changes its cabin lighting to pink in honor of the many Women's March attendees on the plane. The gesture seemingly delighted passengers, who were touched by the move.

5. Flight Attendant Gives a Shout Out to "Nasty Women"

An amazing Spirit Airlines flight attendant warmly welcomed passengers to Baltimore, asking for a "round of applause for all the nasty women on board" and reminding them to "watch out for their fellow sisters."

Ann Friedman live tweeted her flight to DC for the March, which she referred to as an #AllLadyPlane, noting that the entire flight consisted of women, save "one lone dude in 26C." Friedman shared this photo of her fellow "fired up" passengers.

Journalist Connie Schultz shared these photos of her flight to DC, departing from Cincinnati. When asking her fellow passengers who was attending the Women's March on Washington, nearly everyone raised their hands.

8. Excitedly Waiting to Board

Amanda Jackson shared his video from Atlanta's airport; seemingly dozens of March attendees are anxiously awaiting boarding for their flight to DC. They excitedly cheered and raised their hands when asked if they were attending the March.

A flight from Seattle to Washington, DC shows row after row of women donning Pussy Hats, ready to march in Saturday's event.

Overall, these flight pictures provide a very inspirational start to the Women's March weekend. Witnessing so many women taking time out of their lives to travel far distances and come together in solidarity for a greater purpose is exceedingly powerful, and constitutes a great kick-off for what is sure to be a historic event tomorrow.