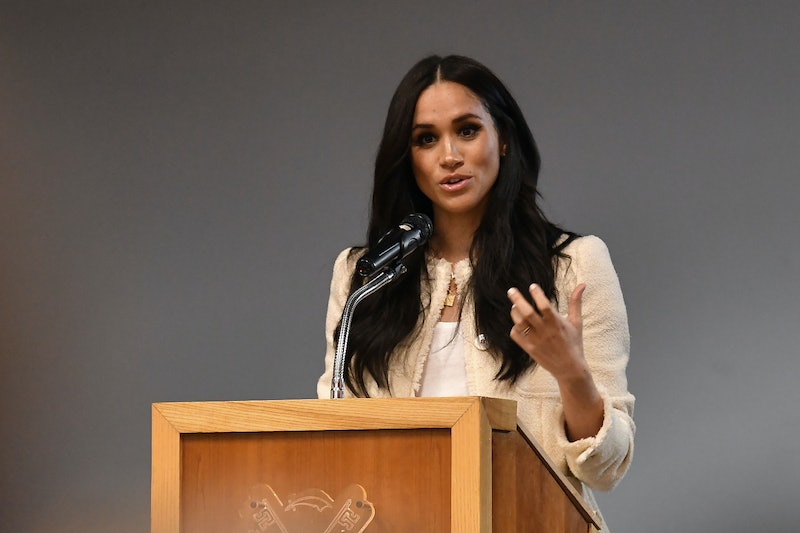 It was expected that Meghan Markle would make some kind of statement for (what is believed to be) her last solo engagement as a royal. But fans could easily have missed the 38-year-old's wholly positive vibes. Because instead of wearing a brazen slogan tee, Meghan chose a good fortune necklace for an International Women's Day event.

Arriving at the Robert Clack Upper School in Dagenham, Essex, on March 7, Meghan looked as chic as ever. Her monochromatic outfit consisted of a simple white top and black trousers with a boucle Me+Em jacket thrown over the top. It was only when giving a female-focused speech to hundreds of students that her jewellery could clearly be seen.

The square-shaped Kismet Charm Necklace is described as a "modern-day talisman" by jewellery brand Edge of Ember. On it, sit two notable symbols of good luck: a four leaf clover and the number seven. Whether Meghan was sending good fortune to all the women across the world or giving herself a little boost as she nears the end of her royal life, we'll never know.

But the gold-plated piece, inspired by Asian vintage coins, can be yours for £125. And if you want to thread the pendant through a chain you have at home, you can buy the charm alone for £75.

Meghan's school choice wasn't random. Dagenham was the place where, in 1968, a group of female Ford workers went on strike for equal pay, reports ITV News. Two years later, the Equal Pay Act was passed. Meghan met some of the original strikers at the school and spent time with students.

"When we thought about what I wanted to do for International Women’s Day this year, for me it was incredibly important to be with the women of our future," she told them. "And that is all of the young women here, as well as the young men who play a very large part in this. Specifically coming to your school made a lot of sense for me because of this social justice and the impact that it’s rooted in.”

One male student, Aker Okoye, left everyone in stitches after volunteering to speak about the importance of International Women's Day. His first sentence? "She really is beautiful, innit." Per the Evening Standard, the 16-year-old has now written to Prince Harry, saying: "I hope you didn’t mind me cuddling your wife."

Whether you're embarking on a new path or just want to radiate good vibes, here's a few alternatives to Meghan's charm:

Gold Luck Amulet Necklace
Missoma
Offering good luck to all those who wear it, this amulet chain is finished with a subtle green zirconia stone.
Estella Bartlett Horseshoe Charm Bracelet
John Lewis
Another traditional sign of luck, the horseshoe, features on this silver-hued charm bracelet.
Daisy London Good Karma Fatima Ring
The Jewel Hut
Protect yourself with the ancient Hamsa hand, thanks to this sterling silver ring.
Lucky Goddess Star Necklace
Swarovski
This heavily discounted piece boasts several lucky talismans. The arrow symbolises determination while the stars reference inspiration.
Lucky Coin Charm Pendant
Thomas Sabo
If you can't decide which lucky symbol to adorn yourself in, this charm has one for every day of the week. Attach it to a necklace, bracelet, or whatever takes your fancy.
More like this
Twitter Can’t Get Enough Of Lewis Capaldi Creating Fashion Looks For ASOS
By El Hunt
Harry Styles Stans Are In Their Feelings Over Alessandro Michele Leaving Gucci
By El Hunt
Florence Pugh Brought The Boudoir To The Red Carpet In A Sheer Cape Dress
By El Hunt
The Special Meaning Behind Kate Middleton’s Royal Banquet Bracelet
By Sam Ramsden
Get The Very Best Of Bustle/UK