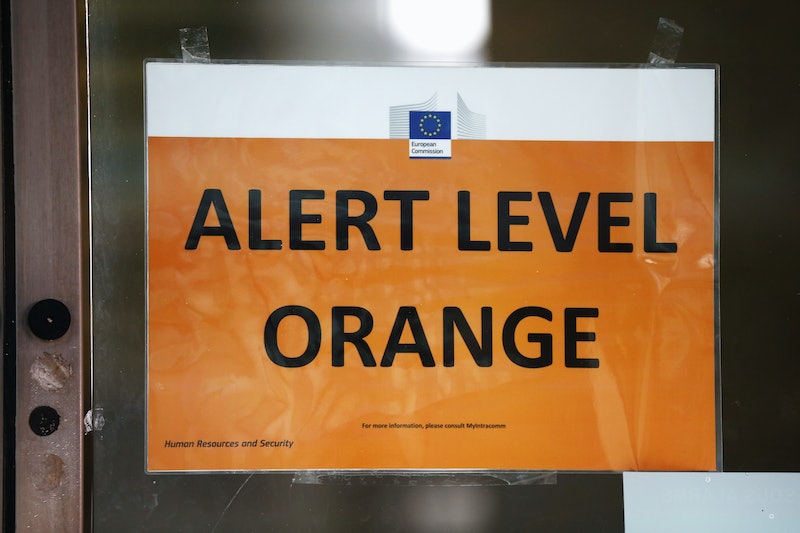 As recently as last week, the nation was bracing for something that it had never seen before: the test of a new system through with the president could have sent emergency text messages to essentially any American with a phone connection. After an outcry, though, the presidential alert text date was delayed to early October — although the Federal Emergency Management Agency's (FEMA) official reason for the delay was the "ongoing response efforts to Hurricane Florence."

The presidential alert system test was supposed to take place on Sept. 20, but FEMA's ongoing work on the natural disaster that Hurricane Florence has created in the the Carolinas and Virginia has pushed back until Oct. 3. However, NBC News noted that the announcement of the presidential alert system was met with much public disapproval. While NBC News initially reported that experts doubted that President Donald Trump could misuse the Emergency Alert System (EAS), as it's called, for political purposes, many people expressed their belief that it was unnecessary or even dangerous in the hands of the current president.

"I’m thinking about this Presidential Emergency Alert system and all I can come up with is why is this a thing that’s been built?" data scientist Emily Gorcenski wrote on Twitter. "What problem does this solve? Like what is gained by the president—any president—having the ability to put a message directly into my nightmare brick."

The experts that NBC News spoke to did not see a danger of the president misusing the system, and merely emphasized that it could be very useful in the case of an emergency. It would go out to anyone using one of the dozens of cell service providers who signed on with FEMA, NBC wrote, and users would not be able to opt out of it.

"I think it is an outstanding tool in the toolbox. It is a great way to get notification to anybody who has a cellphone," said Nick Crossley, the U.S. president of the International Association of Emergency Managers, according to NBC News.

Facilitating an alert system between the president and all Americans in the event of a natural disaster or a terrorist threat is within the purview of FEMA, CNN wrote, and the new wireless emergency alert (WEA) system is merely the next step in bringing an outdated emergency alert system into the modern day.

Some have noted, though, that the outcry in response to such an apolitical tool as an emergency alert system is a good illustration of why exactly a polarizing president like Trump is so potentially dangerous for the country.

"A great example of why a bad president is so bad for the country," said security researcher Stephen Cobb on Twitter. "This POTUS is so bad that folks are prepared to forgo the potential benefits of a national alert system - which already exists on radio and TV - because it is hard to believe Trump will not abuse it."

Trump, for his part, has not yet commented on the WEA or how he would use it. While many social media users expressed fears that he could use the new system as merely an extension of his personal Twitter, the NBC News report emphasized that experts believe there is little chance of the system being used for political purposes.