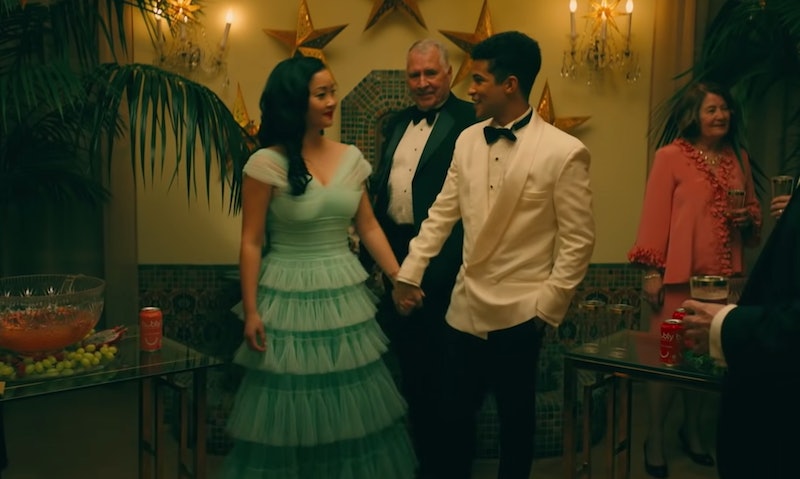 Major spoilers for To All the Boys 2: P.S. I Still Love You follow.

To All the Boys I've Loved Before went through a few minor changes on its way to Netflix — a common occurrence in book-to-film adaptations — and as such, P.S. I Still Love You also has a few revised plot points. One of them being that P.S. I Still Love You's film ending is a bit different from the ending presented in the novel.

The first To All the Boys I've Loved Before film ending borrows heavily from the second book's beginning. Specifically, the film ends with Lara Jean (Lana Condor) and Peter (Noah Centineo) kissing after she confesses her feelings for him on the lacrosse field. But that doesn't actually happen in the first novel at all — it happens at the start of the second book. Whereas the first novel ends with Lara Jean only mentally committing to telling Peter how she really feels.

For the sequel, the major beats of the book remain somewhat the same in the first half of the film. Things are going great for Lara Jean and Peter, now fully in a relationship with each other. And Lara Jean begins volunteering at an elderly home, but not before receiving a surprise in the mail: a letter from her middle school crush John Ambrose (Jordan Fisher). Naturally, who else is volunteering at the elderly home? John Ambrose, of course. It's there that they come up with the idea to dig up the time capsule they and their friends — which includes Peter, Gen (Emilija Baranac), Trevor (Ross Butler), and Chris (Madeleine Arthur) — buried outside the treehouse, as it's about to be torn down.

It's after that small reunion that the movie diverges a bit from the book. Rather than getting into a large game of Assassins, the friends all continue on as normal, while Lara Jean and Peter have an argument that leads to them breaking up. During their time apart, Lara Jean and John Ambrose organize a ball for the elderly folks at the center where they volunteer. At that ball, they kiss in the snow — only for Lara Jean to realize that her heart still belongs to Peter.

Lara Jean rushes out of the ball to find Peter... who is already waiting there for her outside. It's a sweet moment that we won't completely spoil here, but Lara Jean once again confesses her love for Peter, and they share a kiss. It's perhaps a bit less poignant than the book, which has Peter confessing his love to Lara Jean outside of their old treehouse, but it's still a very romantic moment. (And they even end up at the treehouse later on.)

Just like with the first film, it's a very cinematic change that makes for a very lovely ending.