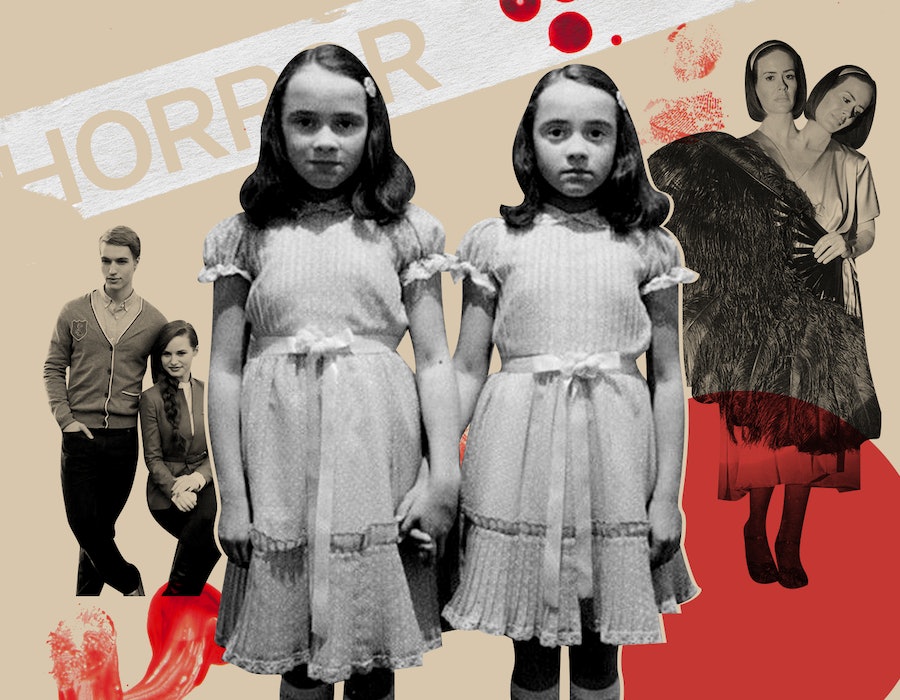 Creepy twins are everywhere in pop culture. They’re performing in American Horror Story’s Freak Show. They’re navigating a vaguely incestual relationship on Riverdale. They’re in so many Lifetime thrillers, they’re basically their own subgenre. Seeing twins in horror movies is like going into the basement or investigating a suspicious noise: it’s one of those universal rules that almost always signals something sinister.

Nothing encapsulates this better than The Shining, a two-and-a-half-hour psychological endurance test that includes all the hallmarks of a good horror movie: a haunted hotel, a disturbed young boy, one man’s gradual descent into ax-wielding insanity. And yet it’s the Grady twins — on screen for less than two minutes in total — who have most deeply imprinted upon the cultural psyche. They’ve been eternally analyzed, parodied ad infinitum, trotted out each year as Halloween costumes. A Google search for them returns over 12 million results, while one for Jack Torrance, the film’s lead character, yields a little under 8 million.

This is in part because a mythos has surrounded twins since essentially the dawn of time. Often assumed to share an insular closeness and an eerie similarity in both appearance and manner, they've served as a longstanding subject of fascination both in literature and society. In the late 19th century, a confluence of events cemented twins as what Karen Dillon, the author of The Spectacle of Twins in American Literature and Popular Culture, refers to as a “double freak.” It was then that P.T. Barnum began parading twins as circus freaks and Francis Galton began experimenting on them amid the early eugenics movement. They became both a public spectacle and a scientific aberration — meant to be gawked at and prodded.

Horror filmmakers began representing this onscreen in the 1930s, starting with Tod Browning’s Freaks and Roy William Neill’s The Black Room. When the genre boomed in the ‘70s, so too did horror stories about twins, including Alan Gibson’s Goodbye Gemini, Robert Mulligan’s The Other, and Brian de Palma’s cult slasher Sisters, all movies in which twins are preternaturally disposed to mayhem and murder. By the time The Shining premiered in 1980, twins had become so synonymous with fear and freakishness that the Grady sisters were instinctually terrifying. Ultimately, it didn’t matter that they weren’t technically twins or may in fact be the same person: they were scary either way.

It’s not just about shock value, though. Horror is most effective when it feeds into our own subliminal fears and anxieties, and twins are a psychic horror as much as they are a visual abhorrence. Identical twins are often used as moral allegories for our internal struggle between good and evil, or else portray an elevated codependence and uncanniness that subconsciously disturbs our notion of individuality. “We tend to feel confident that we are individuals with clear borders,” says Juliana de Nooy, author of Twins in Contemporary Literature and Culture. “[So] to be confronted with an image of people where there’s maybe one person in two bodies or two people in one body, it ... immediately tells us, ‘Gasp, there might be two of us. There might be some scary other me that I can’t control.’”

This calls back to the notion of the shadow self or “id” championed by Carl Jung and Sigmund Freud: the idea that there is some unconscious, uncontrollable other self driving our thoughts, behaviors, and desires. Twins literalize the division between these two selves, forcing us to stare down the parts of ourselves we’d otherwise prefer not to acknowledge.

Unlike its predecessors, The Shining is not explicitly about twins, and at surface level doesn’t delve into these themes deeply. That’s what made it so impactful. “[It has] to be one of the first uses of twins as nothing but an image of horror,” Dillon says.

But it is a film about duality. Isolated in an expansive, empty hotel and driven further and further into the dark corners of his mind, Jack (Jack Nicholson) devolves into his most primal, violent self — or perhaps, as the final scene hints, a past self. His son Danny (Danny Lloyd), meanwhile, spends his stay at the Overlook wrestling his alter ego “Tony” before being overtaken by him entirely. “Danny’s not here, Mrs. Torrance,” he tells his mother late in the movie. “Danny can’t wake up.”

The Grady twins amplify and actualize what both characters are experiencing. Though they’re initially only hinted at, the girls’ presence is felt throughout the film via highly symmetrical scenes, recurring mirror shots, and a continued color scheme that mimics the image of their pale blue dresses against the red of their own blood. As Danny peddles dizzily around the hotel’s maze of hallways, the camera dips to his level, forcing us to see things through his eyes and from a more vulnerable position. By the time he encounters the twins dead-eyed, talking in unison, and beckoning him to “come play,” the movie’s psychological paranoia is at its peak. “At that point, it’s the full horror of, what am I looking at? Is this a hallucination of some sort?” Manchester Metropolitan University horror film scholar Xavier Aldana Reyes says, likening it to the feeling of having double vision. “I think it plays into the film’s focus on, is it really there? Is it not there? Are we going mad?”

All of this helped to sear the Grady sisters into collective memory. Forty years later, they remain the quintessential image of creepy twins — as much a symbol of terror as our enduring obsession.

More like this
Lindsay Lohan Just Recalled A Hilarious 'Parent Trap' Story
By Sam Ramsden
This James Bond Event At Abbey Road Studios Was A 007 Fan's Dream
By Samantha Rollins
These ‘Love Actually’ Plotlines Are “Out Of Date,” According To Director Richard Curtis
By Grace Wehniainen
This Iconic ‘Love Actually’ Scene Drove Alan Rickman “Insane”
By Grace Wehniainen
Get Even More From Bustle — Sign Up For The Newsletter