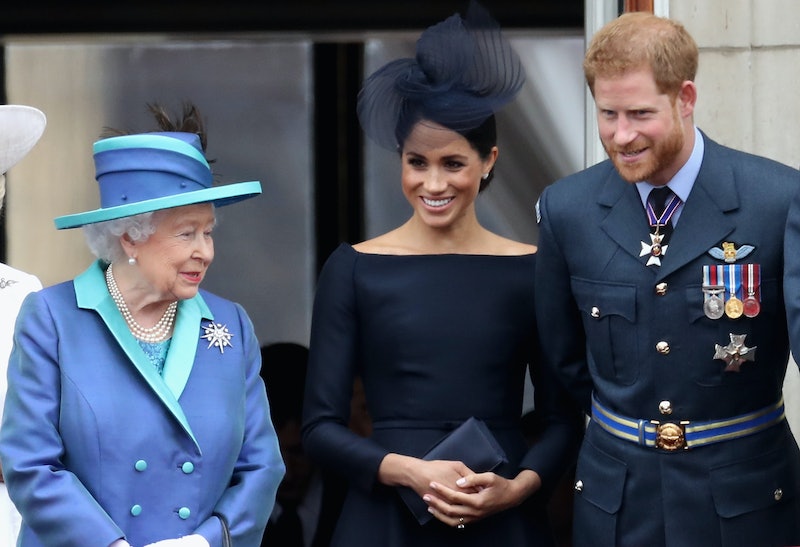 It's a big day for the royal family: Meghan Markle and Prince Harry welcomed their first child, a baby boy, after plenty of anticipation from royal watchers everywhere. And while fans are pretty pumped, nothing quite matches the actual family's enthusiasm. The queen's reaction to the royal baby is straightforward, but exciting. Clearly, she couldn't be happier to become a great-grandmother yet again.

"The Queen, The Duke of Edinburgh, The Prince of Wales, The Duchess of Cornwall, The Duke and Duchess of Cambridge, Lady Jane Fellowes, Lady Sarah McCorquodale and Earl Spencer have been informed and are delighted with the news."

You hear that? Queen Elizabeth II — along with the royals' other loved ones (including Prince William and Kate Middleton) — are "delighted" with the news. It's also touching that the late Princess Diana's siblings were included in the announcement as well.

Additionally, the palace also sweetly shared another update, highlighting Markle's mom Doria Ragland's reaction to the new baby's arrival. The tweet read, "The Duchess’s mother, Doria Ragland, who is overjoyed by the arrival of her first grandchild, is with Their Royal Highnesses at Frogmore Cottage."

In addition to the royal family's series of tweets, the news was also shared on the Duke and Duchess of Sussex's official Instagram. Along with a blue image that read "It's a boy!", the couple's caption stated:

Meanwhile, Prince Harry also gave a speech to the press about his new son and his wife. His enthusiasm was contagious as he told the crowd:

"I’m very excited to announce that Meghan and myself had a baby boy early this morning, a very healthy boy. Mother and baby are doing incredibly well. It’s been the most amazing experience I can ever possibly imagine. How any woman does what they do is beyond comprehension. We’re both absolutely thrilled and so grateful to all the love and support from everybody out there. It's been amazing so we just wanted to share this with everybody."

That same video was shared to Instagram with a note that read, "Their Royal Highnesses thank you for your support and kindness during this exceptionally joyful time in their lives as they welcome their baby boy."

Beyond Harry's speech and the statements posted to Twitter, there's been no further comment from the royal family at this time. However, given the queen's close connection to her grandson and his wife, it's likely she's passed on even more congratulatory messages privately. And it's only a matter of time before the whole world gets to see this new addition, too.