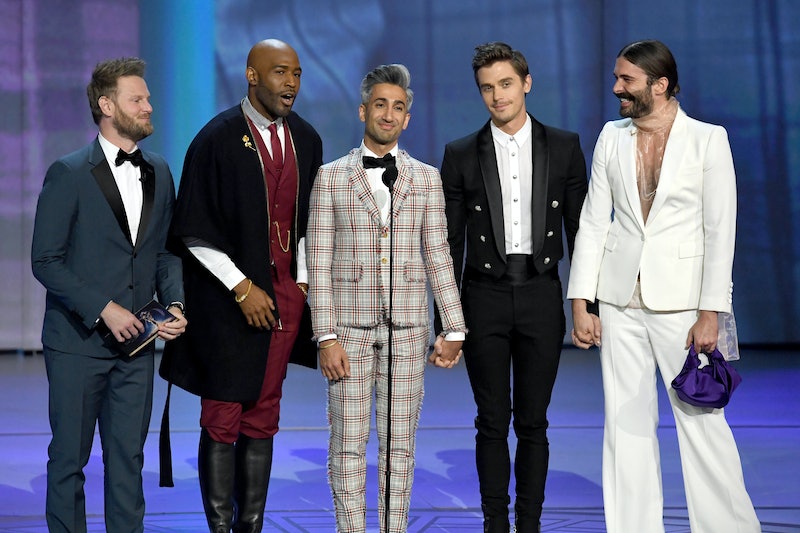 Queer Eye's Bobby Berk shot everyone's collective hopes through the roof when he tweeted at freshman Rep. Alexandria Ocasio-Cortez on Monday offering to renovate her office. When Ocasio-Cortez responded positively, people started to wonder if this meetup could actually become a thing. Well, it is. The Queer Eye cast met Congress, and it already produced some excellent material.

"I’m just a bill on Capital [sic] Hill. <3 U!" Berk tweeted on Thursday, along with a photo with Ocasio-Cortez. Fellow Queer Eye star Johnathan Van Ness posted an even more tantalizing photo on his Instagram of himself along with Berk, Tan France, Antoni Porowski, Ocasio-Cortez, and House Speaker Nancy Pelosi. "Never been more proud," Van Ness captioned the photo, tagging Pelosi and Ocasio-Cortez.

Berk then went on to post a second photo, this time of himself, Porowski, and Ocasio-Cortez with their mouths wide open, posing for a selfie that Ocasio-Cortez was taking.

"I’m SCREAMING! Are you screaming?!" he tweeted along with the photo.

Tan France also joined in on the fun, posting a picture of himself with the two congresswomen, along with the caption, "THE FUTURE IS FEMALE."

Given his level of surprise, perhaps Berk didn't actually expect that his original tweet would lead to an invitation to Congress — but now that it's actually happened, you can start anxiously waiting to find out what he and the team did once they got there.

Berk sent the tweet that started it all on Monday, which happened to be April Fool's Day.

It quickly became clear that Ocasio-Cortez didn't take it as a joke when she responded, telling him to "swing by" her office.

"We’ve barely had time to hang anything up, three of my staffers are expecting babies, and we’ve got a bach pad/warehouse type situation out here. SOS!" she tweeted.

The exchange led to all sorts of speculation, as The Root documented. Was Netflix going to put together a Queer-Eye-visits-Congress special? Would Tan hook Ocasio-Cortez up with in a chic new wardrobe?

While there are no answers on that quite yet, it appears as though the cast went to Capitol Hill on behalf of a cause that would affect LGBTQ people across the country: the Equality Act.

On Wednesday the four cast members spoke at a panel on LGBTQ youth at the Library of Congress, per The Hill. Van Ness then added an Instagram video of himself walking with Ocasio-Cortez and captioned it "Talking policy with @ocasio2018 #equalityact."

"What we really need is to have some sort of federal legislation that does protect people who are LGBTQIA+ in states like Kentucky, Missouri, Alabama — where you can be fired and you can be discriminated against for who you love and what gender you are," Van Ness said at the Library of Congress panel, according to The Hill.

Van Ness also offered some thoughts on which members of Congress he would most like to make over on the show — and to give you a hint, it's not either of the women that four of the Fab Five posed with.

“I would say Mitch McConnell in his entirety is really upsetting,” Van Ness said, per The Hill. “He’s just, everything, the weight of the world and of the oppression is weighing on him and it is showing.”