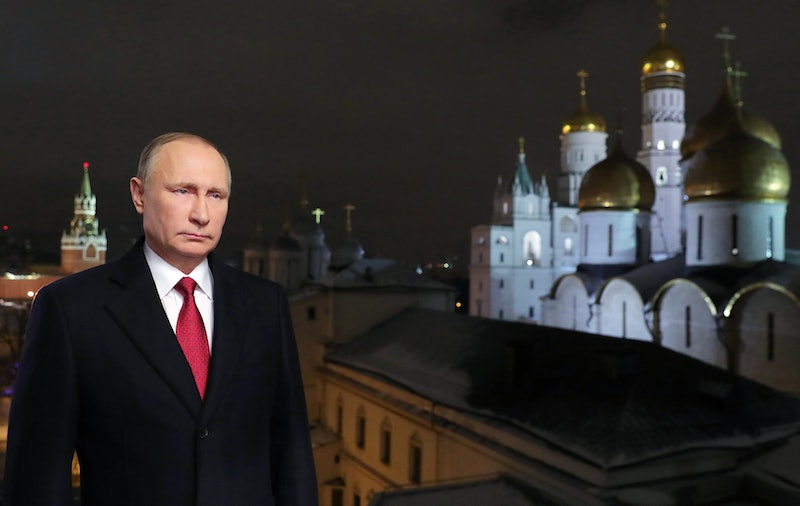 The U.S. government released a declassified report on Friday confirming our worst fear: Russian President Vladimir Putin worked to influence the 2016 election. According to the U.S. national intelligence report, Putin ordered a "covert influence campaign" to denigrate Democratic presidential candidate Hillary Clinton and bolster support for President-elect Donald Trump. While Americans had their suspicions that Russia was responsible for the major hackings throughout election season, it turns out British intelligence knew about the Russia hack before American officials did. And fortunately for Americans, the Britons helped them out.

Titled “Assessing Russian Activities and Intentions in Recent U.S. Elections," the national intelligence report provides a detailed assessment of how Putin led a year-long campaign that employed hackers, state-funded media, and paid social media "trolls" to undermine Clinton's campaign and the Democratic and Republican parties. The report confirmed that Russian hackers gained control of the Democratic National Convention networks in July 2015, and were also responsible for releasing Clinton campaign manager John Podesta's emails via WikiLeaks. "We assess with high confidence that the GRU used the Guccifer 2.0 persona, DCLeaks.com, andWikiLeaks to release US victim data obtained in cyber operations publicly and in exclusives to media outlets," the report stated.

While there's been a great deal of speculation about Russian involvement in these high-profile hacks, particularly those targeting the DNC and Podesta, Americans apparently weren't the first to come to that conclusion. According to a New York Times report, British intelligence tipped off the U.S. government — way, way before Election Day.

So, Americans could thank the Brits for not only keeping an eye out, but for also stepping in. This is possibly the best example of, "If you see something, say something."

But the extent of British involvement is still unclear. 10 Downing Street has kept mum, and British Prime Minister Theresa May has yet to release a statement regarding the new intelligence report.

It is clear, though, that Western world leaders have been paying attention to Russia's covert dealings with U.S. politics, and that Germany, in particular, may be reading this report with interest. Following the WikiLeaks dump of thousands of emails between U.S. and German intelligence, German Chancellor Angela Merkel feared that Russia attempts to interfere with Germany's upcoming elections.

Meanwhile, Trump has also kept silent on British intelligence's early discovery of Russia's cybersecurity breaches. Early Saturday morning, the president-elect sent out a series of tweets claiming the media is only discussing the declassified intelligence report is because the Democratic Party lost the election. He also claimed that the Republican National Committee had a "strong defense," which is why Russia couldn't hack into the RNC networks.