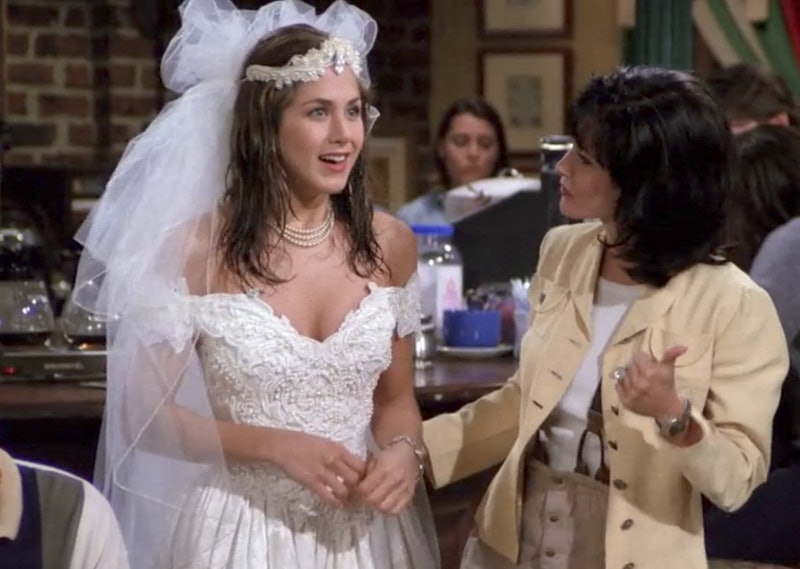 Out of the series' 236 episodes, there is one Rachel-centric Friends episode no one appreciates enough: the pilot. Even though it technically serves as an introduction to the comedy and its characters as a whole, the first episode of Friends focuses heavily on Rachel. She comes busting through Central Perk's doors and viewers immediately understand that Jennifer Aniston's character is going to be huge. As soon as she shows up, Rachel becomes the center of the episode — and not only because she is wearing a giant wedding dress.

What makes this particular episode a stand-out for Rachel is that fans immediately get a glimpse of who the real Rachel Green is and where she wants to take her life. When viewers first meet her, she has just run away from her wedding to Barry. She's soaking wet, sitting on the coffee shop's couch, and hilariously explains to this group of five individuals who she has no idea will eventually become her family, "I realized I was more turned on by this gravy boat than by Barry. And then I got really freaked out and that's when it hit me, how much Barry looks like Mr. Potato Head." She adds with total seriousness, "Then I started wondering, 'Why am I doing this? Who am I doing this for?'"

At this exact moment, the true Rachel begins to shine. She respects herself, wants more out of life, and despite escaping her wedding through a bathroom window, she refuses to settle for the life everyone expects her to pursue. It's something her family doesn't understand. Later, Rachel tries to explain to her father why she did what she did, but he still can't wrap his around why she would give up a life with a man who has money.

Once again, her dad doesn't get what she's trying to say, nor does Ross when she tells him the story, but her metaphor absolutely makes sense. For years, Rachel thought she had to follow her in mother's footsteps by marrying a wealthy doctor — and lose herself and her dreams in the process. Luckily, before she makes a massive mistake by marrying Barry, she realizes this isn't what she wants from life or love.

Rachel even tries to get a job in the pilot to take more control, but ends up going shopping instead with her dad's credit cards and finds a pair of "'I don't need a job, I don't need my parents, I've got great boots' boots." After her friends ask if she found a job, she replies, "Are you kidding? I'm trained for nothing." Between this comment and her buying a new pair of shoes, viewers get an even bigger glimpse of Rachel, the spoiled, rich girl, than before. However, there's so much more to her than that.

She's trying to turn her life around and to make something of herself, but it isn't going to happen overnight. Thankfully, she has Monica and everyone else to help guide her along the way. At the end of the episode, Rachel cuts up her credit cards. As Monica says to her, "Welcome to the real world, it sucks, you're gonna love it." From this moment on, Rachel becomes the successful, talented woman she was always meant to be. She doesn't lose herself along the way, either. She still loves shopping, but turns that passion into a career as she works her way up the fashion industry ladder.

And after she establishes a life in the city, her mother, Sandra Green, comes to visit and expresses her jealousy over Rachel's newfound zest. In the Season 2 episode "The One With the Lesbian Wedding," Sandra reveals she's divorcing her husband and Rachel is beyond upset. Sandra says to her daughter, "I guess I figured of all people you would understand," before adding, "You didn't marry your Barry, honey, but I married mine." Unlike her mother, Rachel was able to escape a future that she thought was set in stone for her much earlier on.

Upon first meeting Rachel in her wedding dress, fans might think she's a privileged daddy's girl, but, really, she's a woman seeking more for herself and grabbing life by the horns before it's too late. That's what makes Rachel Green so memorable — and so inspiring.