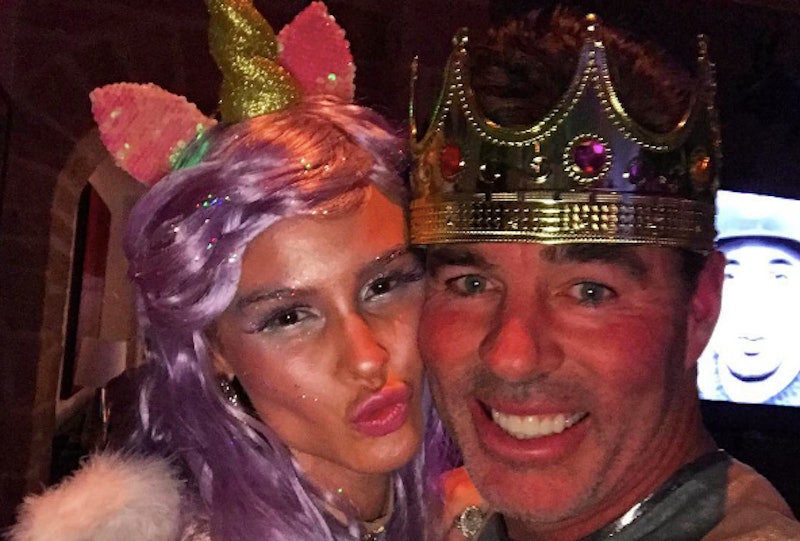 With Halloween on a Tuesday this year, it's tough knowing when to celebrate. Thankfully, the Real Housewives stars are always looking for a reason to celebrate any occasion. Plenty of Real Housewives have been rocking Halloween costumes since the weekend before October 31, and some of their outfits are, as expected, pretty over-the-top.

Loyal Housewives viewers are well-aware that the cast members are all about themed events. Plus, they have higher budgets than most people and their own glam squads, so of course the ladies were dressed to the nines with their Halloween ensembles.

Based on some thorough social media stalking, a lot of the women started celebrating before Halloween. It makes sense. Not only were there parties on the weekend before the holiday, but they also get an excuse to wear more than one costume, which is always the best way to go.

Wait. 50 Cent, is that you? No, that's actually Real Housewives of Atlanta star Cynthia Bailey passing for the rapper's doppelgänger. Not only does Cynthia look the part, but "50 Cynt" is just way to good an opportunity to pass up.

Dorit Kemsley and her son Jagger coordinated their looks with superhero costumes. Dorit as Wonder Woman and Jagger as Spider-Man made them the perfect Halloween duo.

Considering that Ramona Singer is always celebrating a "renewal" of some sort with the different reincarnations of her image on Real Housewives of New York City, it makes sense for her to channel the queen of reinventing herself: Britney Spears. Plus, she's Brit in one of her prime phases: "Oops!... I Did It Again." Iconic.

Margaret Josephs and her husband, Joe Benigno, channeled Dolly Parton and Kenny Rogers from their "Islands In the Stream" duet.

Meghan Edmonds As A Unicorn

Meghan Edmonds was on board with the unicorn trend this Halloween.

Thankfully, Luann de Lesseps kept the countess title around for Halloween. She even invented her own costume: Countess Dracula. Or at least that's what she is according to her Instagram caption. It kind of looks like she's a cross between a vampire, Marie Antoinette, and a countess, but it's definitely working for her. And look at all these Luanns she met!

After beefing with Kim Zolciak over a video that Kim's daughter Brielle Biermann recorded that claimed there are roaches at NeNe's home, NeNe decided to go as pest control with her husband, Gregg Leakes, dressed up a roach.

It's a little unclear what Bethenny was for Halloween, but it is very clear that she went all in with her costume (and even the background for this photo). She could be Barbie, Elle Woods from Legally Blonde, Kameron Westcott from Real Housewives of Dallas, or someone else, but she is definitely slaying.

Kim Zolciak As A Playboy Bunny

Meanwhile, Kim and her husband, Kroy Biermann, paid tribute to the late Hugh Hefner and his Playboy empire with their coordinating costumes.

Teresa Giudice As A Soldier

Porsha Williams As A Mouse

Porsha Williams is a mouse... duh! She looked absolutely adorable in her ensemble.

Melissa Gorga As A Ringleader

Melissa Gorga made it clear that she calls the shots with her ring leader costume.

Kandi Burruss As It

Wow. That is some killer makeup. Kandi Burruss was very topical with this costume choice.

Kenya Moore showed off her best Victoria's Secret runway walk in this Instagram video, giant wings and all.

The Real Housewives of Potomac star went all in for her ensemble.

The Real Housewives got really into Halloween this year and there will be even more costumes to come... most likely.