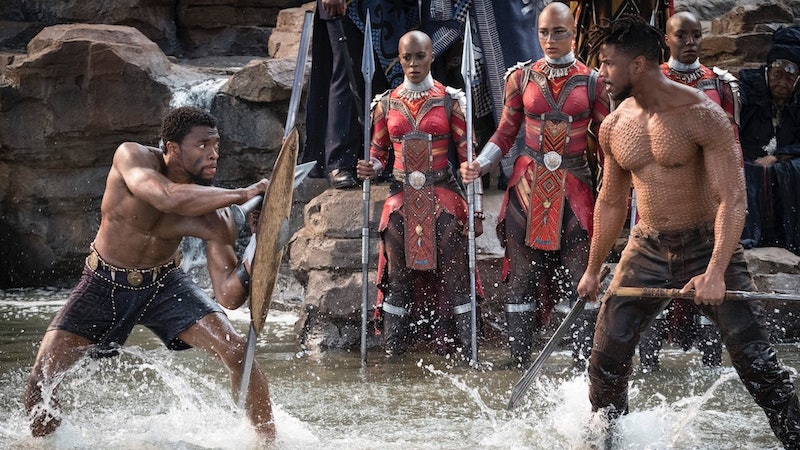 Following the perilous events of Avengers: Endgame, Marvel fans are no doubt still reeling from the aftermath of our heroes’ fight against villain Thanos. Still, there’s a lot to look forward to after the mournful storylines, because Disney just released the premiere dates for every Marvel movie slated to hit the big screen in the next three years, and it paints a very interesting picture.

While Spider-Man: Far From Home will arrive in theaters on July 2, not much else is known in regards to future of the Marvel Cinematic Universe. But, here’s what we do know: according to a press release obtained by Bustle, Disney is slated to release eight (yes, eight!) new Marvel films between 2020 and 2022. And, yes, we have specific dates. Next year, in 2020, Disney is set to release two untitled Marvel films on May 1 and Nov. 6. The following year, in 2021, fans will see the release of three additional untitled Marvel flicks on Feb. 12, May 7, and Nov. 5. And finally, for 2022, three untitled Marvel films are slated for releases on Feb. 18, May 6, and July 29.

So, what could these untitled Marvel films possibly be? Given that fans are already somewhat aware of Marvel projects in the pipeline, it isn’t too difficult to piece together which of our Marvel heroes’ will hit the big screen in the next three years. Below are a few of the contenders to arrive on our movie screens by 2022.

Guardians of the Galaxy 3

Guardians of the Galaxy 3 is a given. After a fallout that stemmed from old resurfaced tweets, Disney reinstated director James Gunn in March. Gunn, who directed the first two installments of the franchise, is expected to finish Warner Bros.’ Suicide Squad sequel before production on Guardians of the Galaxy 3. So, Peter Quill will definitely grace our screens sometime in the next three years.

Last October, news broke that writer and director Ryan Coogler had officially signed on to pen the sequel for the highly-successful Black Panther. The groundbreaking film, which was the first in the MCU to star a black superhero, shattered Box Office records and serves as the third highest-grossing Marvel film. We’ll be returning to Wakanda soon enough.

In March, it was announced that Short Term 12 director Destin Daniel Cretton had signed on for the upcoming Shang-Chi film, the first from the studio to feature an Asian superhero. In the Marvel comics, Shang-Chi is referred to as the “Master of Kung Fu.”

Chloé Zhao is slated to direct the upcoming The Eternals, which features a group of oddball species of humankind whose powers derive from being experimented on. To make the film sound all the more intriguing, Angelina Jolie and Kumail Nanjiani are reportedly in talks to join the film. We’re ready to dive into this strange Marvel universe.

The stand-alone Black Widow would mark the second female-led Marvel film. Considering the success of Captain Marvel, we’re all ears. Scarlett Johansson will reportedly reprise her role as Natasha Romanoff for this prequel that examines her life as a Russian spy.

Benedict Cumberbatch is set to reprise his role as Doctor Strange, as officially confirmed in reports from December of last year. Director Scott Derrickson, who directed the first successful installment, will return for the sequel. So, Dr. Stephen Strange is definitely in our future.

Is it happening or is not? Ant-Man’s sequel, Ant-Man and the Wasp, arrived in theaters last July to much fanfare, and fans are clamoring for a follow-up. Will there be a third film? At the moment, cast and crew seem unsure. In an interview with Radio Times, Paul Rudd said he’s “had conversations” with director Peyton Reed. He ultimately added, “I’d hate to go into any specifics. Even though that is what you want! Because it might not happen.”

And those are just some of the possible titles coming in the MCU. The next three years will be certainly be an exciting one for Marvel fans. We just don't know which film we're excited for most.

More like this
Everything You Need To Know About ‘Black Panther: Wakanda Forever’
By Bustle Editors
A New Scooby-Doo Movie Confirmed Velma Is Gay & Twitter Is Pumped
By Radhika Menon
The 50 Most Powerful Characters In The Marvel Universe, Ranked
By Johnny Brayson and Nola Pfau
Lin-Manuel Miranda & Tituss Burgess React To 'Little Mermaid' Casting Backlash
By Radhika Menon
Get Even More From Bustle — Sign Up For The Newsletter