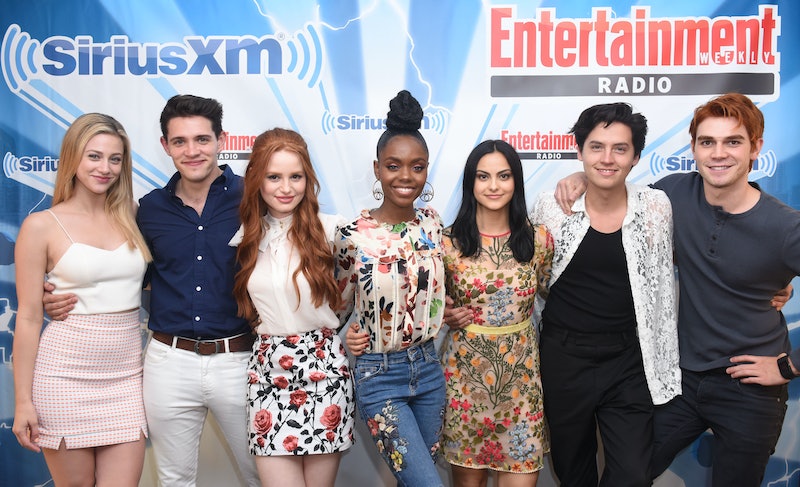 After an agonizing wait, new episodes of The CW's Riverdale have finally premiered. Now that fans can confirm who's alive, who's dead, who's staying together, and who's grown to be really annoying (cough, Archie), it's time for an important analysis. The Riverdale character you relate to most based on your Zodiac sign, is a question that begs answering. Especially before the Chilling Adventures of Sabrina spinoff airs, because that's going to be a whole other story. Literally.

Though the murder of Jason Blossom was solved at the end of Riverdale Season 1, Season 2 is already more bananas than a banana split from Pop's. That's a good thing, of course; Riverdale is best when it's delightfully, logic-defyingly over-the-top. Few teen dramas would air a steamy shower scene wherein one of the participants is covered in a parent's blood. And that was just in the Season 2 premiere.

The citizens of Riverdale have a little bit of everything in them. They're fun, they're funny, hardworking, spontaneous, mysterious, and surprisingly twisted. And that's just the high school students. The adults are full-blown bonkers. It's a far cry from the Archie Comics you grew up with, and they prefer it that way. This is the Riverdale character you relate to most, based on your sign:

Duh. Riverdale High's fiery, sultry Queen Bee could only be more Aries if she were a literal ram. She enjoys revving people up just to mess with them, and it's their fault for not enjoying it. An Aries doesn't try to be extra; extra is their natural state. Cheryl crashed a funeral she was disinvited from, wore all white, and gave a speech, and it was just another day in Cheryldom for her.

Taurus women are strong, reliable, and loyal. They don't trust easily, and go on the offensive for fear of being hurt. This is best represented in Josie, whose diva-adjacent attitude stems from parental and societal pressure, as well as her drive to be taken seriously as a musician.

Betty Cooper is never quite what people expect. That helps explain why she loves Jughead so much. There's two sides to everything about Betty: She's a Blossom (gasp!) and a Cooper; a mild-mannered sweetheart and a teenage rebel; Dark Betty and Betty Classic. Betty is someone who won't be underestimated, but that's because she's grown to be so unpredictable. A high ponytail and bloody palms have fans more spooked by her than Cheryl Blossom.

Cancers are naturally emotional, but will withdraw abruptly, which can make them difficult to read. Fred Andrews could use a drink, a hug, and a pal to listen to his life struggles — all of which he reacts to with the same intensity. First to laugh, first to cry, likely to treat their son sneaking out of the house with the same level of emotion as being literally shot by a criminal; that's Cancer. Hang in there, Mr. Andrews.

Glamorous Ronniekins doesn't take sh*t from anyone. And don't you dare try to hurt her friends. Leos are proud and protective, but are prone to vanity as well. Veronica might have a high self-opinion, and rightfully so, but she's been trying to temper herself since the move from New York City.

A colder counterpoint to her red-hot Leo daughter, Hermione is a different breed of Lodge. She's less controlled by her temper, and favors practical calculation over acting on emotion. Hermione is warm and motherly, which she uses to belie her power over Riverdale's industry. Even when she threatens to smack Veronica for disrespecting her, there's a detachment to it — the idea of a slap is punishment enough in Hermione's mind.

Libras are deeply caring, fans of justice, and endlessly likable. They're similar to fellow Air sign Gemini (hi, Betty) in the sense that they're unpredictable. Libras don't instantly come across that way, though, which just adds to the occasionally annoying air of mystery that surrounds them. Could anyone be more Libra than Polly Cooper?

If you do not understand why Riverdale High's Archibald Andrews is a Scorpio (the most passionate, infuriating, impossible to read, intense, and magnetic of all dudes in the Zodiac) then you have not watched this show, or you are currently in love with a Scorpio male and refusing to admit it. Possibly, both.

Artistic, friendly, and easily frustrated, Val is the consummate Sagittarius. She doesn't need to be frontwoman for the Pussycats, but she does need to make her voice heard. Figuratively and literally. Val represses her annoyances until something snaps, which isn't super mature, but is highly Sagittarius.

F.P. Jones, you inscrutable Serpent king. Ambitious and determined — though, admittedly, for the wrong reasons — this South Side dad is tougher than Cheryl Blossom's nails. He's also just aloof enough to pique people's interest in him. How is it possible that such a deadbeat dad is weirdly charismatic, too? It's a Capricorn thing. Not the deadbeat, part. The low-key charisma.

Aquarians are original — In a crowd of them, no two are alike. Gather a group of Virgos together, for instance, and they'll all end up making lists and charts for the best way to organize themselves. With Aquarians, all bets are off. This Air sign is independent, unique, a great listener, and doesn't run from trouble.

C'mon, Pisces. You knew this was coming. You knew, and you secretly loved it. Go ahead and tweet "OMG," or "rude," or "shook" about it, though. No one has to know.

Whether you're a dazzling Leo lioness or a Gemini guarding a secret, your sign is represented in the town of Riverdale. If you really don't connect with anything here, just wait — the Riverdale spinoff about Sabrina is set in neighboring Greendale, and we all saw what happened to Ms. Grundy there in the premiere. Is that dark enough for you, moody signs? You know who you are.

More like this
The 'Reasonable Doubt' Cast Includes A 'Save The Last Dance' Reunion
By Grace Wehniainen
Is The Serpent Queen Based On A True Story?
By Maxine Harrison
'Elite' Season 6 Is Arriving Sooner Than You Think
By Gretchen Smail and Grace Wehniainen
What’s New On Netflix: Ana De Armas’ 'Blonde' & A Nick Kroll Special
By Arya Roshanian
Get Even More From Bustle — Sign Up For The Newsletter