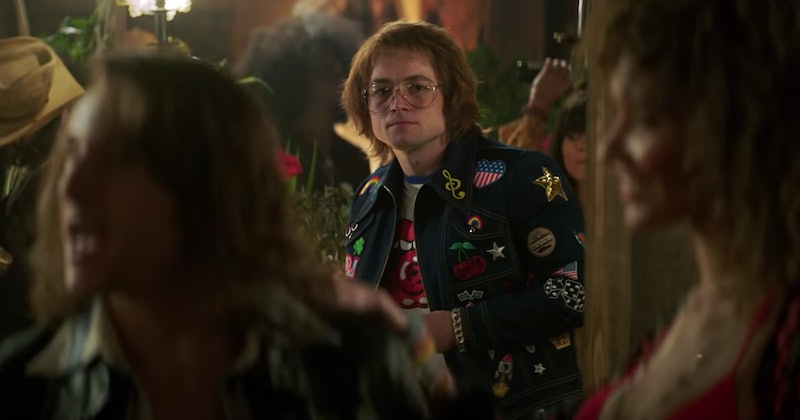 The highly awaited movie about Elton John's life is in theaters now, and it's not another Bohemian Rhapsody. Rocketman, starring Taron Egerton as the legendary artist, is a true musical, meaning that the people in it spontaneously break out into song and dance, as if using the British rockstar's music to narrate the story itself. As you can imagine, the Rocketman soundtrack serve as something of a greatest hits cover album, since John himself only sings on one of the tracks. The tracks in the film include some of John's biggest smashes, of course, but also a few lesser-known songs that help to tell the story.

In so many music biopics, the songs play only during times when it's being performed for crowds or recorded in the studio. That happens sometimes in Rocketman, and the movie provides fleeting glimpses into what the process of writing hits like "Your Song" was like, but the movie also has big choreographed dance numbers. In addition to Egerton's singing, the soundtrack includes vocals by costars Gemma Jones, Bryce Dallas Howard, Steven Mackintosh, Richard Madden, Jamie Bell, and more.

John himself duets with Egerton for the soundtrack's sole original song, "(I'm Gonna) Love Me Again," which John co-wrote with longtime lyricist Bernie Taupin (played by Jamie Bell). Fortunately, Egerton's singing skills and physical transformation into John will make audiences feel like they're watching and listening to the real rockstar. So you won't really feel his absence.

Some of the more surprising songs that appear on the Rocketman soundtrack include "Pinball Wizard," which was originally a Who song but which John indeed covered, and some of the artist's earlier songs, like "Amoreena." Of course, the movie dutiful delivers fan service by including the most popular of John's songs, including "I'm Still Standing," "Goodbye Yellow Brick Road," "Tiny Dancer," "Crocodile Rock," and, of course, the titular "Rocket Man."

The film's soundtrack is already streaming everywhere you'd normally find your music, and you're going to want to listen to it all over again after seeing the exuberant film. Then again, you may also want to make up your own playlist of Elton John songs so you can add in the ones that Rocketman leaves out. The film leaves off in the mid-'80s, so Can You Feel the Love Tonight, for example, is sorely missing.

While there can only be one Elton John, everyone involved in the project seems to agrees that Taron Egerton is a dead ringer for the real singer, including the man himself. Giles Martin, Rocketman's music producer, told W, "Elton said, 'I don't think I've heard anyone sing my songs better than Taron.'" In various interviews, both Martin and Egerton revealed that they didn't set out to make John's songs sound exactly like the originals in the film. "He told me very early on that he didn’t want me to try and sound like him," Egerton told The New York Post of John, who executive produced Rocketman. "He wanted me to make the songs my own. He wanted me to be creative with them rather than just copying him."

You can always listen to the originals if you're in the mood for the real thing. But with Egerton and the rest of the cast adding their own flair to the music, the Rocketman soundtrack offers a new way to enjoy John's iconic songs.