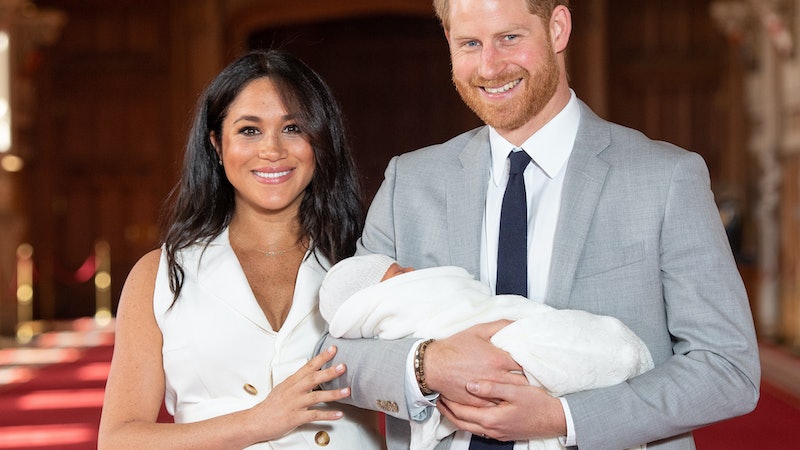 The world has waited with bated breath for two days to see the newest addition to the royal family. On Wednesday, May 8, Meghan Markle and Prince Harry introduced the royal baby in a photocall in front of a few select members of the media. The couple have spent the past 48 hours holed up in Frogmore Cottage in Windsor, enjoying time with their adorable baby boy, and this is the first time they have stepped out as a family together since the birth.

During their first family appearance, the couple and their two-day-old son didn't have to brave the lovely British rain. Instead, the brief event was held inside Windsor Castle; close to Meghan and Harry's family home. The baby — who remains unnamed — slept throughout the entire photocall, but his parents opened up about his personality.

Meghan described her first parental experience as "magic", adding: "It's pretty amazing, I have the two best guys in the world so I'm really happy." When asked how their son was doing, the Duchess of Sussex said: "He has the sweetest temperament. He's really calm." She finished by calling her newborn son "the dream." The couple said they were "still trying to figure out" who their baby looked like, but Harry admitted that his looks have been changing by the day.

The timing of the photocall broke royal tradition. Usually, a royal baby is shown to the public just hours after its birth, but Meghan and Harry chose a different path, Metro reports. An official statement released in April informed the world that the couple had "taken a personal decision to keep the plans around the arrival of their baby private."

In fact, news of the baby's birth only reached the press in the afternoon of Monday, May 6, according to the Telegraph. A statement from the royal family confirmed that Meghan and Harry's son was born at 5:26 a.m. that morning.

Now that the photocall is done, the royal couple are expected to meet the Queen and Prince Philip. A name for the baby may be announced shortly after that meeting. Harry may not be around for long, as Harper's Bazaar reports. On Thursday, the Duke of Sussex is scheduled to visit the Netherlands to promote the 2020 Invictus Games.

Meghan, however, is expected to remain on maternity leave for the next few months. Although she is a patron of several organisations, her schedule is likely to be kept clear until the autumn. Vanity Fair royal correspondent Katie Nicholl told the BBC live in Windsor that Meghan's next official appearance is reported to occur in October. But this has not yet been confirmed.

As today's photocall proved, Meghan and Harry are set do things a little differently. While Prince William and Kate Middleton chose to show their newborn babies in front of a throng of cameras, the Duke and Duchess of Sussex seem to prefer a much quieter way of life. Only time will tell exactly what that will entail.

More like this
Oprah Winfrey Revealed Her Hopes For Prince Harry & The Royal Family
By Maxine Harrison
10 Photos Of William, Harry, & Their Cousins Honoring The Queen Together
By Stephanie Topacio Long
Camilla Paid Tribute To The Queen In A Heartfelt Video Message
By El Hunt and Sam Ramsden
William & Kate Shared How Their Kids Are Doing As They Mourn The Queen
By Stephanie Topacio Long
Get The Very Best Of Bustle/UK