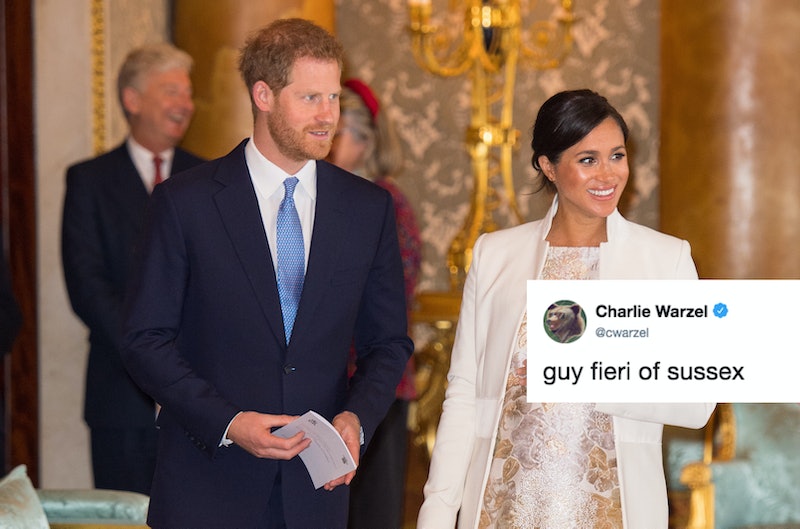 The newest royal baby has finally arrived, and the world now knows that unto us, a son is born. One mystery still remains, though: What are they going to call the little guy? Well, according to the Daily Express, Prince Harry and Meghan Markle's baby's name will reportedly "unify" the U.S. and the U.K — and naturally, Twitter has thoughts.

In 2018, Baby Center reported that the three most popular baby names for boys in the U.S. were Jackson, Liam, and Noah, according to Newsweek. In the U.K., the outlet proclaimed that Muhammad, Oliver, and again, Noah, topped the list. So, if Harry and Meghan actually wanted to unite their two home countries in a logical way, they should probably just call him Noah, right?

Nope. Not according to some users on Twitter, at least. After the Daily Express reported on May 6 that the new parents would choose an "UNUSUAL name for baby that UNIFIES the US and UK," tons of tweets with hilarious suggestions began to roll in. Many of them are, in fact, *quite* unusual, but not in the way you might think. Not in the way that celebrities name their kids after like, fruits, or New York boroughs, or cardinal directions or whatever.

So, what kinds of names are people proposing you wonder? Well, here's a round-up of some of the best responses so far.

Rapper 21 Savage has long-repped his Atlanta roots. On Feb. 3, however, ICE detained him for allegedly living in the U.S. illegally. They claimed that he was born in the U.K., and fans were like, "Wait, what?" As it turns out, he'd reportedly been living in Atlanta since he was 7, but his parents failed to renew his visa — and it caused a major uproar. (He claimed he was unfairly "targeted.") 21 Savage has since been released, and is about to go on tour in North America. This one is pretty contextually spot-on, TBH.

The world-renowned author of the Harry Potter franchise, plus the biggest annual U.S. sports showdown equals popularity of epic proportions. In theory, at least. Doesn't exactly roll off the tongue, though.

Even though Sandra Oh hails from Canada, her long-time role on Grey's Anatomy made her way famous in the States. She recently won an Emmy for her role on the BBC's Killing Eve — which, by the way, is *so* good — giving fans on both sides of the pond a reason to rejoice.

The Simpsons' Homer Simpson is one of the most beloved cartoon characters of all time in the U.S. Wallis Simpson ... well, she was American, too, but she wasn't quite as beloved. Simpson caused a ruckus when King Edward VIII abdicated the British throne to marry her back in 1936. Said ruckus was caused because Simpson had previously been divorced — just like Markle — and that was very much frowned upon back then. Good thing times have changed, though, huh?

The body of water that literally connects the U.S. to the U.K.

This bear with the red hat and blue coat is beloved in the U.K. and the U.S.

This one is like the Choose Your Own Adventure of famous pop-culture mash-ups from the U.S. and the U.K. Prince might be *the* one, though. Remember when Prince (the musician, RIP) changed his name to a symbol? Is there like, a symbol for the royal meaning of Prince? They could call him like, "the baby currently known as Prince" or something if they wanted to be really unique.

So, which way will Harry and Meghan go? Only time will tell. My vote's for LeBron Thames. Just sayin'.