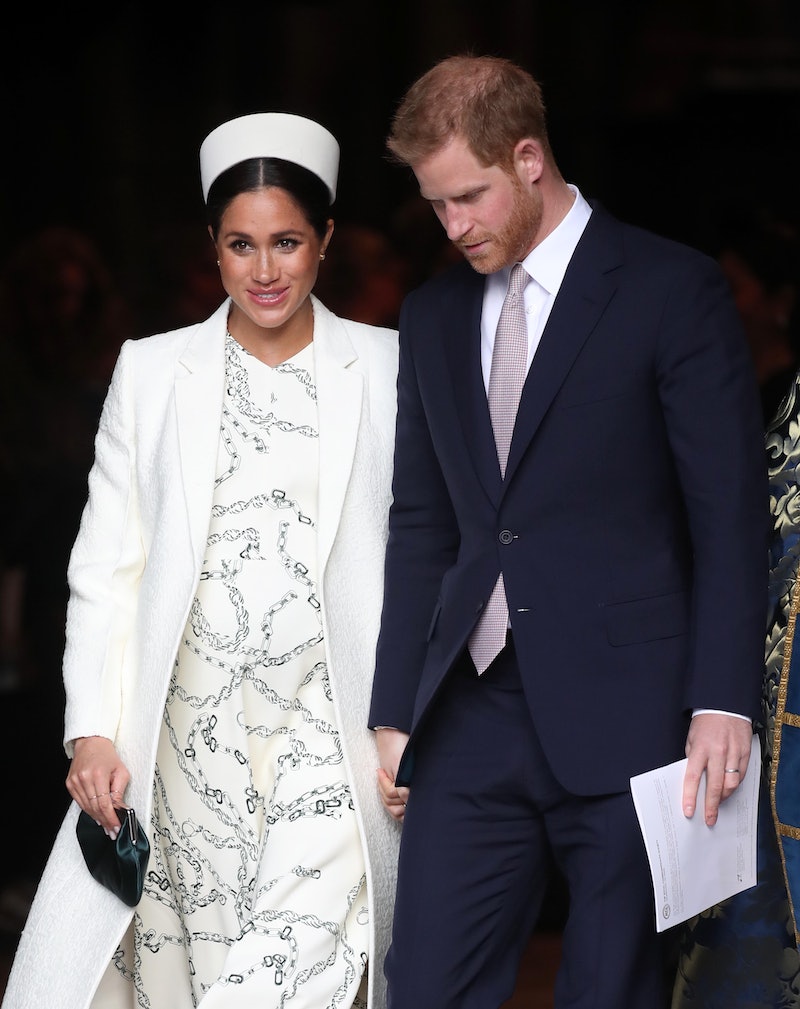 Major news broke on Monday morning: Prince Harry and Meghan Markle's baby has officially arrived. The announcement was made via the Sussex Royal Instagram account, as well as the royal family's Twitter and website. The royal family's statement about Prince Harry and Markle's baby includes most of the details fans would want to know. The only thing missing? The newborn's name. However, per the IG post, "More details will be shared in the forthcoming days."

"Her Royal Highness The Duchess of Sussex was safely delivered of a son at 0526hrs this morning.

The Duke of Sussex was present for the birth.

The Queen, The Duke of Edinburgh, The Prince of Wales, The Duchess of Cornwall, The Duke and Duchess of Cambridge, Lady Jane Fellowes, Lady Sarah McCorquodale and Earl Spencer have been informed and are delighted with the news.

The Duchess’s mother, Doria Ragland, who is overjoyed by the arrival of her first grandchild, is with Their Royal Highnesses at Frogmore Cottage.

Her Royal Highness and the baby are both doing well."

Considering how close Markle is with her mother Doria Ragland, it's sweet to see her mentioned in the statement. It was reported a few weeks ago that she had arrived in London to be close with her daughter as she prepared for the baby's arrival.

In case the written statement isn't enough to bring royal watchers instant joy, Prince Harry also made a speech about his new son that definitely could be described as short and sweet. He said,

"Meghan and myself had a baby boy early this morning. Very healthy boy. Mother and baby are doing incredibly well. It's been the most amazing experience I could ever possibly imagine."

He also gave credit to Markle and other mothers, saying "How any woman does what they do is beyond comprehension, but we're both absolutely thrilled and so grateful to all the love and support from everybody out there."

The news of the royal baby's arrival came shortly after word spread that Markle had gone into labor earlier that same morning. Buckingham Palace had announced that detail with a statement early Monday that read:

"The Duchess of Sussex went into labour in the early hours of this morning.

The Duke of Sussex was by Her Royal Highnesses’ side.

An announcement will be made soon."

They really weren't kidding with that "soon" part. Now, all eyes will be on the royal family's social media account for two big things: Markle and Harry's baby's name and photos of the newborn.

However, if you're expecting a post-labor photoshoot on the hospital steps, like Markle's sister-in-law Kate Middleton has done for her three children, it won't be quite like that. The Duchess of Sussex is switching things up. Per a statement made last month,

The couple plans to have a small photoshoot at Windsor Castle a few days after giving birth, according to People. Since the baby is here, now the waiting game for those photos officially begins. And in the meantime, at least the couple is enjoying their newest addition's arrival in privacy, like they deserve.