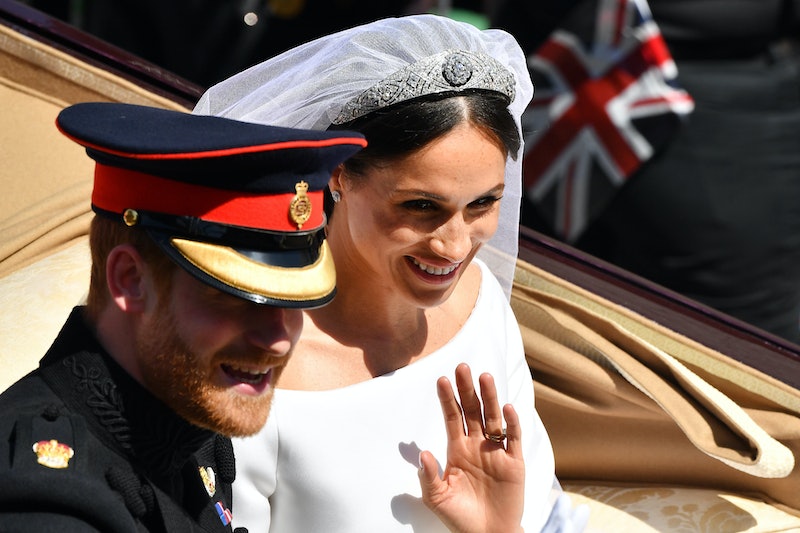 Like a real-life heist movie scene, a royal tiara called the Royal Portland Tiara was stolen right out of its display case in Nottinghamshire, England this month. The crown in question was a 20th-century piece created specifically for Winifred, Duchess of Portland, to wear to the 1902 coronation of King Edward VII, who was Queen Elizabeth's great-grandfather and Queen Victoria's son. Winifred was one of the four Duchesses who were named canopy bearers for Alexandra, King Edward’s wife, during the ceremony in Westminster Abbey, holding the canopy for the new Queen as she was anointed. Because of the honor, her husband commissioned Cartier to make her a tiara worthy of the occasion. Her husband was the sixth duke of Portland, so the jeweler used a show-stopping jewel from the Portland family collection to create it. The tiara revolves around the Portland Diamond, which is bordered by diamond drops and pendant diamonds, creating looping circles around the crown of the head.

According to Hello! Magazine, the tiara is an important part of royal history, because it was crafted specifically for the first coronation in over fifty years in Britain, following the death of Queen Victoria, who ruled for 63 years. You can even spot the tiara in historic paintings depicting the momentous event.

The royal treasure was kept at the Portland Collection Gallery at the Welbeck Estate in Worksop, Nottinghamshire, and it appears that some visitors coveted the accessory a little more than others. Like a scene out of Ocean's 8, a group of thieves used power tools to get through an armored glass case just before 10 p.m. on Tuesday, and snatched the tiara as alarms sounded and the guards were alerted. But the security guards didn't get into the gallery room in time.

"Security services missed the thieves by 90 seconds and the police arrived on the scene two minutes later," a spokesperson for the Welbeck Estate told the BBC.

Bagging the tiara and also a diamond brooch made from jewels removed from the original tiara design, the thieves then pealed out of there in an escape vehicle thought to be a silver Audi S5 — which was found abandoned and burnt in a town 30 minutes away, according to Vanity Fair. While it's not confirmed if the Audi is the official getaway car, the police are looking into it and are currently following that lead.

Some jewelry curators have said that the tiara is one of the greatest historic tiaras of the nation, which means that the headpiece would be quite difficult to sell when police across the United Kingdom are looking to find it. Which could lead to a worrying thought: the thieves might have to dismantle the tiara in order to make money off of it.

"It could be worth millions — but it is such a well-known piece it can't come up for public sale," James Lewis from Bamford auctioneers told the BBC. "The most horrendous thought is it could be something called a 'breaker', where the diamonds are taken out and sold individually."

It's a real life action movie.