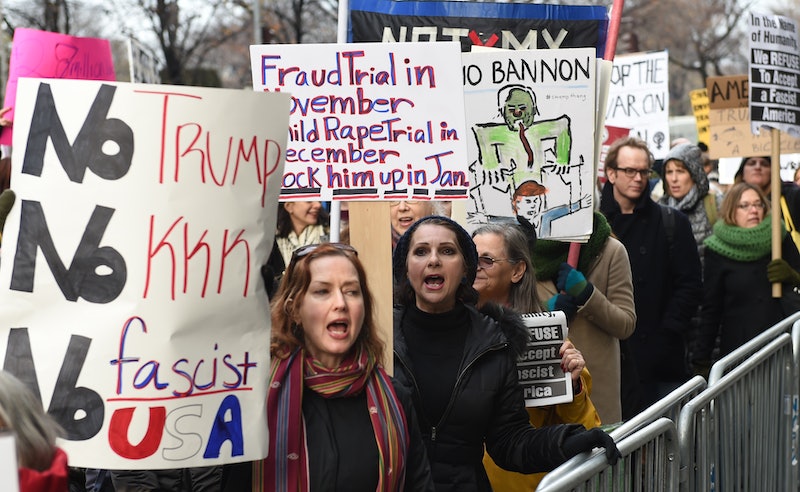 After some initial planning hiccups, the Jan. 21 march is slated to be the biggest organized inauguration protest. In fact, according to the Guardian, the march in D.C. is expected to be one of the biggest demonstrations in American history, not to mention the 281 sister marches popping up across the world (shoutout to the Kolkata march). Celebrities are adding their weight to the D.C. march, which organizers hoped would draw even more people to participate. By all accounts, the march is shaping up to be a success.

But, of course, Twitter is trying to squash any enthusiasm about the march by tearing down the women who will participate. Shots about killing the unborn, remarks about appearance, tired sexist tropes about women's driving skills they were all there in full force. There also seems to be a fair amount of women weighing in on the hashtag, making exhausting jabs at liberal feminism and taking time to apologize to the "psychos," who are clearly in the minority. It's disheartening, to say the least.

But the hashtag also shows exactly why we need this march — because people proudly stand behind hateful, sexist comments. There are, apparently, a fair number of people who believe that pushing for women's rights is a joke, something to make fun of, and definitely not something to take seriously.

The U.S. just elected a man who bragged about sexual assault to the White House, a man who has no problem publicly calling a woman names or insulting their appearance. If there is any time that we absolutely need women's rights to be near the forefront of American consciousness, it's right now.

Despite the naysayers, it's hard to deny that people will be paying attention to the Women's March on Washington. The goal is to make it clear to Donald Trump in his first full day as president that women will not tolerate his sexism. But it's also to let the world know the same. And no matter if you disagree with the march, it's still impossible to ignore.