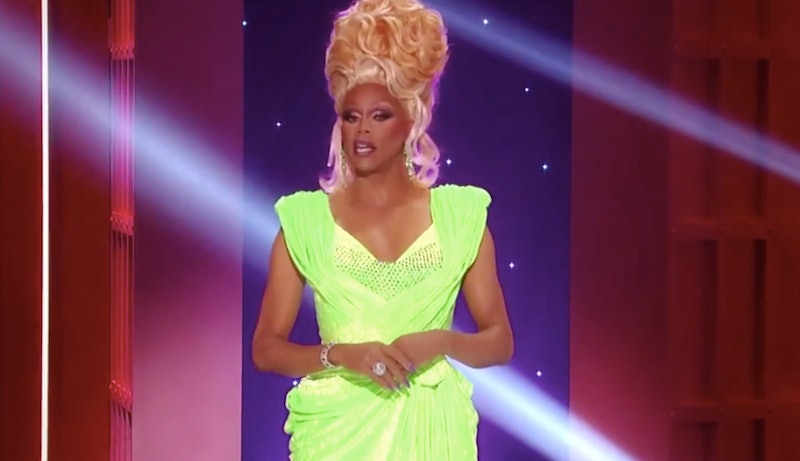 To end an "eleven-gendary" season of Drag Race, RuPaul delivered a poignant monologue in the Season 11 finale that reminded everyone how and why he came stand on stage among so many other stunning queens. From the Orpheum Theater in downtown Los Angeles, wearing a blinding neon gown and beat to the gods, Ru paid homage to over a decade Drag Race, its growing worldwide impact, and the ongoing queer rights movement. And with June 1 mere days away, it was the perfect start to pride month.

Ru started by thanking the fans of the show for fueling the Drag Race empire and helping it grow into what it is today. "Because of you, our little drag show has become a cultural phenomenon," he said. "Because of you, 140 Ru girls are spreading their charisma, uniqueness, nervem and talent for all the world to see. And because of you, a TV show of queer people, by queer people, and for queer people has won nine Emmy awards." The crowd cheered. "Everybody say love," he sang. The audience echoed joyously.

After a commercial break, Ru gave viewers a little queer history lesson. He reminded them that just 50 years ago — that's within Ru's lifetime, he's 58 — it was illegal to congregate at a gay bar. "You could go to jail, lose your job, or worse," he said. He went on to describe the Stonewall Inn riots as the turning point of the queer rights revolution.

On June 28, 1969, the police conducted one of their regular violent raids of the Stonewall Inn, a gay bar in New York City. "But this time, the queers of the bar fought back," Ru proclaimed. According to the History channel, that resistance — which included multiple people barricading themselves inside the bar and starting a fire — led to six days of protests outside the establishment and around the city, and more aggression between police and activists. After it all ended, the LGBTQ+ community knew it would never be the same.

As the 50th anniversary of this cornerstone approaches (again, during pride month), New York City officials announced the establishment of a monument honoring Sylvia Rivera and Marsha P. Johnson, two LGBTQ+ activists and pioneers of the Stonewall riots. According to the Associated Press, the monument will be erected in Greenwich Village, just a block away from where it all began. Johnson died in 1992 and Rivera in 2002.

Narrating a slideshow of photos from that night and other revolutionary events — good and bad — including acknowledgement of President Trump's transgender military ban, RuPaul made sure Rivera, Johnson, and their peers were recognized. "Through the decades, in the face of hatred, activists raised their voices and spilled their blood," he said. "So that you could live with pride, love who you love, and yes, even watch RuPaul's Drag Race at your favorite gay bar."

He also encouraged viewers to get involved, and to vote in upcoming political elections. "So when someone tells you to vote, don't roll your eyes. We can't stop fighting until everyone understands that LGBTQ rights are human rights," he said. "Can I get an amen?"

And the crowd said, "Amen."

More like this
Jinkx Monsoon Is About To Get Real Sketchy
By Sam Ramsden
The 'Bachelor In Paradise' Schedule Shifts To 4 Hours Every Week After The Season 8 Premiere
By Brad Witter
The New Bachelor Will Be Announced Next Week & Here Are The Top Contenders
By Grace Wehniainen
Are Brandon & Serene Still Together After 'Bachelor In Paradise'?
By Kadin Burnett
Get Even More From Bustle — Sign Up For The Newsletter