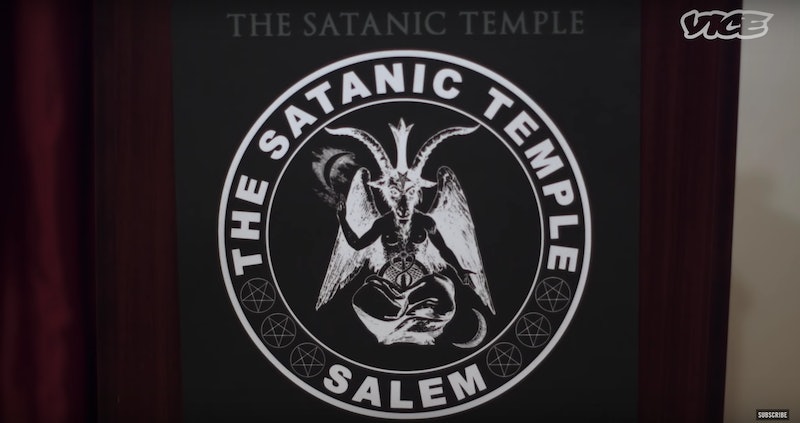 The IRS has ruled that the Satanic Temple is a tax-exempt religion, the controversial church announced on Wednesday. The decision means that the Satanic Temple, which has engaged in activism against anti-gay laws and restrictions on abortion, will be afforded the same legal protections enjoyed by other major religions in the United States.

"We are pleased to announce that, for the very [first] time in history, a satanic organization has been recognized by the United States federal government as being a church," the Satanic Temple wrote on Instagram. "The Satanic Temple recently received notice from the IRS affirming our status."

According to Rolling Stone, the politically-engaged temple had previously decided not to seek tax-exempt status, but changed its stance after President Trump signed signed an executive order in 2017 aimed at protection "religious liberty" in the United States.

"As ‘the religious’ are increasingly gaining ground as a privileged class, we must ensure that this privilege is available to all, and that superstition doesn’t gain exclusive rights over non-theistic religions or non-belief," Church President Lucien Graves wrote in the temple's official newsletter, according to Rolling Stone. "Atheistic and secular non-profits, advancing a distinct religious opinion and/or opinion upon religion, are themselves rightful beneficiaries of religious tax exemption as well."

Contrary to what its name might suggest, members of the Satanic temple do not worship Satan, several adherents told Bustle in 2017. Rather, the church is an atheistic organization that aims to "encourage benevolence and empathy among all people, reject tyrannical authority, advocate practical common sense and justice, and be directed by the human conscience to undertake noble pursuits guided by the individual will," as its website explains.

The church has often challenged restrictive abortion laws, as one of the its Seven Tenets states that "one’s body is inviolable, subject to one’s own will alone." In 2015, the church sued Missouri over a law that, according to Pacific Standard, was imposing mandatory ultrasounds on women seeking abortions. As a direct result of the church's lawsuit, the state was forced to acknowledge in front of the Supreme Court that the law in question didn't actually require mandatory ultrasounds. The Satanic Temple has also held counter-protests in support of abortion rights, as Metro Times reported in 2015.

In other instances, the church has protested against the lack of legal protections for LGBTQ Americans, placed Satanic displays in state capitols in accordance with First Amendment laws, and offered to safely escort Muslim Americans who, in light of rising Islamophobia in the United States, feared for their safety.

The IRS' designation means that, as an organization, the Satanic Temple will generally be exempt from local, state, federal and property taxes. In addition, the agency will have to clear additional hurdles if it wishes to audit the organization.

The temple wrote on Instagram that the IRS' decision "will help make sure the Satanic Temple has the same access to public spaces as other religious organizations, affirm our standing in court when battling religious discrimination, and enable us to apply for faith-based religious grants."