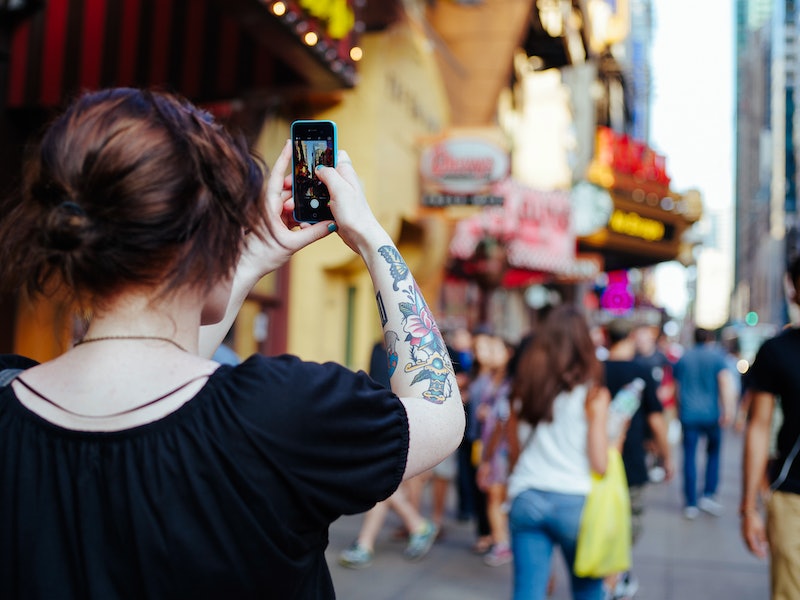 I’ll admit that I am often one of those people who can be found moaning about how feeling like we need to post every little detail about our lives on social media has a habit of actually disengaging us from said lives — but I might need to change my tune, because it turns out that there’s a scientific case to be made for Instagramming your life. New research published in the journal Psychological Science has found that taking photos can help you better remember certain life experiences. The jury’s still out on whether this is a recently-developed phenomenon we can chalk up to the rapid advancement of technology or whether we’ve always been this way — but either way, it’s proverbial food for thought if you’re a social media enthusiast. (Or even if you're not.)

Interestingly, these results are counter to what a lot of other research has previously found. There’s ample evidence to suggest that the ready ability to do things like take pictures or look up things on the internet— both of which are activities we didn’t tend to do quite as regularly as we do now before the advent of smartphones — might actually hurt our memories A 2013 study out of Fairfield University, for example, found that when people took pictures of objects, they had a harder time remembering them. As study author Linda Henkel put it, “People just pull out their cameras. They just don’t pay attention to what they’re even looking at, like just capturing the photo is more important than actually being there.”

Meanwhile, a 2015 study conducted by Kaspersky Lab, a software security group, found that an awful lot of people tend to suffer from something called “digital amnesia” — we’re not great at remembering information we usually rely on our phones for now (like phone numbers — and, I mean, truth: The only phone numbers I know by heart at this point are my own and my childhood landline), and we both tend to look up information online instead of trying to remember it on our own and forget whatever we’ve looked up in short order after we’re done with it.

However, as Science Daily put it, the researchers of the current study “hypothesized that this offloading effect may hold for factual information, but might not apply when it does to the experiences we deliberately choose to photograph.” The idea is that the reason we take photos in the first place is because we want to remember those experiences — so, the question then becomes, does doing so actually help our memories? Does it shape them, or reshape them — that is, does taking a photo of something affect how we remember it? What happens if we take photos, but then never look at them again? Fascinating stuff.

To explore these questions, the researchers conducted a variety of experiments examining how our photo-taking behavior affects our memories. In one experiment, 294 participants toured a museum exhibit. All the participants listened to an audio guide as they walked through the exhibit, but only some of the participants were also allowed to keep their phones on them. Those who had phones were told they could take as many pictures as they liked; they were also instructed to take at least 10 photos (so, there were no instances in which a participant had the ability to take photos, but did not). Then, after they were done looking at the exhibit, they took a quiz assessing how much of it they remembered. Those who took photos didn’t remember as much information from the audio guide as those who didn’t — but, they did remember more of the objects they had seen in the exhibit.

In a second experiment, participants toured not a physical museum exhibit, but a digital one: The researchers created a virtual art gallery and asked some participants to take pictures of what they saw in it with an on-screen camera. Again, the participants who had the ability to take pictures remembered less of the audio information, but more the visual information. Further experiments presented variations on these first two experiments, with conditions such as participants being told their photos would be deleted later or being instructed to take “mental photos” — and in each case, participants who took photos had a harder time remembering what they’d heard, but an easier time remembering what they’d seen.

Wrote the researchers according to Science Daily, “These findings suggest that having a camera changes how people approach an experience in a fundamental way. Even when people don’t take a photo of a particular object, like a sculpture, but have a camera with them and the intention to take photos, they remember that sculpture better than people who did not have a camera with them.”

So, how does Instagram fit into the proverbial picture? (Sorry not sorry.) Well, consider this findings in conjunction with a study out of Cornell University published in 2016 that found that posting about experiences on social media helps us remember those experiences better. For the study, participants kept a diary tracking both things they had experienced during the week and whether or not they posted about those experiences online. They were also asked to rate their life experiences with regards to how important they were and how emotionally intense they were. Then, at the conclusion of each week, the participants were quizzed on how much they remembered happening.

Independent of the importance or emotional intensity of each experience, participants remembered more about them if they also posted about them online. Said lead researcher Qi Wang in a press release, “If people want to remember personal experiences, the best way is to put them online.” The study also made the observation that“the process of writing about one’s experiences in the public sphere, often sustained by social feedback, may allow people to reflect on the experiences and their personal relevance.”

So: If taking photos can improve our memories of certain things, and posting on social media can as well, then taken together, it’s possible that Instagramming your life might help you better recall the experiences you’ve had.

Of course, there are other things to take into consideration, too; we tend to curate our lives for social media, showing only the best of the best, which can have some negative effects on us, too. (FOMO is real, y’all.) But when it comes to feeling engaged in your own life, everyone has different things that work for them — so if posting online about your fabulous brunch is what works for you, then go forth. There’s no shame in doing it for the ‘gram.

More like this
Why Everyone Is "Soft Tagging" Friends On Instagram Right Now
By Alexis Morillo
Here's How To Get Your iPhone To Update Automatically Forever
By Emma Carey
Why TikTok Is Flooded With Controversial Videos About "Pick Me Girls"
By Courtney Young
19 Latinx Therapists & Mental Health Experts To Follow On Instagram
By Kaitlyn Wylde, Naydeline Mejia and Lexi Inks
Get Even More From Bustle — Sign Up For The Newsletter