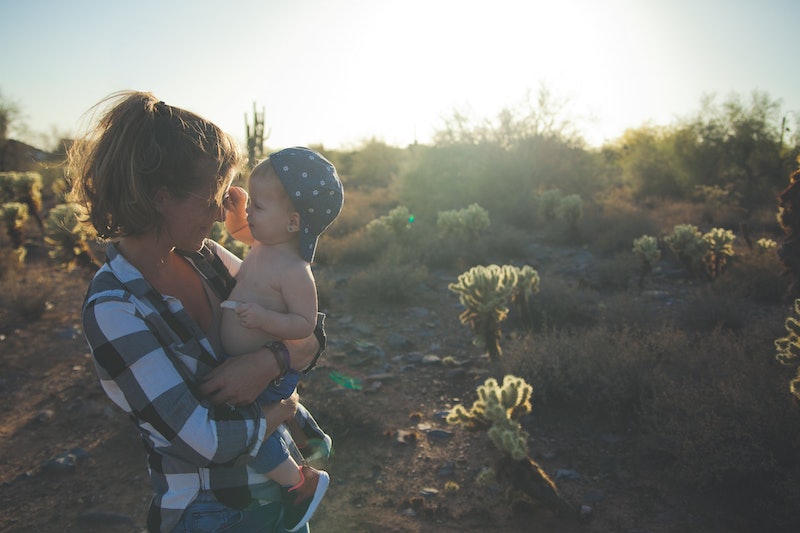 Sometimes, we're so used to performing the same actions in the same way that we don't even realize we've developed a routine. Take, for instance, the way you hold a baby. If you're like most women, you automatically hoist a child up to rest on your left side. In fact, this predisposition to favor the left side, appropriately known as left-cradling bias, is so common that it's been documented in other mammals as well. Finally, after years of leaving scientists baffled, researchers say they have figured out why so many mothers have a left-cradling bias: It allows them to analyze information with the right side of their brain.

Previous research has shown that 70 to 85 percent of women (and even young girls) prefer to hold infants on the left side. According to a study published in Nature Ecology & Evolution this year, this bias isn't only seen in mothers; their young also tend to approach from that side. In the study, researchers observed infant-mother pairs in 11 different species of wild mammals, including orca whales and kangaroos. Whenever a baby approached its mother from behind, researchers made a note of which side it aimed for. After analyzing more than 11,000 such interactions, the study found that infants of all species were far more likely to keep to their mother's left.

This fits with a previous study showing that human children do the same thing. (Interestingly enough, research has indicated that men only demonstrate this tendency after they become fathers.) So what gives?

According to the Nature Ecology & Evolution study, this pattern was so consistent that it may have something to do with "right hemisphere dominance for social processing." As you might remember from biology class, information gathered from the left side of your body — touches, sights, and so on — is processed in the right side of the brain. Most scientists agree that this side is where we analyze social and emotional signals. Therefore, it's possible that left-side cradling directs information about the infant's physical and emotional state to the right hemisphere. Basically, the position helps you better understand a baby's needs.

A 2004 study also noted that the right side of the brain is associated with sustained attention, so cradling a child on the left side may help the mother pay attention for long periods of time. In the end, all this should strengthen the emotional bond between the child and whoever is holding them.

So if you're a woman or father who spends plenty of time around children, your left side is probably much stronger than your right. Next time someone challenges you to an arm-wrestling contest, keep that in mind.