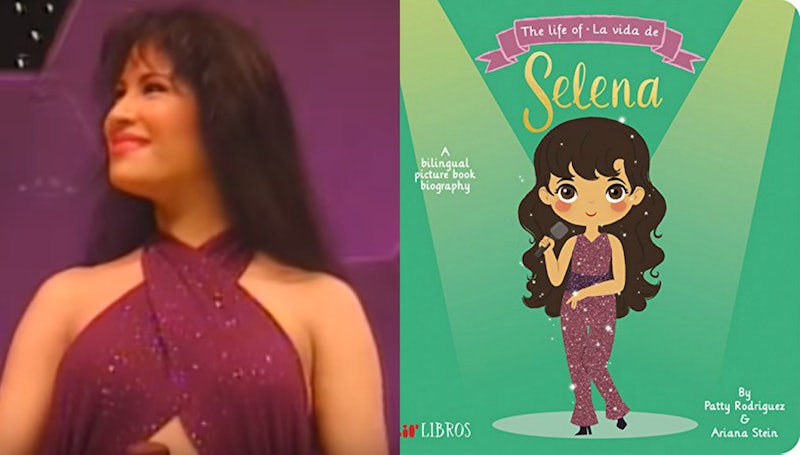 It is the rare Latinx who does not consider the late Tejano superstar singer and clothing designer Selena Quintanilla-Perez (more commonly known as Selena) to a be a huge role model. It's certainly been the case for me since I was a child, and I am thrilled that Patty Rodriguez and Ariana Stein's new board book La Vida de Selena will be giving today's youth the opportunity to learn more about the inspiring star's life. And despite not hitting shelves until March 2018 the book has already skyrocketed to number one on three different Amazon charts — including the Libros en Español list, where Harry Potter and the Sorcerer's Stone previously reigned at number one.

Since she first burst onto the scene in the late '80s, Selena has become synonymous with the American Dream. An Mexican-American girl from a low-income family, she and her band struggled for years to break into the male-dominated Tex-Mex music scene, only to become the biggest and most beloved artist in the genre by the early '90s. Before her untimely death in 1995, she was about to crossover into the English music scene and make her mark on pop culture at large. Although Selena never got to see that dream realized, it has definitely come true.

Because over the past couple of years in particular, Selena's popularity has seen huge growth outside the Latinx sphere. In 2016 and 2017 alone there has been an incredibly popular limited edition MAC makeup line made in her name; two different Madame Tussaud's wax figures of her are now on display; she has received a long overdue star on the Hollywood Walk of Fame; high profile celebrities like Demi Lovato and Kim Kardashian have paid homage by dressing up as her for Halloween; and now, there's a children's book about her life.

La Vida de Selena or The Life of Selena is a bilingual picture book biography of the star that will be joining the Lil' Libros family which already includes books about artist Frida Kahlo and legendary salsa singer Celia Cruz. Sharing facts about Selena including her favorite food (pizza) and the fact that her family and fans were the most important people in the world to her, little ones will be introduced to the legendary star with sweet tidbits that will be sure to get them excited to know more about Selena's life and impact.

Best yet, it was author Patty Rodriguez who started the fan petition that finally got MAC to take notice and create the Selena makeup line, so we know that the book will be made with love and Latinx pride, the only way to really honor the legacy that Selena has left behind. I for one, already have La Vida de Selena on my pre-orders list. I might not quite be in the target age-group but, you know, Anything for Selenas.