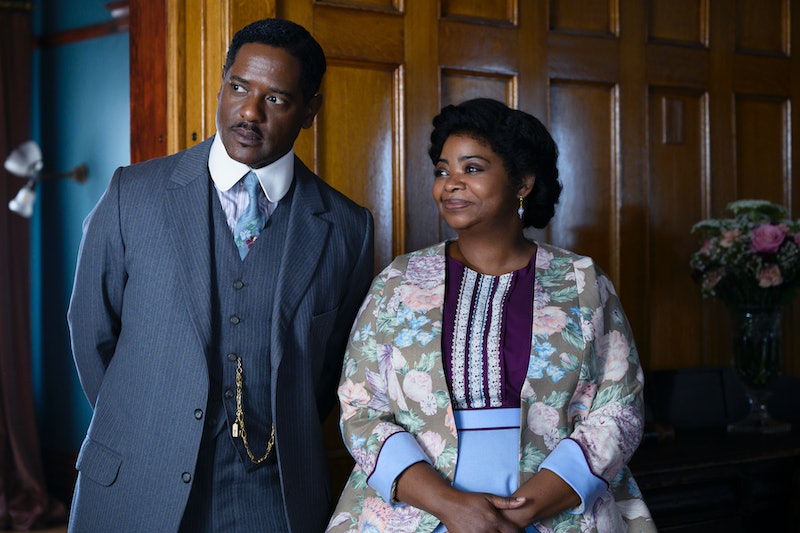 Netflix is taking a break from supernatural teen shows to tell the true story of a woman broke boundaries and redefined beauty for black women everywhere by becoming the wealthiest self-made woman in America. On Tuesday, Feb. 25, Netflix released the first trailer for Self-Made: Inspired by the Life of Madam C.J. Walker, which chronicles the life and career of the hair care entrepreneur. "It's time to tell my story," Octavia Spencer — who plays Walker in the four-part series — says at the beginning of the trailer.

Self-Made aims to do just that, showing how Walker went from working in a laundry to building an entire empire in the late 1800s and early 1900s, when America was still recovering from the Civil War. Inspired by her own hair loss, Walker attempted to build a career for herself as a saleswoman before eventually formulating and selling her own line of hair care products, empowering other women of color to become saleswomen and build careers of their own.

"Sisters, let's talk about hair," Spencer's Walker says to a crowd of black women in the clip, revving up to give a sales pitch. "They put us down, tell us we're ugly, make us feel ugly," she tells the crowd, before adding adding later in the clip that "hair is beauty. Hair is power."

That message is underlined in the trailer by contrasting Walker's confidence and salesmanship with the way she's treated by her biggest business rival, Addie Munroe (Carmen Ejogo). "Colored women will do anything to look like me, even if deep down they know they can't," Addie says to Walker, which is the direct opposite to the way that Madam C.J. Walker marketed their products.

It's not just colorism and classism that Walker is fighting against in her quest to become a successful business woman; she's also a woman in a "man's world," which causes some friction between herself and her husband, C.J. Walker (Blair Underwood). "We done all made sacrifices," he tells her at one point, when it seems like her business might not be taking off. "You're gonna do what's best for this family."

Still, she doesn't let that stop her: "I didn't come here to make sandwiches. I came here to do business," she says in one of the trailer's best lines.

According to Netflix, Self-Made is based on the book On Her Own Ground: The Life and Times of Madam C. J. Walker by Walker's great-granddaughter, A’Lelia Bundles, and is "the first time" that the entrepreneur's story has been told on the big or small screen. "Against all odds, Walker overcame post-slavery racial and gender biases, personal betrayals, and business rivalries to build a ground-breaking brand that revolutionized black haircare, as she simultaneously fought for social change," the network explained in the official synopsis.

Aspiring business women everywhere can be inspired by Walker's ability to redefine beauty standards while building an empire when Self-Made premieres on Netflix on March 20.

More like this
Netflix Reveals First Look At Wednesday In The 'Addams Family' Spinoff Series
By Bustle Editors
What Does Nancy Jo Sales Think Of 'The Real Bling Ring'?
By The Editors
Netflix's 'Bling Empire' Season 3 Trailer Includes A 'Selling Sunset' Cameo
By Kadin Burnett and Sam Ramsden
Here's When 'The Crown' Season 5 Will Premiere — And What To Expect
By Bustle Editors
Get Even More From Bustle — Sign Up For The Newsletter