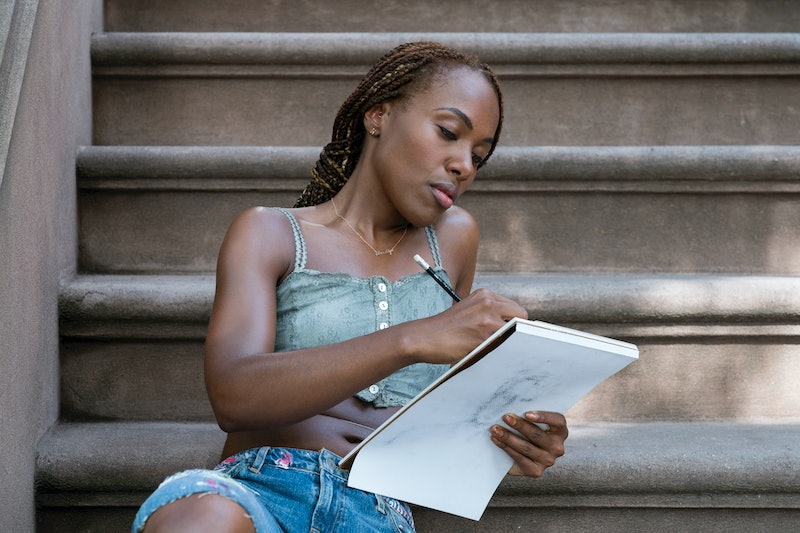 Based on a 1986 Spike Lee joint, She's Gotta Have It Season 1 followed Nola Darling (DeWanda Wise) as an artist juggling three guys: Mars Blackmon (Anthony Ramos), Jamie Overstreet (Lyriq Bent), and Greer Childs (Cleo Anthony). However, for the second iteration of Lee's TV remake — out Friday, May 24 on Netflix — Nola is now dating Opal Gilstrap (Ilfenesh Hadera) and focusing more on her art than her love interests. Furthermore, fans will be happy to know that the She's Gotta Have It Season 2 soundtrack is already streaming on Spotify, so they can listen to the show's music whenever they like.

With 46 songs and nearly 3.5 hours of music, there's plenty to unpack and repeat on this lengthy playlist. The album features plenty of recognizable artists, like Erykah Badu singing "Back in the Day" and Frank Ocean with "Self Control" from his 2016 album Blonde. There are also more classic artists like Madonna, Stevie Wonder's "Never Dreamed You'd Leave In Summer," The Jones Girls, and The Blackbyrds, among others. However, there are also plenty of lesser-known, up-and-coming artists that fans can either become reacquainted with or discover for the first time. Here are some of the most exciting musical prospects from She's Gotta Have It's Season 2 tracklist.

This artist opens the playlist with her upbeat track "You Should Know That," which also plays over the show's Season 2 trailer. Sista Zock only has one album out — 2016's Zock Solid: Where the Stem Meets the Root — so perhaps being featured in She's Gotta Have It will help her gain some traction. Her personal website explains that Sista Zock lives in Harlem and grew up in Mount Vernon, New York. Furthermore, the artist is described as having a "unique sound," which "straddles the fence between spoken word -song, and Jazz-Hip-Hop."

To be clear, Ndegeocello has been making music for quite some time now, but she may not be a household name. The musician was born in Berlin (her father was in the military) and raised in Washington, D.C., per the Chicago Tribune. Ndegeocello is both a singer and bassist, garnering 10 Grammy nominations over the past 25 years — the latest in the Best Urban Contemporary Album category for her 2018 album, Ventriloquism. And the artist performs lots of covers, including "Waterfalls" by TLC and Nina Simone's "Black Is the Color of My True Love's Hair," among others.

Boogaloo emerged out of 1960s Spanish Harlem, according to Spanglish Fly's website, and the infectious genre has seen a revival through this 12-piece band. The She's Gotta Have It soundtrack features two songs by this New York-based group — "New York Rules" featuring Joe Bataan, and "Coco Helado." As the band founder, DJ Jonny Semi-Colon, told NPR, "We're showing that boogaloo is a flexible genre, not just Latin and soul music. It's jazz and hip-hop and other things, with the complexities of Afro-Cuban rhythms."

According to her Spotify bio, Shawndrell's song "Save Yourself" was also featured in She's Gotta Have It Season 1. The artist released her album Dream of Shawndrell in 2013 and has followed it up with singles like "What Love Is," "Tasty," and "Whole Check." And her musical influences include Jill Scott, P!nk, and Aretha Franklin, per the singer's Spotify bio.

This artist only has one song on Spotify, which is the one in the She's Gotta Have It soundtrack. However, Ink also appears to feature on several tracks by Houston rapper Trae Tha Truth, including "Dayz I Prayed," "Ghetto" alongside T.I. and Wyclef Jean, and "I Ain't Mad At Ya," among others.

With a 2017 album, 11:11, and singles like "In Women We Trust," "Boys Like You," and "Love From NGC 7318," Tanerélle is about to blow up. And while her genre is perhaps most closely aligned with R&B and has a voice eerily similar to Lana Del Rey, the artist told i-D UK, "I listen to EVERYTHING. It's one of the reasons why it's so hard to smack a genre on my music." Later in the same interview, she said, "I want my music to make people feel, whatever that feeling may be. As long as it's therapeutic and leaves them on top of the world.... I always say this, but I want my music to incite people to heal, feel, and celebrate."

So with a playlist that's 46 songs long, you're bound to find your new favorite artist on She's Gotta Have It's Season 2 soundtrack.