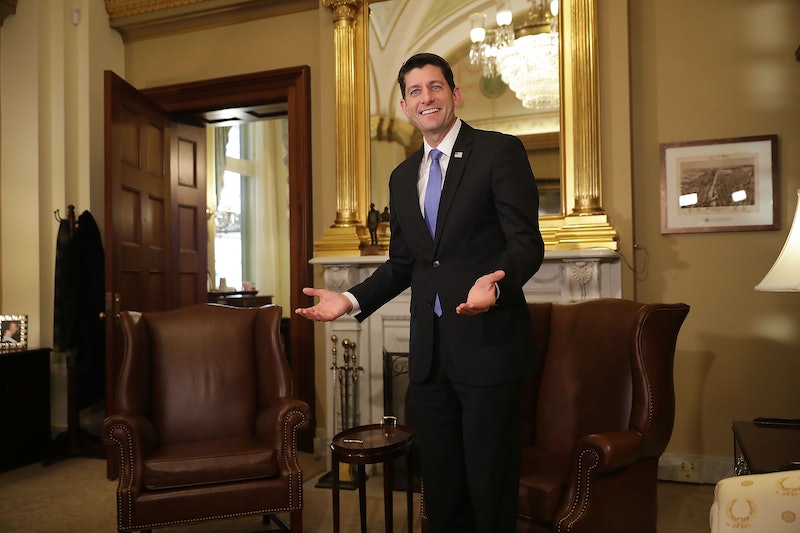 The latest affront to reproductive rights, HR-7, could prevent all insurance companies from funding abortions. That's already a reality in 10 conservative states, but Congress is trying now to prevent all Americans from affordable abortion access. Alone, the concept of the bill is crushing, because it's pretty much a non-issue that Congress is still spending time on just to regulate women's bodies. The scariest thing about HR-7 is that doesn't exist by itself — it's part of a growing trend of legal oppression of women that feels downright Draconian to many of the millions who are being stripped of their power in society.

If HR-7 does pass through the Senate and get signed into law, there's no way Republicans are going to stop there. Several high-profile GOPers have said that they want abortion fully outlawed, which would make the United States one of only seven countries in the world that does not allow abortion under any circumstance. Even if they don't push for full prohibition, Republicans in Congress and statehouses across the country will continue, and likely accelerate, their trend of passing increasingly restrictive TRAP laws to make abortion less accessible to the people who need it.

This is all, of course, made possible by Donald Trump, whose occasional far-right statements on abortion inspired Republicans to pursue bolder and stricter anti-abortion measures. One Ohio lawmaker told reporters that he and his colleagues were encouraged to reintroduce a bill that would ban abortion after the fetus's heartbeat could be detected (as early as six weeks and before many people even know they're pregnant) due to the changing political climate. "A new President, new Supreme Court justice appointees change the dynamic, and that there was a consensus in our caucus to move forward," Ohio Senate President Keith Faber told reporters as his reasoning for reintroducing the previously dead bill to the state legislature. Although Governor John Kasich vetoed that bill citing constitutional concerns, he did sign another one into law prohibiting abortion after 20 weeks, without provisions for rape, incest, or fetal anomalies.

Laws like the "heartbeat bill" could become a reality if Trump is able to turn the Supreme Court strongly pro-life, as he's also announced he intends to do. Though only one SCOTUS seat is open right now, Trump could appoint as many as three judges in his term, which could dynamically shift the court's stance on abortion. Some of his constituents still aren't satisfied, however — anti-abortion activists are actually pushing for even more extreme appointments than the judges on Trump's current shortlist. If a cohesive far-right-wing group does oversee the court, they would not only have the possibility to overturn Roe v. Wade, but potentially make unprecedented rulings on punishments for women who have abortions privately.

All of this is utterly terrifying to anyone facing the remote possibility of unintended pregnancy right now, not in the least because this world doesn't look like the best place to raise a child right now. But letting the fear become debilitating isn't helpful to anyone, especially the next generation. Speaking out about your feelings to friends and family, calling Congressional representatives, and donating to organizations like the ACLU and Planned Parenthood may not ultimately mitigate the fear much. But doing something is always better than not doing something. Seeking empowerment is the best way to avoid falling into helplessness, so fight back whenever and however you can.