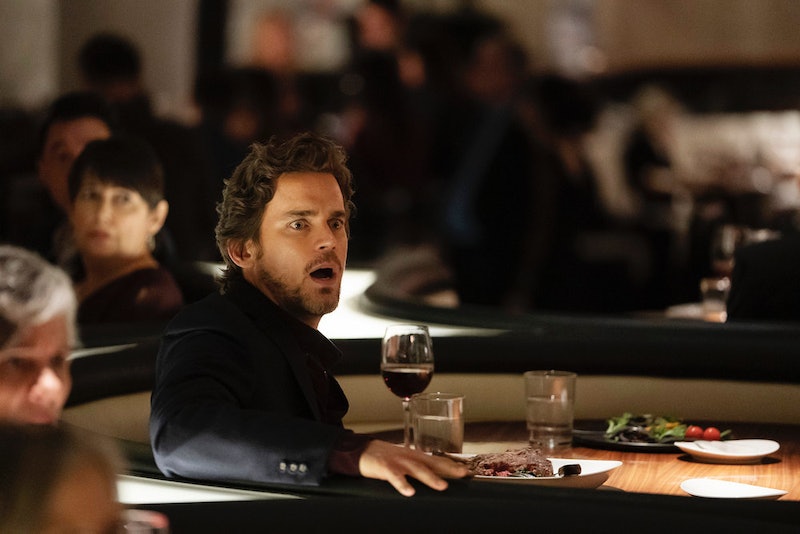 Spoilers ahead for The Sinner Season 3 Episode 3. There's no doubt that Jamie let his old college friend Nick die after a car crash on The Sinner. But it's up to Detective Harry Ambrose to figure out what Matt Bomer and Chris Messina's characters were up to in college that led to this death. Following the third episode, there is finally enough info to come up with some theories about The Sinner Season 3. With the birth of Jamie's baby and Ambrose visiting Jamie and Nick's old college professor, The Sinner has provided some significant clues into Jamie's philosophical mindset, which seems to be the key to the entire season.

Ambrose took a trip to Jamie and Nick's college after he spotted the word "Übermensch" carved into Jamie's dorm room furniture in an old photo. Their old philosophy professor explains that the concept of the Übermensch is the highest form of human, who challenges themself to "create his own morality." In doing so, "You conquer fear, live at a higher level than common man. Discover the truth of existence."

Jamie is desperately searching for a meaning in life and Nick appeared to be the only person who understood (and encouraged) the dangerous levels he would go to in order to pursue it. But what were those dangerous levels? Here are a few theories on the high-risk activities that these buds were up to in college.

They Killed Someone & Were Planning To Kill Again

Jamie's college roommate told Ambrose how Jamie came back to the dorm after hanging with Nick covered in mud and blood. Perhaps the pair had murdered someone and Jamie called Nick up to do it again ahead of his child's birth. They were headed to Sonya's home and Jamie dug a grave on her property, so she was most likely their intended victim. Why they would want to kill her is still a mystery, although her artwork focused on the vulnerability of men might have either fascinated or infuriated them. Their desire to murder could connect to their pursuit of the Übermensch since killing someone would give them the god-like power of life and death and would certainly be the creation of their own morality.

They Think They Reach A Higher Plane When They Feel Pain

Jamie has engaged in several high-risk activities — standing on a roof's edge of a skyscraper, almost stepping out into traffic. Yet, he doesn't seem like he wants to die since he expressed concern about bringing a child into this world when we don't know what happens when we die. Rather than die, he seems to be more interested in being close to death and experiencing pain. He quoted Nick to the doctor at the mental health facility, saying he'd never act on his suicidal thoughts because he'd be "avoiding pain and pain is the gateway." Perhaps, Jamie believes if he can see or feel something that's in proximity to death, he can somehow transcend common humankind and become the Übermensch.

They Buried Each Other Alive

Jamie has been seeing flashbacks of digging the grave on Sonya's property and in them, a tube is visible. If he and Nick were consumed with getting close to death, burying each other alive with access to oxygen through a tube might be the ultimate way to achieve that (like their version of Flatliners). They probably experienced a high from this dangerous activity since Jamie's college roommate noted how he seemed "almost too alive" after he found him covered in mud in their dorm. This dangerous hobby might also explain some of the visions Jamie has had of Nick since cerebral hypoxia (decrease of oxygen to the brain) can cause hallucinations.

Nick Believed Jamie Could Be The Übermensch

The Übermensch doesn't actually exist in Nietzsche's work and instead if something for humankind to pursue. Nick seems to have been more passionate about this pursuit, but perhaps he got Jamie involved because he believed Jamie was more capable of attaining this higher power of being than he was. Maybe that's why Nick seemed rather OK with the fact that Jamie allowed him to die after the car crash rather than call an ambulance. He may have seen it as another act that allowed Jamie to become closer to being his own god.

With five more episodes to go, The Sinner Season 3 will surely have more twists and more philosophical quandaries. But at least Ambrose is getting closer to understanding Jamie's Übermensch complex and cracking the case, thanks to a little philosophy 101.