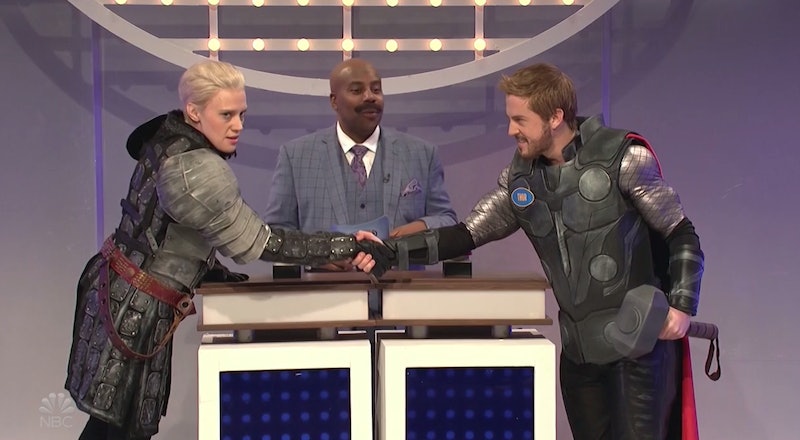 The spring of 2019 will go down as the season that two of the decade's defining pieces of media, Game of Thrones and the Avengers franchise, came to an end. Saturday Night Live celebrated the occasion by pitting the two against each other for a round of Family Feud: Game of Thrones vs, Avengers for the cold open and letting the cast try out some of their impressions from the franchises.

The sketch featured Kenan Thompson reprising his frequent role as Steve Harvey, trading barbs back and forth with the show's contestants. The Avengers side of the game was made up of Thor (played by Alex Moffat), Thanos (played by Beck Bennett in copious amounts of make-up and prosthetics), Okoye (Ego Nwodim), and Groot (Leslie Jones) who communicates by informing others that "Bitch, I'm Groot." Playing against them was Brienne of Tarth (Kate McKinnon, delivering the toothiest smile in Westeros), Tormund Giantsbane (Mikey Day), Melisandre (Cecily Strong), and a distant Bran (Kyle Mooney) — with a last-minute appearance from Arya (Melissa Villaseñor) saving the day just as she did in a recent GoT episode.

The competition quickly dissolves into gags and misunderstandings, but the sketch serves as a reminder of just how impactful these series are — so much so, in fact, that SNL opted to air the sketch as the cold open, instead of the standard practice of airing a political sketch. In a rare instance, the most important news story wasn't something in politics, but was instead the end of an era for fantasy and superhero media. If you haven't caught up with Avengers: Endgame or The Battle Of Winterfell, however, don't worry — the sketch manages to avert revealing any spoilers.

SNL will probably get the opportunity to make fun of these franchises again in the future, thanks to HBO's intent to produce Game of Thrones spin-offs in the future and the fact that the Marvel Cinematic Universe will continue on beyond Avengers: Endgame, but chances are that SNL only has a few weeks for the cast to show off their impressions of any Game of Thrones characters. Oddly enough, while the show utilized some GoT impressions that have a pretty short shelf life to them, the Avengers side of the Family Feud sketch primarily featured characters who will still be featured in future MCU films.

Thanos is the only character featured that is going to be returning to the MCU any times soon, so it seems like a missed opportunity for any of the show's cast to make an attempt at an impression of any of the characters that likely won't be returning for future installments of the franchise. Of course, it's possible that no one in the cast could do a serviceable impression of the MCU's recently deceased characters and that bringing out the likes of Okoye and Groot would be more entertaining than watching a performer deliver a subpar impression of a beloved character. While the show wasn't able to do an extensive parody, as they don't have the triple-digit cast it would take to properly satirize both series in their entirety, the Family Feud sketch was a perfect send-off to two franchises that have been a source of humor on SNL for a long time.