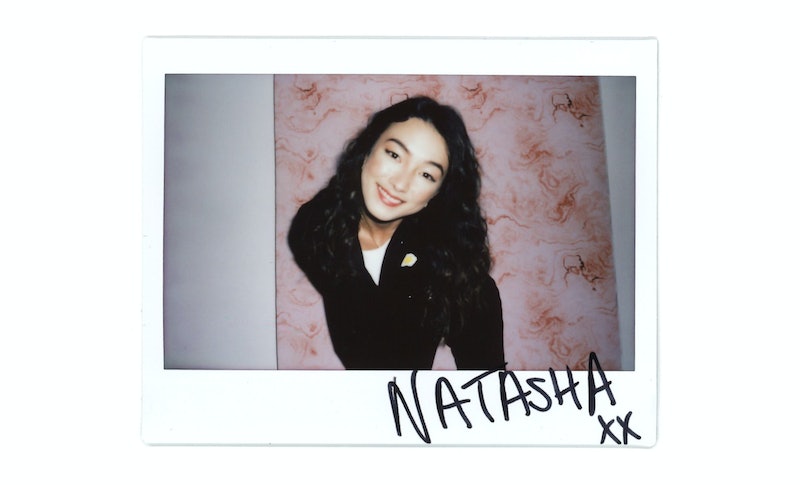 When celebrities hang out with Bustle writers, we want to give them the chance to leave their mark. Literally. So we hand them a pen, a piece of paper, a few questions, and ask them to get creative. This time, The Society star Natasha Liu Bordizzo is leaving her mark in the Bustle Booth.

There was almost a world in which Natasha Liu Bordizzo became a lawyer — a world in which she didn’t become an international model, act alongside Armie Hammer and Dev Patel, and land a supporting role on Netflix's YA thriller The Society. But, by a wild stroke of luck, that’s not the world we live in.

“I was really one of those picked up off the street,” Bordizzo tells Bustle. She was attending law school in Sydney, Australia, when her future manager stumbled across her Instagram and insisted Bordizzo try her hand at modeling and acting.

Her manager was right to be persistent; after her very first audition, Bordizzo landed a part in Crouching Tiger, Hidden Dragon: Sword of Destiny — not bad for someone who claims to have stage fright. She went on to act in Hotel Mumbai and The Greatest Showman, on top of modeling for brands like Chanel.

It’s tempting to assume from Bordizzo’s rapid success that the choice to leave school was easy. But in reality, as a minority woman (she’s Chinese-Italian) with no friends or family in the industry, the decision to abruptly leave her old life behind was fraught with anxiety. She was put on a plane three days after getting her first role, and arrived on the Crouching Tiger set to discover she was one of only a handful women on a set of 200 people. She leaned on costar Michelle Yeoh, who became a stabilizing force as Bordizzo’s life was changing forever.

“I needed that nurturing sort of energy from another female because it is a very male-dominated set a lot of the time,” she says. “That was really important for me to have as a young girl starting out in the industry.”

Working on The Society gave Bordizzo the supportive experience she craved, and she loved learning from the ensemble cast of young actors. The show is essentially a modern Lord of the Flies that tells the story of teenagers forced to rebuild society after their parents mysteriously vanish. Bordizzo plays Helena, a religious popular girl who becomes a voice of reason amid the show's increasing tension.

The role also gave her the chance to put her academic background to good use. Since Helena is a devout Christian who delivers sermons to her peers, Bordizzo extensively researched her character’s favorite biblical passages. “The hustle is real and the hustle requires highlighters and Gmail folders and Excel documents,” she laughs.

There may be another world in which Bordizzo is a lawyer with stage fright. But in this world, Bordizzo just moved to Los Angeles and is ready to hustle her way through Hollywood, hoping to eventually write and produce.

“It's all part of the bigger goal of wanting to create and be a woman behind the camera,” she says. “[I want to] have that piece of the pie and have a seat at the table.”

Check out her answers to our Bustle Booth questionnaire below.

More like this
On 'The Handmaid’s Tale,' Christine Ko Fights Back
By Gretchen Smail
Lauren Lyle Is Keeping The Contents Of Karen Pirie’s Bum Bag A Mystery
By El Hunt
'Grey's Anatomy's New Intern Got Advice From Dr. Bailey Herself
By Grace Wehniainen
UK Viewers Will Have To Wait To Watch The Handmaid’s Tale S5
By Maxine Harrison
Get Even More From Bustle — Sign Up For The Newsletter