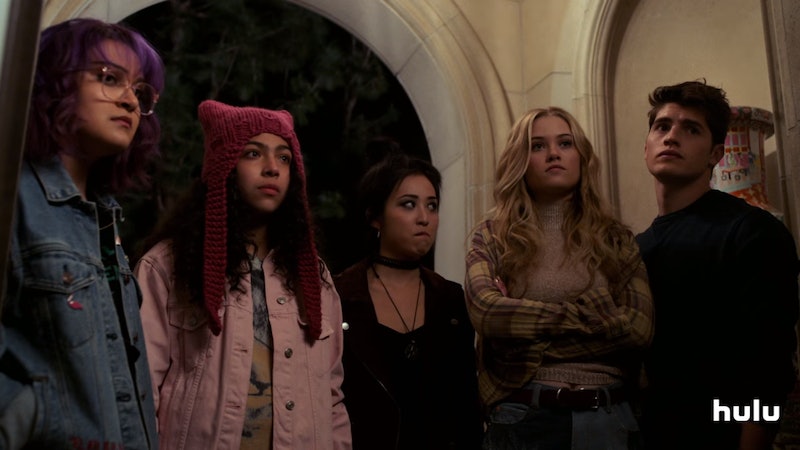 Prepare yourselves, Marvel fans, because the Runaways trailer has arrived, and it's brilliant. Even the song in the Marvel Runaways trailer sets the tone for the angst-filled journey of self-discovery the unlikely group of teen heroes are about to go on. Set to the tune of Mr. Little Jeans "Don't Run," the teaser introduces the diverse cast of soon-to-be teen heroes and their parents' dastardly side hobby.

Based on the comic book series written by Brian K. Vaughan, Hulu's Runaways follows six teens — Alex, Nico, Gert, Chase, Karolina, and Molly — who discover their parents are part of a group of supervillains known as the Pride. This news is upsetting enough for them to run away together and form a makeshift team in hopes of bringing down their parents. But nothing is ever that simple, especially when you add in the part where each one of these kids is struggling with defining themselves while also trying to reconcile their different personalities.

"Don't Run" is the perfect anthem for these characters. Lyrics like "No four-leaf clover's gonna save us / Gonna make us new," cuts to the heart of the teens' core dilemma: they're on their own, and facing an enemy that they can't help but love. There's no simple solution to their problem, and the only people they can rely on are each other.

Comic book readers know the Runaways team is special for more reasons than their young age. The show will be on one of TV's most diverse group of heroes ever. Not only is the cast racially diverse, you can expect the series to feature LGBT characters in prominent roles. While the trailer focuses in on the kids discovering the Pride in action, there are also hints at what's to come on a character level sprinkled throughout the teaser.

One of the best moments is when Karolina's powers are shown in action. "You don't have to hide who you really are," says one of the characters, and it's a pivotal moment. That line sums up the core philosophy of Runaways. More than anything else, it's a story about self-discovery and self-acceptance. But there's also an awesome dinosaur — which you can catch a glimpse of around the 1:03 mark.

Runaways is worth getting excited for because it's the rare superhero tale that has it all — diverse characters, heartfelt drama, and the fun, comic book action fans of the genre have come to expect. So far, it looks like Hulu is on the right track to bring the comic to life for a television audience.

Of course, it all comes down to the cast. While the team is largely made up of unknowns, the Pride is full of familiar faces who will add depth to the villainous parents of the teens. Buffy the Vampire Slayer's James Marsters, The Handmaid's Tale's Ever Carradine, Alias' Kevin Weisman, and The Wire's Ryan Sands are all on board as members of the Pride. Meanwhile, Rhenzy Feliz (Alex), Lyrica Okano (Nico), Virginia Gardner (Karolina), Ariela Barer (Gert), Gregg Sulkin (Chase), and Allegra Acosta (Molly) round out the younger cast.

Runaways is in excellent hands both in front of and behind the camera. In addition to its strong cast, the show hails from teen drama experts Josh Schwartz and Stephanie Savage, who created The O.C. and Gossip Girl. These two have been producing quality shows about young adulthood since 2003 — if anyone know how to balance humor, drama, and teenage emotions, it's these two.

From the flawless song choice to the perfect amount of hints at what's to come, the Runaways trailer is a winner for both fans of the series and those who are meeting the characters for the first time. Mark your calendars for Nov. 21, because you won't want to miss out on seeing this diverse superhero show when it lands on Hulu.

More like this
The First 'Percy Jackson & The Olympians' Teaser Comes With An Ominous Warning
By Grace Wehniainen
Hulu’s Mike Tyson Series Is Unlikely To Return For Season 2
By Brad Witter
Nicola Coughlan Shared A Lady Whistledown Excerpt From ‘Bridgerton’ Season 3
By Grace Wehniainen, Alyssa Lapid and Sam Ramsden
A New 'And Just Like That' Table Read Pic Confirms A Key Character's Return
By Jack Irvin and Grace Wehniainen
Get Even More From Bustle — Sign Up For The Newsletter