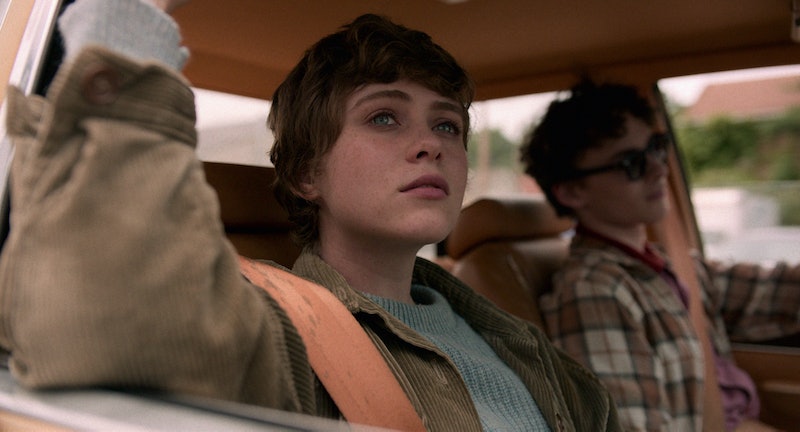 Spoilers ahead for I Am Not Okay with This Season 1. Stan (Wyatt Oleff) on I Am Not Okay With This feels like a teen out of a different time. He dresses like an 80-year-old grandpa who equally loves Jimmy Buffett and disco. He enjoys vinyl records, VHS tapes, and smoking weed. And he loves Bloodwitch, which is surprisingly a real band — though you'd be forgiven for never having heard of them. Syd (Sophia Lillis) hadn't either.

That being said, it seems like the Bloodwitch Stan is referring to isn't the same as the real band, which is a heavy metal group from New England. The band Stan listens to on the show sounds a bit more folk-y, and Tatyana Richaud is credited as its singer on IMDb. She wrote on Facebook that worked on the I Am Not Okay with This soundtrack with Graham Coxon, one of the founding members of British rock band Blur. Coxon also composed the score for both seasons of The End of the F***ing World — which, like I Am Not Okay With This, is based on a graphic novel by Charles Formsan. So if those old-timey guitar riffs sound familiar, that's why.

In addition to Coxon's fake Bloodwitch band, I Am Not Okay with This features a nostalgic mix of music befitting of Stan, including songs by The Kinks, Pixies, Karen Dalton, Prefab Sprout, Paul Young, and Rick Springfield. Coxon confirmed in a Reddit AMA that the official I Am Not Okay with This soundtrack will be released alongside the series premiere on Wednesday, Feb. 26. So break out your turntables and prepare to fall in love with both Bloodwitch and Stan.

More like this
If 'Entergalactic' Season 2 Happens, You Could Get A New Kid Cudi Album
By Kadin Burnett
Netflix Reveals First Look At Wednesday In The 'Addams Family' Spinoff Series
By Bustle Editors
What Does Nancy Jo Sales Think Of 'The Real Bling Ring'?
By The Editors
'Firefly Lane' Season 2 Will Be The Show's Last — But There's A Twist
By K.W. Colyard and Grace Wehniainen
Get Even More From Bustle — Sign Up For The Newsletter