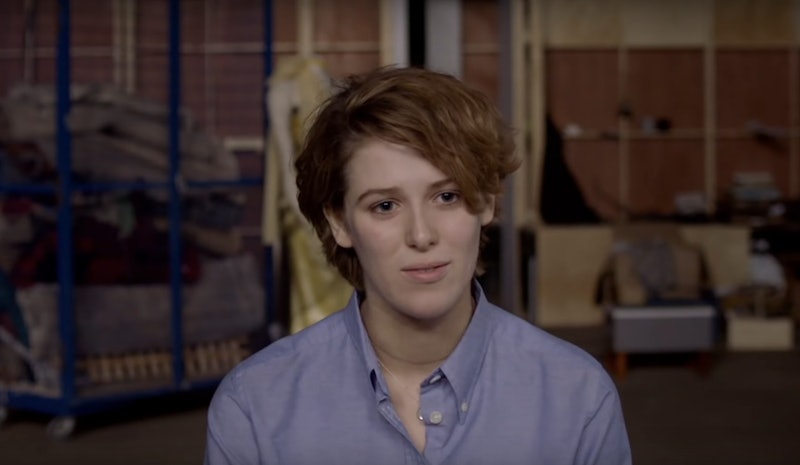 How would you cast the person to play you in a movie? You'd have to feel the actor could take on your personality, or perhaps think that they look like you. But, depending on the story being told, there would be other, more intimate factors to consider. This is something director Joanna Hogg had to confront for her fourth feature film The Souvenir, in theaters May 17. The movie is based on an intense relationship she had while in film school in her early 20s, so Hogg needed to entrust the actor playing her with personal details about her past. She also had to be able to see the person not so much as an actor, but as a director, like herself.

Hogg found this version of herself in Honor Swinton Byrne, the 21-year-old daughter of Tilda Swinton, who Hogg has known since the time in which the movie takes place.

"I find this not just with casting Honor, but casting other people, there's always something I observe in them that interests me that I want to take further," Hogg tells me at A24's New York office ahead of the film's release. "And there was something I saw in Honor. Just the way she saw herself and some vulnerabilities that I thought connected with how I was at that time."

In the film, Byrne plays Julie, a film student in early '80s England. She's in a relationship with a somewhat older man named Anthony (Tom Burke), who starts living with her — and asking her for money and doing a number of suspicious things — before she finds out he is using heroin. At the same time, Julie is dealing with the fact that she comes from a sheltered background and a well-off family — including mom Rosalind, played by Swinton. She wants to make a film about the working class and is told she doesn't have the right experience to do so.

"What really interested me is that acting wasn't something that she thought about as a career," Hogg says, explaining why Byrne stood out for the role. "So I wasn't looking at her as an actor, I was looking at her as an artist, because she writes very beautifully and she's very artistic." She continues, "I found that when I was looking at actors — because I saw quite a few young actresses — to play that part, and I always had difficulty in seeing them as somebody who would be behind the camera rather than in front of the camera."

Byrne needed to portray a certain naiveté, which was fostered by the way Hogg shot the film. The scenes played out sequentially, with her star learning the story along with her character... including the reveal that Anthony has a substance use disorder.

"What Honor did know, though, was quite a bit about me at that time and the work that I was doing and the stories that I wanted to tell and some of my innermost thoughts from my diaries," Hogg explains. "I also showed her a lot of my photographs and my films from that time, so she was privy to a lot of material, just not the story itself."

While Hogg knew Swinton in the early '80s (the Oscar-winner starred in a few of her film school projects), she's not sure how much Swinton knew of the events depicted in the film. "I was in a bubble with this relationship where friends were a little bit on the outside of that bubble," Hogg says. "I would see her sometimes, but I wouldn't be seeing her all the time, so no one really witnessed that relationship chronologically."

Hogg waited to share this part of her life until now, even though it was something she'd thought about for decades. "Although I first started thinking about making a film about this story as early as 1988, I could never really imagine it, I could never really visualize it." She adds, "I needed that time."

The film, naturally, didn't end up depicting exactly what Hogg experienced. Asked how much is fact, the writer-director says with a laugh, "I'm quite confused now. Starting to believe my own fiction." Her process meant that the project "starts off very personal, as I say, but that's the closest it gets to being my experience, because then once I start casting, I start to allow other ideas to form around the story." Then, with editing, things closed back in and the story was shaped into something more similar to what she imagined at the beginning. "I'm always surprised how it comes back to where it began given how much I open out to the process on the way," she say.

The Souvenir leaves quite a bit up to interpretation, from Julie's motivations (Is she using Anthony for experience? Is she purely naive? Is she just in love with him? Or are all of these things true?) to the title of the movie itself. In its most literal sense, it's named after the Fragonard painting featured in the film; in its most metaphorical, it's about the experiences we take with us for the rest of our lives. There's a few other options, too.

Hogg says that some questions viewers are left with will be answered in The Souvenir: Part II, which has already been announced. "It begins where the last one ends, and it goes more into Julie's filmmaking and how her experience in Part I maybe has some sort of mirror in the work that she's going to do."

When The Souvenir premiered at Sundance earlier this year, it won the festival's World Cinema Dramatic Grand Jury Prize and Byrne was widely praised for her performance. Now that it's out in the world, Hogg says that the hardest thing about making the film was "looking back at myself age 20 to 25, looking myself in the eye. Not a very comfortable thing to do." Having Byrne as a conduit, however, at least made that possible.