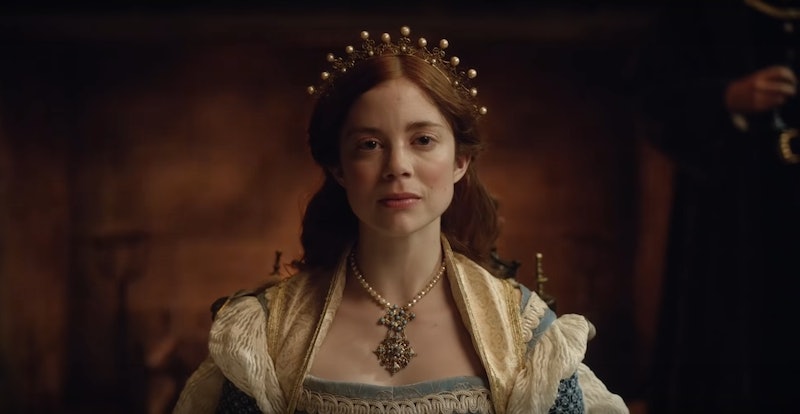 Like The Other Boleyn Girl, which was based on Philippa Gregory's romance novel by the same name, Starz's new historical drama, The Spanish Princess, takes its cues from two other Gregory novels: The Constant Princess and The King's Curse. Rather than focusing on the Boleyn sisters, The Spanish Princess centers around the story of Catherine of Aragon, the first wife of King Henry VIII. Although Gregory's stories are historical fiction, The Spanish Princess is based on the true story of Catherine's journey from Spain to England, and her desire to maintain her country's political alliance — and her life.

Born on December 16, 1485, Catherine of Aragon was the daughter of King Ferdinand II and Queen Isabella of Spain. At just three years old, Catherine was engaged to be married to Arthur Prince of Wales, the son of King Henry VII of England, in order to cement the political alliance between the two nations.

According to the History Channel, Catherine arrived in England when she was 15 years old. After a little over a month, she and Arthur were married on November 14, 1501. Sadly, Arthur died of an illness just a few months after they were married.

Catherine's fate in England remained uncertain for the next eight years. However, per the Historical Royal Palaces (HRP) website — as well as the trailer for The Spanish Princess — young Prince Henry was infatuated with his brother's widow.

HRP notes that Henry "loved her," and the two had a happy relationship at first. "The site states that Catherine was "considered beautiful" and that she shared a many hobbies with her husband, such as hunting. The pair were married in 1509 when Katherine was 23 and Henry was 17.

Aside from young love, there were political motivations involved in Catherine's second marriage as well. Henry VII wanted to hang on to the princess's substantial dowry, the History Channel notes, and both nations were hopeful to maintain their political alliance.

For many years, their marriage was a happy one. Catherine actually had five recorded pregnancies — although the HRP website ventures there may have been another miscarriage — although only one child survived: Mary, born 1516.

Before Mary's birth, Catherine had actually produced a male heir: Prince Henry, Duke of Cornwall, born 1511, per the Tudor Times. Tragically, the baby died after 52 days. However, the Duke of Cornwall's birth, as well as that of his stillborn brothers and sisters, more or less invalidates Henry VIII's later argument that Catherine was unable to conceive children.

By the time Catherine was 41 years old, King Henry had already become enamored with the young and beautiful Anne Boleyn. After promising to marry her, Henry founded the Church of England in order to sever ties with the Catholic Church, which forbade divorce and refused to grant Henry an annulment. Instead, Henry declared himself the head of the new Anglican Church, and divorced Catherine in 1533. Anne Boleyn's wedding and coronation happened that same year.

As Henry worked to end his marriage with Katherine, Katherine herself was stubborn in her refusal to accept his wishes. She had the support of the Catholic Church, and had a reputation as a pious and devoted wife, mother, and queen. She was generally considered to be far more popular than Anne Boleyn. However, she never spoke ill of Henry, even as he did everything in his power to destroy her reputation, separate her from her daughter, and strip her of her rightful title.

It's unclear how closely The Spanish Princess will stick to Catherine of Aragon's original story. Indeed, with historical fiction, writers and directors are often able to take a great deal of creative license, as the exact thoughts and emotions of the historical figures can never been known for sure. The Spanish Princess has a unique opportunity to re-tell a story that has been told many times before, only this time, giving agency to one of the strongest — and most ignored — women of European history.