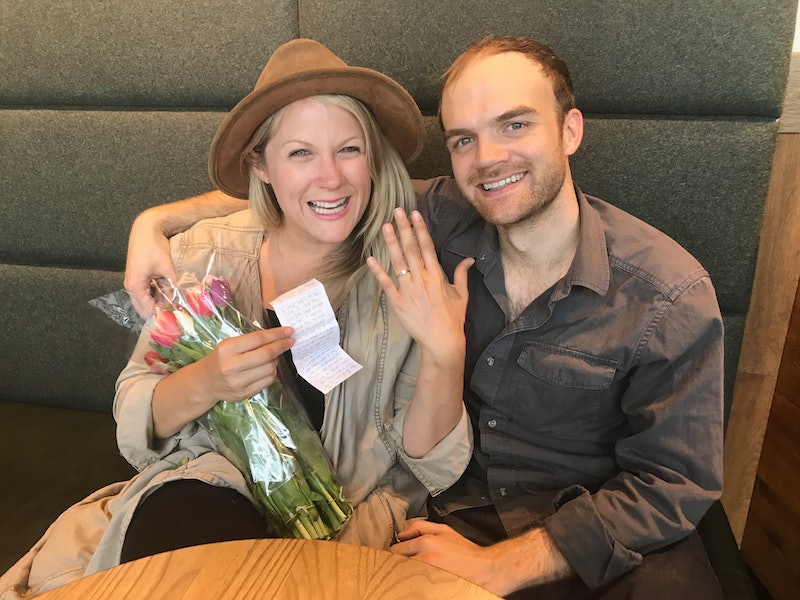 The two met almost ten years ago in Waco, Texas, starting off as just a couple of friends with a lot in common. Mann and Havens are both freelance photographers whose work with nonprofits has taken them all over the world. They each travel over 100,000 miles a year, which works out to be an unholy amount of time spent at the airport. So, it makes sense that an airport is where their relationship would evolve.

A few years after they met, work trips and kismet lead to each of them passing through the Amsterdam Airport Schiphol just a few days apart. When Mann realized Havens would happen to be in the same spot soon after him, he hid a note for her in the airport Starbucks and texted her clues on where to find it. One note turned into another as the two travelled individually from airport to airport, leaving secret Starbucks messages in every place they both passed through from Los Angeles to Cambodia to New Delhi.

After, six years of dating, when the two were ready to get married, Mann knew exactly where he’d pop the question.

A trip back from Tanzania took Havens back through the Amsterdam Airport, the spot where their story started. Havens arrived to a note from Mann with a message on the back telling her to pick up a preordered drink. When she walked up to the bar, Mann was waiting for her with flowers, a ring, and a question.

“I didn’t say yes very loudly because I thought it was just us,” Havens said in a Starbucks press release. Mann hadn’t told her that he’d invited her younger sister to film the moment or that he’d given the baristas a heads up. “Everyone cheered. I had no idea anyone was watching,” Havens said.

While the couple hasn’t set a date or a location, wherever their wedding takes them is sure to be an adventure. Also, if you can make a Starbucks in an airport seem romantic, we’re pretty sure you can make it through anything. “One of the things about marrying Austin is it’s going to be an adventure,” Havens said. “We’ve both lived our lives that way.”

Congrats Austin and Esther! I wish you a latte love in the years to come.

More like this
Why TikTok Is Obsessed With Caesar Salads Right Now
By Alexis Morillo
TikTok's Butter Board Might Be The New Cheese Plate
By Emma Carey
Deliveroo Is Selling Lotus Biscoff Cinnabons Now
By Darshita Goyal
On TikTok, Tinned Fish Date Night Is The Latest Viral Food Obsession
By Emma Carey
Get Even More From Bustle — Sign Up For The Newsletter