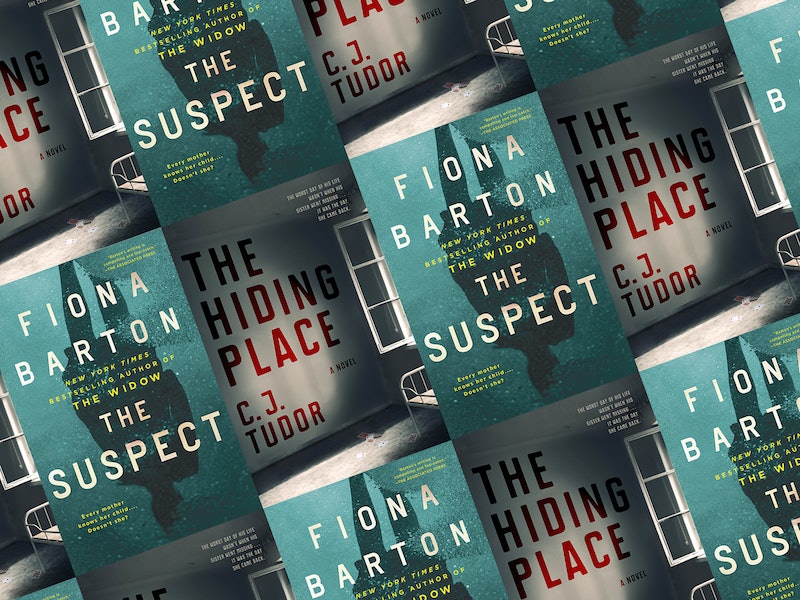 If you're looking for two of the biggest writers of contemporary suspense fiction, look no further than authors C.J. Tudor and Fiona Barton. Barton is a former reporter whose Kate Waters trilogy includes thrillers The Widow, The Child and 2019's The Suspect, which centers on the disappearance of two 18-year old women in Thailand. Tudor — whose horror-esque debut, The Chalk Man made a spooky splash in 2018 — will also return this year with The Hiding Place on Feb. 5, which follows a teacher with a hidden agenda who returns to settle scores at a school he once attended — only to uncover a darker secret than he could have imagined.

Clearly, Barton and Tudor have cemented their places as writers with a few devious tricks up their sleeves, but what really goes into writing books that will keep readers on the edge of their seats? For Tudor, a lot of her spookiest inspiration comes from her own life.

"I draw on a lot on stuff that’s happened to me, or places I know," Tudor tells Bustle. "The Chalk Man was about being a pre-teen in a small town in the 80's... [and] The Hiding Place draws heavily on my time at senior school in a small pit village in the north of England."

And while Barton stays firmly outside the realm of horror, she does love to indulge in some real-world creep-factor:

"I love an unreliable narrator," Barton says. "The truth is a slippery beast and we can be led like lambs into a character’s world, sympathizing with them, believing every word before the ground beneath us suddenly shifts and we realize we know nothing."

Keep reading for more of Tudor's and Barton's thoughts on everything from the struggles of writing a second book, to the media they consume when they need a break from their own eerie creations, and, of course, the weirdest things they've ever Googled in the name of research:

What are some of the difficulties of writing a second book? What is easier about the process?

C.J. Tudor: I actually wrote most of The Hiding Place before The Chalk Man was published. I think that made it easier. Book 2 is always harder because there is expectation, especially if your first book has done well. On the plus side, I suppose you know that, hopefully, people will want to read it. Also, I juggled writing The Chalk Man with my job as a dog-walker, but with Book 2 I had the luxury of writing full time. But I don’t think the process gets easier. I’ve found Book 3 the hardest of all! I don’t know, what about you Fiona?

Fiona Barton: I felt huge pressure fueled by the legendary second album paranoia. The thing is, no one knows you are writing the first book so you can pootle along, letting it all cook in your head, move sentences around a hundred times and leave it for weeks on end. But book 2 is a whole other story (in every sense…) The success of The Widow meant there were expectations for the second book from the first word and it created a completely different writing experience. Not to say I didn’t enjoy writing The Child but there were times when I felt as if I was wrenching it out of my body with bloodied fingernails! And I wept when I wrote the final scenes. They may have been tears of relief, but I have learned (boy, have I learned.) I realized that writing is not all about putting fingers on the keyboard. As I sweated over my endless edits on The Child, I understood that I needed to spend more time thinking than typing. I found my writing rhythm and factored in long walks and staring at walls so that storylines and my characters could cook in my head.

"The thing is, no one knows you are writing the first book so you can pootle along, letting it all cook in your head, move sentences around a hundred times and leave it for weeks on end."

Are either of you inspired by real life events in the writing of your books?

CJT: I draw on a lot on stuff that’s happened to me, or places I know. The Chalk Man was about being a pre-teen in a small town in the '80s (as I was) and a homage to all the stuff I loved at that time, especially horror! The Hiding Place draws heavily on my time at senior school in a small pit village in the north of England. But my characters aren’t based on me or anything I’ve done. I tend to write in gender opposite, and I like inhabiting characters who are different from me.

"I draw on a lot on stuff that’s happened to me, or places I know."

FB: Always. I can invent motives and twists, inner voices, events and feelings but everything I write is fed by my experiences as a reporter. I have the best imaginable cast of characters to draw on, having spent more than 30 years watching and listening to people caught up in dramas, tragedies and conflicts. I like to root my stories in real life so I can sniff the air, see the colors, hear the voices — I suppose it is the journalist in me, fighting against flights of fancy.

What's the creepiest, weirdest, or funniest thing you’ve Googled or researched for a book?

CJT: I recently Googled "Decomposition in a locked car boot," "How to Access the Dark Web" and "Biblical quotes about revenge and retribution." I’m expecting a knock on the door any day!

What books are you reading, what podcasts are you listening to, or what movies you are watching?

CJT: I’ve never listened to a podcast (I’m a bit of a Luddite!) I’m reading The Killer in Me by a fantastic Irish author called Olivia Kiernan, and the last films I watched were Baby Driver, on DVD, and Mary Poppins Returns with my little girl at the cinema!

FB: Deeply jealous of Mary Poppins (hoping to persuade my tomboy granddaughter it’s a good idea). Just finished reading Jane Casey’s latest crime thriller, Cruel Acts — fantastic storytelling and ballsy woman detective — and about to start The Boy in the Suitcase by Lene Kaaberbol (note to self — emergency PG Wodehouse needed). Listening to the brilliantly poetic Reservoir 13 by Jon McGregor on audiobooks and saw the very touching Stan and Ollie at the cinema.

What are some of the differences in writing male and female protagonists, especially when writing crime novels and thrillers, where the issue of women's safety is much more prominent?

CJT: I really don’t think there is much difference actually. I’m very comfortable writing male protagonists (conflicted, slightly weird male protagonists!) but I like to think my secondary female characters are interesting in their own right. I kind of hope the heyday of the neurotic, unreliable female narrator in crime fiction is done. I want to read about strong, capable female characters. That’s what I like about Fiona’s books. Her protagonist, Kate, is intelligent, tough and good at her job. Not a victim!

FB: I choose manly women narrators because I like the idea of women driving the action in psychological thrillers rather than simply being the corpse in the ditch. But like C.J., I don’t feel much of a difference when I’m writing men or women — the difference is more about the individual experience of each character. So, when I write my journalist Kate, I feel like I am coming home because, although we don’t share DNA, we know each other very well. But when I wrote Glen, the husband in The Widow, I had to stand in his head and look out of his eyes. Very creepy but when I wrote his chapters, I lost time completely.

"I choose manly women narrators because I like the idea of women driving the action in psychological thrillers rather than simply being the corpse in the ditch."

How do each of you plot out the twists in your books? Do you outline? Are you ever surprised by your own twists?

CJT: I never plan or outline — I just dive right in and see where I end up. The characters and plot develop along the way. For me, that keeps it interesting and the book often ends up going in directions I didn’t expect. I figure if I’m surprising myself, I’m surprising the reader.

FB: C.J. and I sound like sisters from another mother… I’m also a plunger not a plotter. I do dirty writing — chucking everything down on the page and then clean it up afterwards. My poor editors are probably tearing their hair out, reading this (sorry!) but spreadsheets and plotting each chapter would kill me. I don’t want to write a book twice. As to twists, I have had to quickly unlearn front-loading — as a reporter you tell the whole story in the first paragraph (not great for thrillers) and develop my drip, drip, drip skills.

What are some of your tricks for effectively shocking your readers?

CJT: Creepy dolls. Chalk men? Haha! I don’t know about "shocking," but I like to misdirect and surprise readers. A shock ending is no good if it just leaves the reader feeling cheated. You should always earn your ending.

FB: C.J. is the Queen of Creepy — I was kept wide awake the night I read The Chalk Man. Not sure if shock is my style. I don’t do explicit violence or gore — I hate reading it so can’t write it. But I love an unreliable narrator. The truth is a slippery beast and we can be led like lambs into a character’s world, sympathizing with them, believing every word before the ground beneath us suddenly shifts and we realize we know nothing. I like the uncertainty of the disconnect between what people say and do — and the delicious realization that nothing is what it seems.

The Suspect by Fiona Barton is available now, and The Hiding Place by C.J. Tudor is available for pre-order and out on Feb. 4.