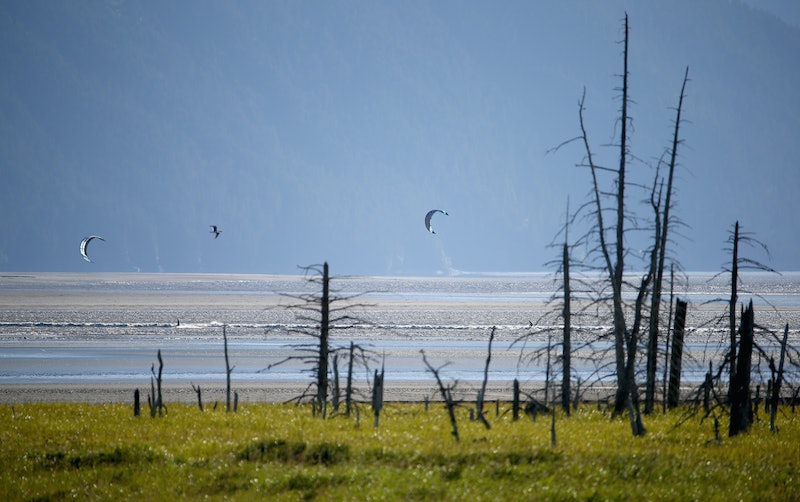 If you visit Anchorage, Alaska in the early spring, it's reasonable to expect that you'll still find snow cover — but not this year. Anchorage's warm temperatures are breaking records this year, and it's just another part of a very troubling trend.

As of March 31, there was officially no more snow on the ground in Anchorage after 18 straight days of temperatures reaching above 40 degrees, according to CBS News. If no more snow falls, then this will be the fourth earliest time that the snow cover has disappeared from Anchorage — and the record for that came just three years ago, on March 22, 2016, as CBS News wrote.

The Arctic is one of the regions most affected by climate change, according to the 2018 National Climate Assessment, so it follows that Alaska, as the only state situated in the Arctic region, is the state warming the fastest. While the assessment details the numerous potential long-term repercussions of climate change for the people who live and work in Alaska, the effect is currently most visible in the warm spring days they're seeing. For the few people who live on Alaska's northern coast, it's even more pronounced — these villages on the Arctic Ocean experienced temperatures up to 40 degrees higher than normal on Saturday, according to CBS News.

Scientists have known for years that the North and South poles were warming faster than anywhere else on the planet, according to NASA. From about 1970 to 2010, the Earth warmed about 1.5 degrees on average — but the Arctic warmed 3.5 degrees. This has resulted in some momentarily funny comparisons — like about how it was colder in Pittsburgh than in Anchorage on the last day of March, as the Pittsburgh local CBS affiliate wrote — it's actually an incredibly serious problem.

Beyond bringing summer early to the good people of Anchorage, warmer temperatures in the Arctic mean melting glaciers and sea ice, which have the potential to raise the global sea level significantly, according to Interesting Engineering. Scientists also believe that warmer air in the Arctic region could weaken the jet stream, which has a big effect on weather in the Northern hemisphere. That could lead to more frequent severe weather events, like this winter's polar vortex.

Warming temperatures are also a problem for arctic wildlife, as WWF explained, because the animals depend on sea ice for hunting and their reproductive cycles. While fewer polar bears may tug on your heartstrings more, in a practical sense the biggest threat in this sense is to arctic fisheries, and to the people who depend on them for their food and livelihoods.

The Arctic right now sits in the most delicate balance, and the life that it supports is already in great danger no matter what humans do to slow the warming processes already underway, according to The National Geographic. Warmer springs in Anchorage are hardly the most important effect of climate change on this region, but they're an obvious one that's easy to recognize even if you're not an expert on the subject. Don't let the nice weather fool you, though — the trend is anything but nice.