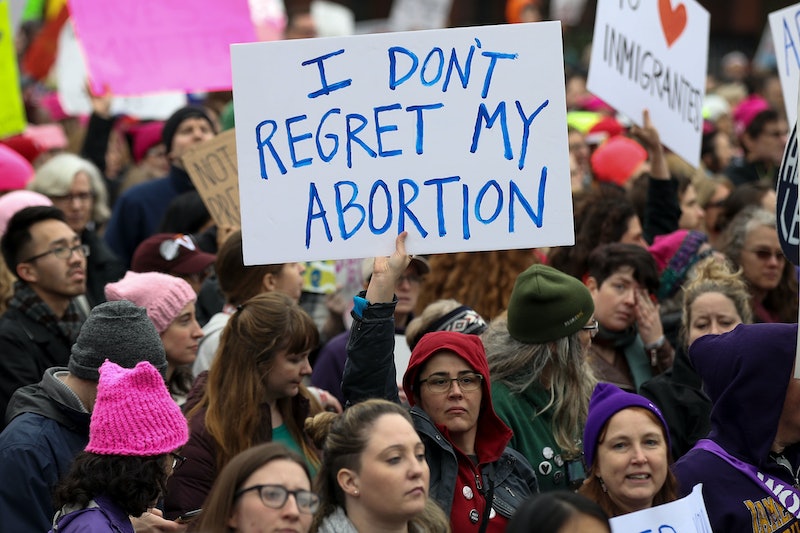 One woman spoke with Bustle writer Bronwyn Isaac about the hardships of getting an abortion in Texas even before the state began its campaign block Planned Parenthood from receiving Medicaid funds. This is her story.

I originally went to the doctor because I could sense something was different about my body. I was 22 in 2012 when I went in for a pregnancy test in Texas, and at about four weeks, I found out I was pregnant.

Finding out I was pregnant was a horrible experience. Initially, because I'd been chatting with the nurses about how I worked with children, they were under the impression that I was hoping for a positive test. When the results came in, they ran in to congratulate me as I sat there sobbing. I was soon informed that only one Planned Parenthood clinic in my city performed abortions.

Due to Texas restrictions, the process was extremely stressful. After scheduling an appointment, I had to wait another week. Since I had at least five weeks before I would even require a surgical abortion, I was low priority. I understood having to wait, considering that at the time there were only 41 clinics in Texas, a state with nearly 30 million residents. When the Supreme Court struck down Texas' House Bill 2 (HB 2), which placed several restrictions on abortion clinics, in June 2016, there were just 19 abortion clinics in the state.

After all, there were women edging on 22 weeks who had to drive more than 100 miles. While waiting hours for my scheduled appointment, I talked to the young woman who was with her mother sitting across from me, they had just driven 150 miles to be there.

Because of Texas law, I knew I'd be required to look at the fetus, and listen for a heartbeat ... My boyfriend nicknamed the fetus "puddle." I think we were both just using this as a coping mechanism.

I was actually on birth control when I got pregnant. I was working two jobs, and realized I'd somehow missed a pill during a heavy work week. While waiting for my appointment, I was able to figure out the exact day I got pregnant. Because of Texas law, I knew I'd be required to look at the fetus, and listen for a heartbeat — so I read everything about the development of the fetus. My boyfriend nicknamed the fetus "puddle." I think we were both just using this as a coping mechanism. I wanted to be as numb as possible towards the pregnancy, so I didn't have a single doubt during the waiting period.

Before being given the pill, the doctor was legally required to give a speech outlining our options if we backed out of the abortion. During the talk, they didn't mention any of the issues women face during pregnancy, just the risks we risked by having an abortion.

When it came to paying for the procedure, I didn't have insurance, I paid out of pocket using a sliding scale. There was a mandatory minimum I had to pay, which I paid at my first appointment. At my second appointment I had to pay the remaining balance, plus $80. The $80 was for a shot I needed because I have a negative blood type (and the fetus had the possibility of a positive blood type). They were able to offer funding through the Lilith Fund, and the National Abortion Federation. Without funding assistance, I would have been required to pay $100 during my first day consultation, another $520 for the medical abortion pill and the $80 for the shot, coming to $700 out of pocket. Because of the sliding scale, I paid the initial $100 consultation fee, $270 for the pill, and the final $80 for the shot, so it totaled at $450. I can only imagine how much worse it would get if all funding was stripped from Planned Parenthood.

The closest Planned Parenthood that performed abortions was 15 miles away. During a mandatory sonogram, I was forced to listen for a heartbeat while they described how far along I was. After that, I had to wait a mandatory 24 hours before being able to receive the pill for a medical abortion.

Before being given the pill, the doctor was legally required to give a speech outlining our options if we backed out of the abortion. The speech was given in a room with roughly 20 women. During the talk, they didn't mention any of the issues women face during pregnancy, just the risks we risked by having an abortion.

However, the doctor giving the speech went on to clarify that while he was required to attempt to dissuade us, the truth was, carrying a baby for nine months and giving it up for adoption was an extremely difficult process in itself.

I have always been pro-choice, but this experience changed the way I felt about the movement. Women should be able to make a choice about their own bodies without so many legal manipulations. Unlike HB 2, the Abortion Sonogram Law is still in place mandating that women receive a sonogram before waiting 24 hours for an abortion.

Women have won our right to choose; we just need to keep it.

The whole procedure made it clear that state lawmakers were attempting to control my body through asinine laws fueled by guilt and shame. The abortion laws in Texas are manipulative attempts that just barely fall short of breaking our constitutional rights. They pass laws that are often later found unconstitutional. They know these laws will most likely be overturned, but the process takes years.

All the care I've ever received from a Planned Parenthood has been necessary to both my health, and the health of my partners. I rely on Planned Parenthood for pap smears, for birth control, to see if I've developed ovarian cysts, and to help my hormonal acne. When Texas chose to remove Planned Parenthood from Medicare funding in December 2016, I was terrified that I wouldn't be able to afford my annual exam, that I'd have to rely on the expensive clinics at pharmacies for testing when I had a urinary tract infection. These are all needs that also apply to a woman who isn't sexually active.

I'm afraid that conservative states and Congress will use the current administration to their advantage to continue to float invasive laws through the legal system while Trump is our president. We, as a nation, need to stop making it harder for women to have access health care. Roe v. Wade happened in 1973. Women have won our right to choose; we just need to keep it.