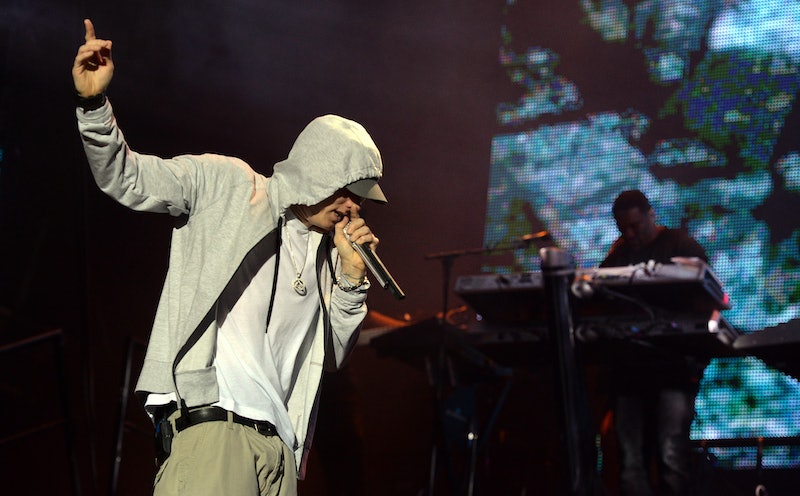 On Monday evening, Eminem performed on the BET Hip Hop Awards for the first time since 2011 with a striking performance condemning the president. Indeed, the transcript of Eminem's Trump freestyle shows that the rapper finds Trump's actions around a variety of issues incredibly problematic, including his use of Twitter, his antagonism of other countries, and his treatment of Puerto Rico post-hurricane, among others.

Eminem's performance at the 2017 BET awards, which aired on Tuesday night, was revealed by DJ Khaled, the show's host, only earlier that day — surprising many who had been eagerly awaiting Eminem's return to the show after being absent for six years.

For his four-and-a-half minute performance, known as "The Storm," Eminem performed acapella and gave a rousing condemnation of Trump. The rapper opened his performance by criticizing Trump's apparent recklessness in regards to foreign affairs as well as by praising former President Barack Obama. The transcript of the rapper's lyrics reveals the depth of this critique, with Eminem saying,

But we better give Obama props, 'Cause what we got in office now's a kamikaze. That'll probably cause a nuclear holocaust. And while the drama pops and he waits for shit to quiet down. He'll just gas his plane up and fly around 'til the bombing stops. Intensities heightened, tensions are rising. Trump, when it comes to giving a sh*t, you're stingy as I am.

Later in the song, Eminem proceeded to slam Trump's Twitter use, suggesting the president uses the outlet and various tactics, like critiquing NFL players for kneeling during the playing of the national anthem, as a means of distracting Americans from other issues. As the rapper put it:

Plus, he gets an enormous reaction. When he attacks the NFL so we focus on that/Instead of talking Puerto Rico or gun reform for Nevada. All these horrible tragedies and he's bored and would rather/Cause a Twitter storm with the Packers.

Eminem also did not hold back when further sharing his sentiments about Trump's treatment of NFL players who kneel during the national anthem as a means of protesting racial injustice — and expressed disdain for Trump's claim that those who kneel during the anthem do not respect the military. He also condemned the president for his treatment of minorities in general, patently calling the president a "racist" and saying,

The rapper ended his performance with a direct appeal to his fans, telling them that they can either be a fan of his or a fan of Trump's, but not both, saying, "I'm drawing, in the sand, a line. You're either for or against. And if you can't decide who you like more and you're split/On who you should stand beside/I'll do it for you with this: "F*ck you!" Eminem's last words implored "the rest of America" to "stand up" saying, "we love our military and we love our country but we f*cking hate Trump."

Many reactions to Eminem's anti-Trump rap on Twitter were very praiseworthy, with fans calling the performance "brave" and "potent." Colin Kaepernick, whom Eminem directly referenced in his performance, also tweeted to the rapper that he "appreciated him." However some on Twitter were more critical, critiquing the rapper for condemning Trump's extravagance while he is a wealthy entertainer himself.

Those on Twitter, and beyond, are likely eagerly watching to see if Trump will respond to Eminem's eviscerating rap, the highly critical nature of which is fully revealed by the transcription of the powerful lyrics. If the president does indeed respond to the performance, it will certainly be interesting to see what exactly he has to say.

More like this
Mel C Wants You To Know That Margaret Thatcher Wasn’t A Spice Girl
By Darshita Goyal
Two UK Cities Are Now In The Running To Host Eurovision 2023
By Sam Ramsden and Rachel Mantock
Everything To Know About Taylor Swift’s 10th Studio Album, 'Midnights'
By Grace Wehniainen and Jake Viswanath
Beyoncé’s Special Tribute To Sister Solange Was Both Touching & Hilarious
By Stephanie Topacio Long
Get Even More From Bustle — Sign Up For The Newsletter